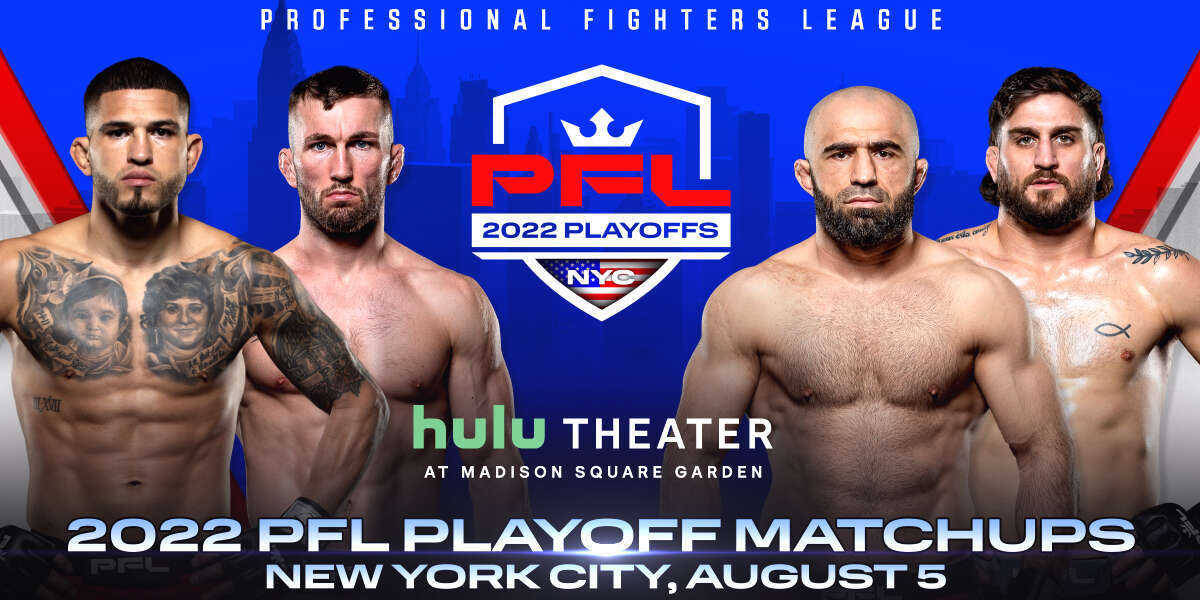 NEW YORK (JULY 8, 2022) - The Professional Fighters League (PFL), the fastest growing and most innovative sports league in the world, today announced the finalized 10-fight card for the first Playoff event of 2022 to be hosted at Madison Square Garden’s Hulu Theater on August 5 and broadcast on ESPN networks and streaming platforms.

The PFL’s return to New York City will be headlined by MMA icon and top-seeded Lightweight Anthony Pettis, who will be looking for revenge in a rematch with Scotland’s Stevie Ray in the main event of the ESPN card. Pettis secured a first-round finish in his opening round bout with Irishman Myles Price and seemed to be cruising against Ray in his final Regular Season fight before Ray turned the tables on him with a highlight-reel submission via modified twister. Pettis had already locked up the top spot in the division but will have to figure out a way to dispatch Ray if he wants to have a shot at the 2022 PFL Lightweight World Title.

The co-main event on ESPN will feature Josh Silveira, son of legendary MMA coach Conan Silveira, earned a knockout and six points in his single Regular Season, stepping into the SmartCage against fellow American Top Team member Omari Akhmedov for a chance to head to the Championship event later this year. Akhmedov finished both of his opponents to sew up the second seed and heads into the postseason as one of the favorites to take home the 2022 title. Silveira was a 2022 PFL Challenger Series competitor who brings an impressive undefeated record into his first Playoff fight. The former LFA middleweight and light heavyweight champion is looking to add PFL gold to his trophy case.

“We are excited to kick off the 2022 PFL Playoffs in New York City at Madison Square Garden’s Hulu Theater,” said PFL President of Fighter Operations Ray Sefo. “This is what that the PFL athletes have worked all season for, a Playoff opportunity and the chance to advance to the PFL World Championship.”

In 2022 Olivier Aubin-Mercier has been on a mission to fulfill his Playoff destiny. OAM will take on Alexander Martinez who earned a close decision over fan-favorite Clay Collard to punch his ticket to the Playoffs. Both fighters will be looking to move on to the 2022 PFL World Championship and the $1 million prize that goes with it.

Robert Wilkinson made short work of both of his Regular Season opponents to clinch the top spot in the Light Heavyweight division. He’ll square off with surprise entrant Delan Monte who stopped 2019 Champion Emiliano Sordi in a stunning first round knockout to earn his spot in the postseason. Wilkinson will be a heavy favorite but Monte has shown he will not be deterred by long odds.