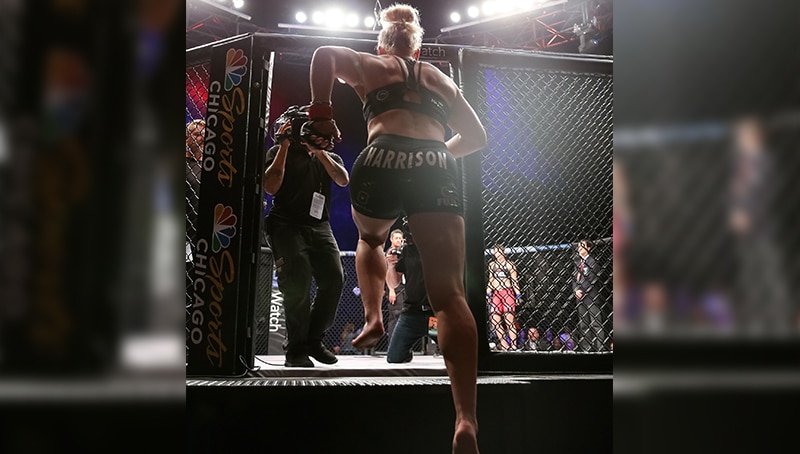 3 Things We Learned at PFL 2 in Chicago

Harrison won the 2012 and 2016 Olympic Gold Medals in Judo. She set her sights on MMA in 2016 and finally made her debut at the Chicago Theater. Harrison walked forward with her hands up and head down. She got to the clinch and things quickly went downhill for Elkin. Harrison tripped Elkin to the canvas and had her way. She controlled Elkin on the ground and delivered punches before taking Elkin’s back. After initially threatening with a rear-naked choke, Harrison transitioned to an armbar and forced Elkin to tap out.

In her first fight, Harrison admitted to being nervous, but there’s no pressure like an Olympic final. “No one has ever locked me in a cage and told me to try and go kill someone before,” she said about the pressure of her MMA debut.

One of the biggest female prospects to enter MMA, Harrison doesn’t care who she faces next. She’s out to prove that she’s the best female fighter in the world.

“I have a goal and that’s to be the best in the world. So whoever wants to come and step in the cage with me, let’s do it,” she said following her first professional MMA win.

2. Will Brooks Dominated, but Needs Points In Next Fight

Former Bellator MMA lightweight champion Will Brooks made his PFL promotional debut in the featured fight of PFL 2 against Luiz Firmino. “Ill Will” picked up a unanimous decision win but finds himself needing points to advance to the seasonal playoffs. He earned 3 points for the win but will likely need a finish in his next outing to have a shot at the million-dollar payday at the end of the year.

Brooks has the big-fight experience and a skillset to be the favorite in the lightweight tournament, but that doesn’t always translate into accumulating the points needed to secure a spot in the playoffs.

Controversy reared its unwelcomed head in the lightweight bout between Efrain Escudero and Jason High. High was seemingly in control of the fight heading in to the final frame. He changed levels in an attempt to take Escudero down and Escudero quickly applied a guillotine choke.

High was defending the choke and the referee stepped in to stop the fight. High immediately protested with emotion saying that he didn’t tap out. The replay seemingly favored High’s complaints but after reviewing the footage the Illinois Athletic Commission ruled in favor of the referee’s decision to stop the fight. High’s actions next could result in punishment from the commission.

High stormed out of the cage and shoved over chairs on his way out to the back of the Chicago Theater while yelling in protest of the stoppage. With the commission reviewing the tape and confirming the referee’s decision, the win for Escudero stands.

The post 3 Things We Learned at PFL 2 in Chicago appeared first on Professional Fighters League.