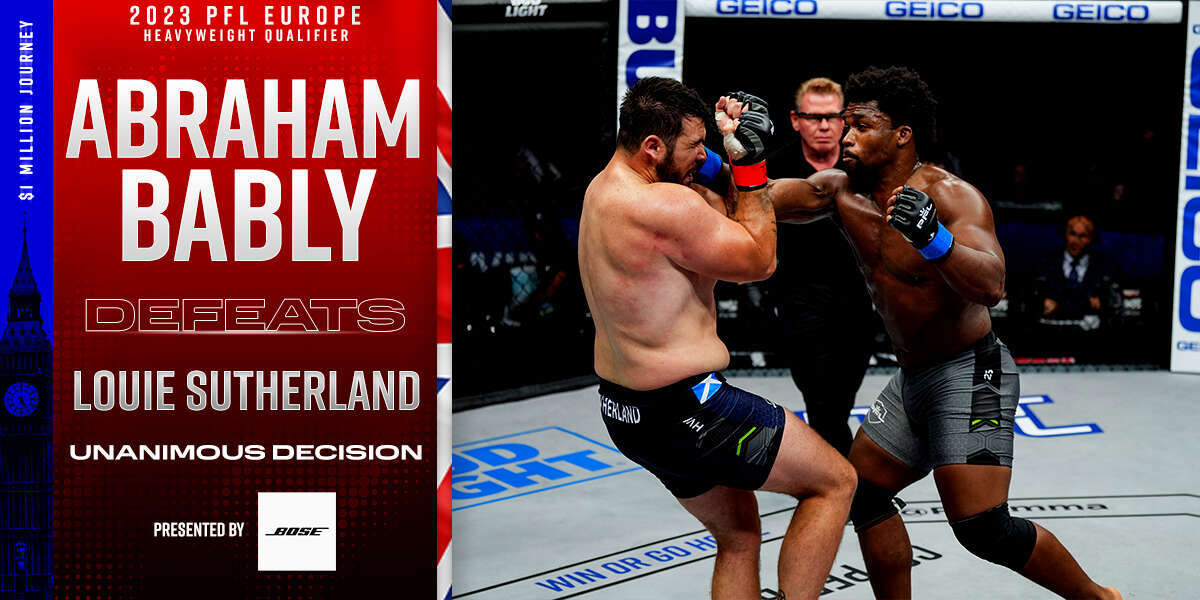 In the final 2023 PFL Europe Qualifier of the evening, 2 Heavyweights collide as Louie Sutherland (4-0) takes on Abraham Bably (1-0) in a battle of undefeated prospects both fighting out of London in front of their home crowd.  Though Bably may be a bit short on pro experience, he finished 4 straight amateur bouts prior to also finishing his pro debut.

The fighters touch gloves and we’re underway! They exchange kicks early as neither fighter seems to want to rush into the pocket. Bably is doing a good job attacking the lead leg of Sutherland early as Sutherland again misses on a big front kick.

Sutherland bullrushes Bably, eating another heavy lowkick on the way in before being revered and eventually taken down by Bably.  Bably quickly transitions from side control to the back but Sutherland doesn’t allow Bably to get his hooks in and is able to shake him off and get back to the feet.

Bably again starts attacking the takedown, eventually dragging Sutherland back down to the mat and starting to throw some nice ground and pound. Again Bably attempts to take the back but Sutherland is defending well and not letting him establish control.

Sutherland is again able to return to his feet but he can’t seem to shake Bably who is still heavy on top and making Sutherland carry his weight against the fence, firing the occasional heavy left hand in the process.

Sutherland gets a front headlock and lands a massive knee to Bably’s head before they break.  Sutherland gets overzealous and rushes in again only to be taken down again.  This time, Bably secures the back control but he’s a bit high and Sutherland is able to eventually sneak out the back door and shake him off as both men land some big strikes in the clinch as the round comes to a close.

The 2nd round begins and Sutherland appears a bit fatigued here whereas Bably still looks fairly fresh.  Bably lands a big left hand over the top but again the output is notably down for both fighters early in this round as Bably lands a nice low kick and dips out of the way of a big counter right from Sutherland.

Sutherland lands a jab but Bably comes back with a big counter left that lands flush and backs Sutherland up.  At this point Bably seems to be winning every exchange in this round as he changes levels and drives hard through a double leg takedown, finishing it and once again looking to take the back of Sutherland.

Bably has done a good job of making Sutherland carry his weight in this fight as Sutherland gets back to his feet only to be taken down again but he uses Bably’s momentum against him and quarter rolls through to a neutral position, returning to his feet.

Bably goes back to the low kick and Sutherland seems a bit worried to go first at this point as Bably has had the speed advantage with the counters all night.

Neither fighter throws much of anything for the final 30 seconds of the round as the pace seems to be exacting its toll on the big boys.  The round comes to an end and we’ll see if Sutherland can pull a rabbit out of his hat here, more than likely down 2 rounds and in need of a finish.

Sutherland again goes to that front kick he’s thrown but hasn’t landed all night and both men appear completely fatigued at this point.

Sutherland lands a nice jab but Bably is quickly moving laterally and out of danger. It’s intrigiuing that Bably hasn’t gone back to the wrestling where he had so much success earlier.

90 seconds into the round and the output has been negligible so far.  Bably changes levels and looks for the takedown once more but he may not have the energy to finish as he seems content to sit in the clinch and throw some short punches knowing he’s likely up 2 rounds on the judges cards.

They break from the clinch and Sutherland just misses on a big left hand before Bably changes levels again, dropping for a single leg but having trouble finishing it as Sutherland briefly looks for a kimura.  Sutherland makes a mistake and gives up his back and Bably is right back on, forcing him to carry the weight and landing some small shots.

Bably is firmly in control with a minute remaining, doing some damage with back control as Sutherland appears completely spent and turtles up despite not being hit with anything heavy.

The 10 second clapper hits and Sutherland attempts to get back to his feet but is unsuccessful and the fight will end with Bably on the back.