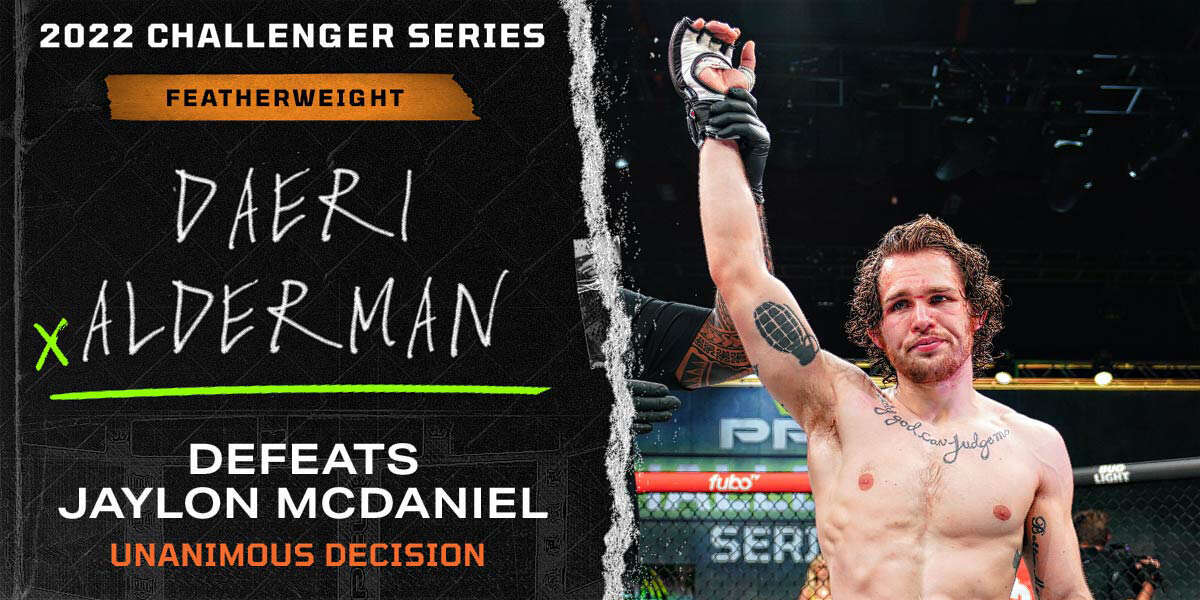 Week 7 of the 2022 PFL Challenger Series is here –– and what a night this promises to be.

Pro debuts always bring a little extra sauce to the table, and Week 7 is, well… saucy.

Every single fight on the card matches a pro debut vs. another pro debut, giving fans a special evening that could mark the very beginning of a future champion’s journey.

Here’s what went down inside the cage:

No touch of the gloves … just McDaniel absolutely cracking Alderman with a crispy clean 1-2.

Alderman touched the canvas briefly and dove in for the takedown immediately. Talk about a way to kick off your pro debut!

Alderman survives, though, and he continues to drive for the takedown here. After about 30 seconds, he gets it, planting McDaniel on his butt. That’s short-lived, and McDaniel springs right back to his feet, where they clinch against the cage. McDaniel works some nice body shots here from the clinch as Alderman continues to search for the takedown.

Now, Alderman’s looking for a leglock, diving on it but not getting it, and McDaniel turns the tables, firing away with shots as Alderman turtles. They scramble to the cage, Alderman looks for a kimura, but nothing’s there and McDaniel continues to work some ground-and-pound.

He’s feeling it here, landing some hard shots on Alderman. Despite getting taken down once, this is a picture-perfect start for McDaniel, who has looked ultra dangerous from the first five seconds of this fight. Alderman scrambles back to his feet, and McDaniel is immediately looking for a guillotine –– but opts to just knee him viciously in the face instead.

This kid is on fire early. Alderman’s right back on his legs trying to drag the fight back to the floor. Instead, it’s McDaniel reversing position and going back to work with ground-and-pound. Once again, Alderman’s looking for a heel hook, but it’s not there.

The round ends with McDaniel peppering away from the top.

They’re off for Round 2, and things have become noticeably slower here, with each guy showing some caution. Alderman shoots for a double, and McDaniel completely plays the role of matador and “oles” his foe.

Alderman is nothing if not persistent though, and he’s right back after it, snapping McDaniel to the mat. This time, Alderman looks to have some solid head position and control. He’s going to work from the top, landing some short shots and moving into half guard.

McDaniel bumps and recovers full guard, moving quickly to a butterfly guard, where he can look to sweep and/or create space.

Alderman passes directly to side control instead, but McDaniel quickly recovers half guard. The round ends there, with McDaniel still on his back. Nice bounceback from Alderman there, and this one likely comes down to whoever can steal Round 3.

McDaniel throws a 1-2 early, but Alderman avoided that one nicely. Nice right hand from McDaniel there catches Alderman’s attention. He has some deceptive range on the feet, no doubt.

Alderman’s in on a shot now, and McDaniel counters amazingly with a reverse triangle, only to get dumped on his back in return. That was a fun sequence, and it ends with Alderman on top, working from McDaniels’ guard.

Alderman grinds away there for a bit, but McDaniel kicks, creates space, and gets back to his feet, only to re-engage in a clinch against the cage. McDaniel briefly threatens a guillotine before trying to take Alderman’s back. His aggression is not rewarded, and Alderman scrambles, achieving top position once again in the process.

The fight ends with McDaniel getting to his feet just as the bell sounds. That was a fun way to open the show and a great pro debut from both fighters.

As the commentators noted several times, the bar has been raised for pro debutants in MMA, ladies and gentlemen. Those were two skilled, well-rounded competitors.

OFFICIAL RESULT
In the end, the judges agreed: One fighter won Round 1 –– and the other guy won Rounds 2 and 3.