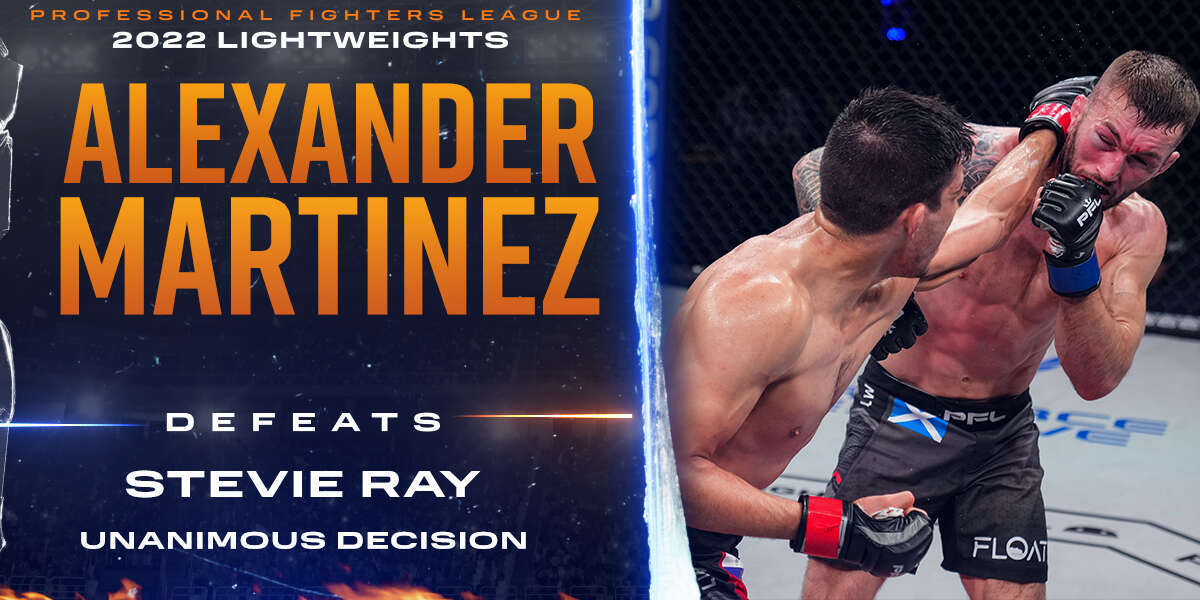 In our first lightweight bout of the night, longtime UFC vet Stevie Ray ends his retirement to enter the PFL SmartCage for the first time.  His opponent, 2021 Lightweight Semifinalist Alexander Martinez looks to get back in the win column after being bounced from the playoffs by Loik Radzhabov last year.

Some feeling out early, Martinez opens up with a few front and side kicks while Ray shows a lot of level changes and occasionally fires his left. 90 seconds in and neither man has really established their offense.

Martinez nearly lands a high roundhouse kick but Ray shrugs it off, resets, and returns fire with a nice body straight.  Martinez attempts to frame off with his lead hand and grazes Ray’s eye halfway through the round.

After a brief pause, they get right back to it.  Ray makes a mistake on a takedown entry and Martinez winds up on his back.  Ray does a good job of keeping his composure and getting back to his feet.

In easily the best exchange of the fight so far, Martinez lands a jab and a hook and changes levels for the takedown, and gets it.  Ray attempts to sweep but is unsuccessful and winds up on his back. Ray closes the guard and tries to attack a few subs, but Martinez is wise to it and there’s nothing there.  Martinez gets up and looks to get off some big ground and pound.  Not much there, but he dives back in with under 10 seconds in the round and gets a few small shots off.

Not a ton of activity in either direction but Martinez had the bigger moments.

Martinez clearly liked the success he had in the grappling exchanges in round 1 and looks to go right back to the mat.  Martinez gets the takedown and Ray starts looking for the rubber guard.  They get back to the feet and Martinez throws a high kick on the break, nothing doing.

OH! Out of NOWHERE, Ray launches a straight right down the middle and drops Martinez like a bag of potatoes.  Ray chases him to the ground looking for the finish, but Martinez recovers well and is eventually able to get back to his feet.

Not out of danger yet though as Ray starts attacking a leglock!  It gets a little sticky for Martinez for a brief moment, but he’s able to weather the storm and then winds up on top.  Hell of a round so far as Martinez starts to do some damage from the top position.

Ray, a blackbelt in his own right, is able to get back to his feet and they end the round SWINGING with Martinez probably getting the best of the last exchange.  Brutal fight to score, but the knockdown for Ray was closest to ending the fight.

And we’re back for round 3, after a few seconds of feeling out, Martinez overcommits on a punch and Stevie Ray smartly jumps on the single-leg and gets a takedown of his own.

In doing so, Martinez is able to reverse position and sweep to the top.  Lots of fun, high-level scrambles in this round, the grappling fans delight!

With 1:15 remaining in the round, they bring the doctor in for a cut above the eyebrow of Stevie Ray whose face is showing some clear damage as his right eye may be starting to swell shut.  The desk seems to think the cut was caused by an inadvertent headbutt.

The doctor is gone and these boys are back to swanging and banging!  Martinez is doing a great job mixing in his kicks and winning these striking exchanges, even if it’s just barely.  Ray gets wild with a punch and Martinez capitalizes by getting the fight to the ground once again and closing out the fight with some ground and pound.

More than likely Martinez won 1 and 3, but what a fun scrambly fight to kick off the regular season for PFL’s lightweights.

VERY surprised at 2 30-27s, but so it goes! Great lightweight opener!