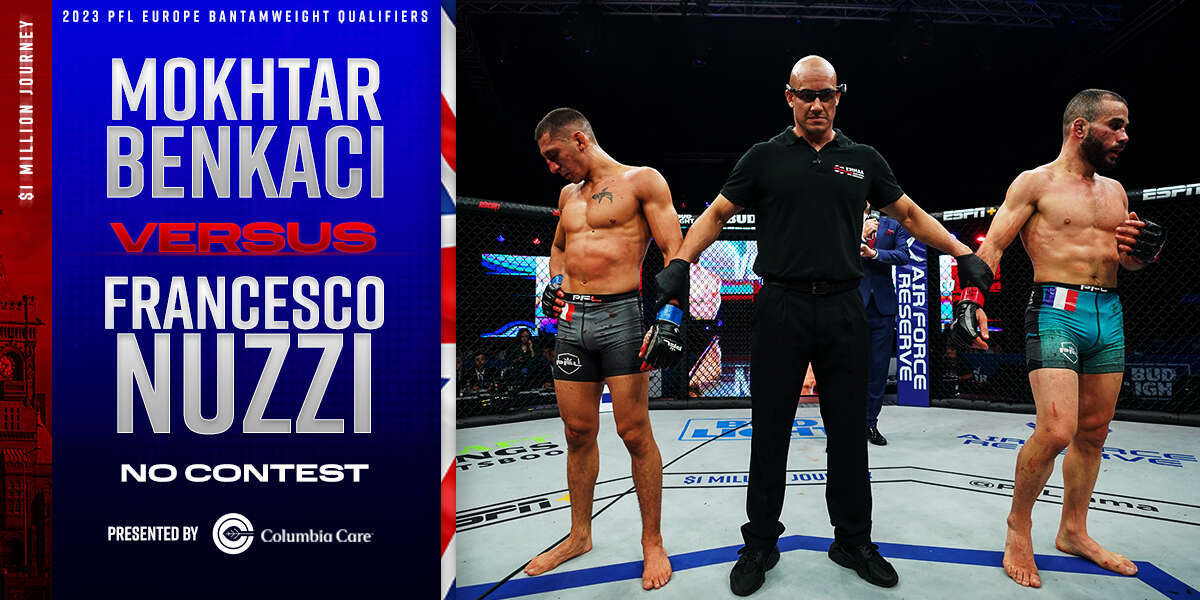 We’re back to ESPN+ for the rest of the PFL Europe Qualifiers! Kicking us off is a pair of well credentialed Bantamweights in Mokhtar Benkaci (20-7) and Francesco Nuzzi (9-1) it’s win and you’re in for these men who ride 6 and 8 fight win streaks into this bout respectively. Interestingly, both fighters' last wins came outside of MMA, with Benkaci winning a boxing bout and Nuzzi winning a pair of grappling contests. Between the two fighters, they have not lost in over 13 years and something’s gotta give tonight in the SmartCage!

The fighters touch gloves and we’re underway in our PFL Europe Qualifiers! Nuzzi opens with a high kick that Benkaci is able to deflect and Benkaci returns with a kick to the body.

Nuzzi fires a low kick and Benkaci makes him pay with a quick lead hook to cross combo, forcing Nuzzi to exit the pocket and retreat.

Benkaci lands a nice right cross but Nuzzi fires right back in what has been a back and forth affair through 90 seconds with neither fighter able to take a big lead as Benkaci lands a big left hand, probably the most significant strike of the bout so far.

Nuzzi throws the high kick again, almost lands, and follows it up with a big left hand that gets through.  It appears the earlier hook from Benkaci split open a cut above the right eye of Nuzzi.

Nuzzi is content to fight behind his kicks, firing a body roundhouse that Benkaci counters with a left hook as both men land in the exchange. Nuzzi looks for a flying knee and Benkaci inadvertently lands to the groin on the way in and we’ll have a break in the action.

Another nice left hook lands for Benkaci right on the already open cut of Nuzzi. They’re really swinging now with both men landing heavy hooks in the pocket.  Nuzzi lands yet another high kick but somehow Benkaci is unfazed, showing off a granite chin early.

Benkaci decides to change the strategy and drops for a single leg but Nuzzi is quickly able to move out of danger.

As the round winds down Benkaci lands BIG and knocks Nuzzi down! Nuzzi gets on his bike and runs along the SmartCage to try to get out of danger as Benkaci chases him and lands again, knocking him down a 2nd time as the round ends! We’ll see if Nuzzi is able to recover on the stool after he was hurt badly there.

Mokhtar Benkaci drops Nuzzi at the end of the 1st round! Nuzzi gets saved by the bell 🔔🔔#PFLPlayoffs LIVE NOW
🇺🇸 ESPN+
🌍 https://t.co/jPNvomkWj8 pic.twitter.com/baIKJv82L1

Nuzzi comes out swinging and seems to have his wits back about him, landing a nice left as Benkaci tries to enter the pocket.  Both men have some success with low kicks before Benkaci goes up top with a barrage of punches once more but Nuzzi is able to defend well and reset.

Nuzzi catches a front kick from Benkaci and lands a nice left hand off of it, forcing Benkaci to retreat but again Benkaci is straight back to pressuring hard and lands a big left, dropping Nuzzi for a 3rd time!

Wisely Benkaci lets him back to his feet where he is dominating the fight, landing a knee to the body and a short uppercut in the clinch.  Benkaci also continues to land that left hook at will and he’s looking extremely confident now, walking down Nuzzi with his hands at his waist before firing again.

The cut on Nuzzi’s face is getting bad now but Benkaci needs to be careful not to gas himself out chasing a finish as he lands yet another big left hook!

Benkaci is keeping the pressure on, cutting off the cage and keeping the fight exactly where he wants it before Benkaci pokes Nuzzi in the eye and we’ll have a brief break in the action.

The doctor is taking a close look at Nuzzi and the doctor stops the fight after Nuzzi says he cannot see out of the poked eye.  Benkaci seems irate at what will likely be a no contest despite a dominant performance.

The bout ends in a no contest after Nuzzi cannot continue competing after an eye poke.