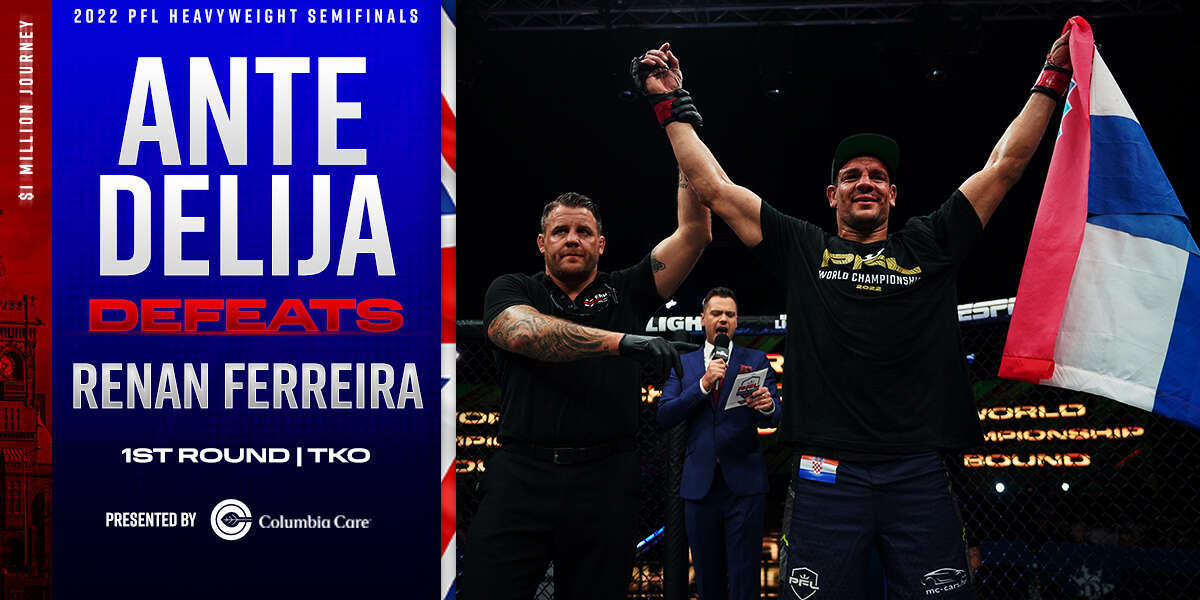 In one of our most anticipated bouts of the night, #2 seed and 2021 Finalist Ante Delija (21-5) looks to advance to his 2nd consecutive PFL Championship. Standing in his way is quite the obstacle in 6’8” Renan “La Problema” Ferreira (9-3).  A Mirko Cro Cop protege, Delija is no stranger to this spot and put on the 2021 PFL Fight of the Year when he met Bruno Cappelozza in the Championship last year, while Ferreira makes his first PFL Playoff appearance. Ferreira holds the two fastest finishes in the history of the PFL Heavyweight division at 25 and 31 seconds respectively and this bout is almost guaranteed to be a beautiful display of calculated violence.

It’s fireworks to start as both men swing big early but neither are able to land flush.  Delija smartly shoots in on a double and drives Ferreira back into the cage and starts looking for some of those judo throws he is able to execute so well.  Delija is however cut already somewhere near his hairline, possibly from a clash of heads.

Ferreira is defending well here but Delija is relentless, eventually lifting the 6’8” behemoth clean off his feet and hitting the outside trip, landing in half guard and quickly transition to side control as Ferreira looks to recover half guard and reguard.  Ferreira is able to reenter the full guard but he just might regret it as Delija postures up and lands some massive shots before diving back in and staying heavy on top.

Again Delija postures up and lands big and Ferreira is going to need to get back to his feet here as he works back towards the cage and tries to build his base.  Delija isn’t giving him an inch however, mixing heavy top pressure with massive ground and pound early on.

Ferreira just might be in trouble here as Delija pours on the damage and Ferreira shells up! The ref warns Ferreira to work as Delija rains down hammerfists and that’ll do it! The ref calls the fight as Delija absolutely smashes Ferreira from the top.