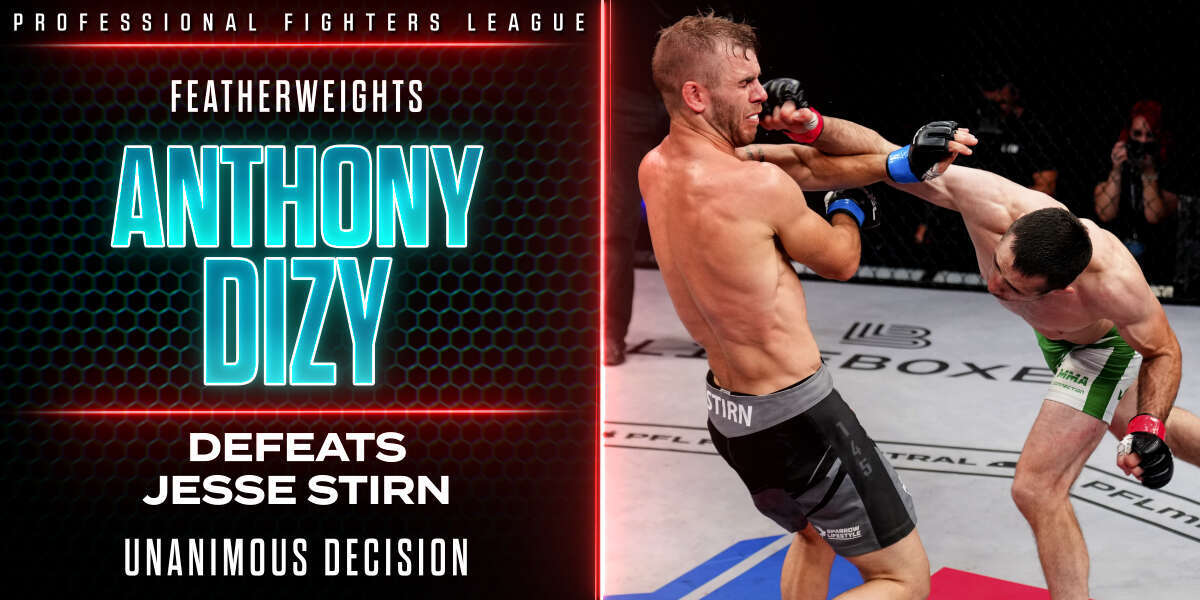 Continuing the action on Friday night’s PFL preliminary card live on ESPN+ was a non-Playoff bout at 145-pounds between France native Anthony Dizy and Baltimore's Jesse Stirn. Both men competed during the 2021 PFL Regular Season.

Dizy (13-4) made his first appearance in the United States since 2014 when he dropped a close decision to semifinalist Chris Wade in his PFL debut. "La Masse" is a well-traveled veteran with fights in promotions across the world like BAMMA, Cage Warriors, and M-1. Throughout his career, Dizy has earned 7 of his 13 wins by way of stoppage.

Stirn (11-5) comes into Friday's bout looking to bounce back from a loss to Sheymon Moraes during the Regular Season. Moraes locked in a brutal kimura at the buzzer to give Stirn the loss. Now, the former CFFC featherweight title challenger, who has never been knocked out, aims to register his first PFL win.

Stirn spent the opening two minutes of the bout circling around the cage, but Dizy remained calm and eventually closed the distance to grab a hold of Stirn and push him against the cage. Dizy was keeping the shoulder pressure on Stirn and using his strength to control position against the cage. Stirn was eventually able to separate, but ate a jab while retreating. Dizy landed a nice uppercut before shooting for another takedown but Stirn was able to sprawl and keep the fight standing. In the final seconds, Dizy closed the distance one more time and pressed Stirn against the cage as time expired.

Right on the button! We go to the 2nd round...#PFLPlayoffs
LIVE NOW ESPN+
🌐 https://t.co/WfOt9XBfzk pic.twitter.com/dlTo8yaZSQ

Dizy began opening up to start the second frame, ducking under an errant punch from Stirn and immediately getting the body lock. Dizy spun to Stirn’s back and began working for his neck. Siren was able to roll to his back, but Dizy kept the top pressure heavy and continued working from inside of his opponent’s guard. Dizy was staying patient and relentless with his pressure. Stirn had a brief moment where he attempted to gain the dominant position, but Dizy quickly regrouped and ended up back on top. Dizy was delivering some ground-and-pound while transitioning into side control and keeping the shoulder pressure on Stirn's head. Stirn used an underhook to work back to his feet. Stirn tried to land some wild punches and a flying knee, before finding a takedown that came just after the bell.

Stirn was the more aggressive fighter at the start of the final round and returned to his pace from the opening moments of the fight. Dizy landed a straight right, but ate two kicks to the body from Stirn for his efforts. Stirn circled around Dizy looking for an opening, until Dizy changed levels and quickly rushed in. Dizy grabbed ahold of Stirn’s leg against the cage. The Frenchman’s relentless pressure continued to be the story of the fight. Stirn was showing off his footwork once the two men separated, but he was unable to put together effective striking or combinations as Dizy refused to give him any openings in the center of the cage. Stirn was showboating in the final moments as we wrapped up Round 3 and went to the judges.

The veteran Dizy showed why he gave No. 2 seed Chris Wade everything he could handle during the Regular Season by consistently pressuring Stirn and controlling where the fight took place. While Stirn was the busier and more active striker, Dizy was disciplined and landing when it counted. Thanks to his heavy top game, Dizy was able to have the three-round affair play out at his pace.