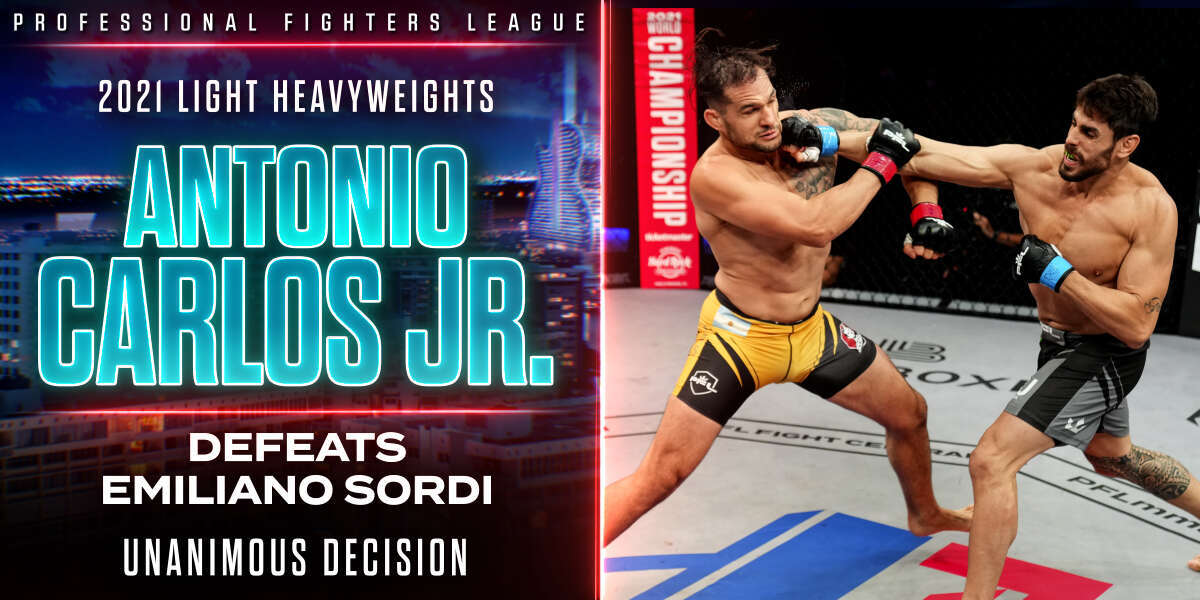 Keeping the action going in the PFL Playoffs was the second semifinal in the light heavyweight division between No. 1 overall seed Antonio Carlos Jr. of Brazil and Argentina's Emiliano Sordi, the 2019 PFL Light Heavyweight World Champion and No. 4 seed entering the 2021 postseason.

The winner will take on Marthin Hamlet for the PFL Light Heavyweight Championship in October.

Sordi (23-8-1) is Argentina's first MMA champion and is the only fighter to finish 5 straight opponents on the way to a PFL title. After winning the PFL title, Sordi returned to his hometown and used some of the $1 million prize money to help distribute food to those impacted by the COVID-19 pandemic. Sordi has earned 22 of his 23 wins by way of stoppage.

Carlos Jr. (11-5, 2 NC) is a UFC veteran and former winner of The Ultimate Fighter. The jiu-jitsu ace known as "Shoeface" has earned 9 of his 11 wins by submission, with six coming in the first round. Carlos Jr. is tied with fellow black belts Rousimar Palhares and Demian Maia for first in UFC middleweight history with 5 submission wins. During the 2021 PFL Regular Season, Carlos Jr. picked up a submission win over Tom Lawlor before a no contest due to an accidental groin strike against Vinny Magalhaes.

After a brief feeling out process, Carlos Jr. landed some heavy leather and cracked Sordi with a solid right hand. Sordi shook off the punch and then stuffed a takedown attempt from Carlos Jr. before landing a right hand of his own. Carlos Jr.closed the distance with some wild punches before grabbing a hold of Sordi and clinching against the cage. Following a cup check, the fighters were separated and Carlos Jr. took a breather. As the action restarted, Sordi connected with an overhand right just above Carlos Jr. left ear and began to put on the pressure. The two men traded stiff jabs, but it was Sordi who was more consistently pushing the pace. Carlos Jr. capped off the round with a spinning back kick to the body.

The two men met in the center of the cage to start Round 2, fainting and looking for an opening. A check right hook from Sordi opened a cut right over the eye of Carlos Jr.. “Shoeface” returned fire with two right hands of his own to open a cut near Sordi’s eye. After exchanging some jabs to the body, Carlos Jr. attempted to change levels for a takedown but was unsuccessful on the single leg. Both men were flinging right hands, until Carlos Jr. finally landed a takedown with 20 seconds left in the round. Carlos Jr. landed some ground-and-pound until Sordi popped back to his feet and the buzzer sounded. Was it enough to steal the round?

We will see the 3rd round!
How have you scored it through two rounds?#PFLPlayoffs
LIVE NOW ESPN2 & ESPN+
🌐 https://t.co/WfOt9XBfzk pic.twitter.com/bE4DHz5xdX

Sordi and Carlos Jr.embraced at the start of the third and final round. Carlos Jr. shot for another takedown nearly 90 seconds into the round, getting the body lock and pushing Sordi into the cage. Carlos Jr. attempted to drag the fight to the mat, but Sordi briefly grabbed onto the fence to stay on his feet. Despite the fence grab, Carlos Jr. kept the bodylock and eventually tripped Sordi to the mat before immediately taking his back. Sordi managed to get back to his feet and broke free of Carlos Jr.’s grip. Carlos Jr. again attempted a takedown that was unsuccessful, but he continued the relentless pursuit and pressure until he was able to get the takedown against the cage with just 40 seconds remaining. Carlos Jr. kept his grip around Sordi’s waist and was able to ride out the position for the remainder of the round to send the fight to the judges.

It was an evenly matched fight in the second light heavyweight final that truly could have gone in either direction. In the end, it was Carlos Jr.’s relentless efforts in the takedown department that earned him the unanimous decision win. The win sets up an intriguing matchup with seven-time Norwegian wrestling champion Marthin Hamlet in what will be a clash of two grappling studs.