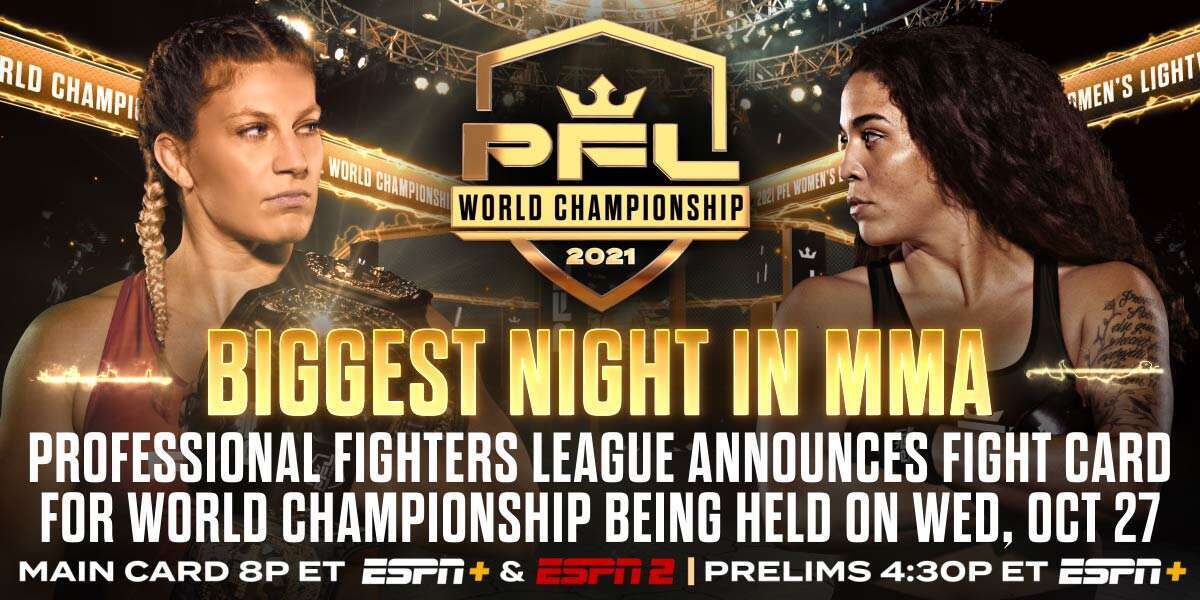 PFL World Championship is Live in Primetime on Wednesday, October 27
on ESPN+ and ESPN Networks

NEW YORK (September 27, 2021) - The Professional Fighters League (PFL), the fastest growing and most innovative sports league, has announced the card for the PFL World Championship on Wednesday, October 27 on ESPN2 and ESPN+. Fighters across all six weight classes look to etch their name in PFL history as world champions and capture the $1 million grand prize.

Two-time Olympic Gold Medalist Claressa Shields will return to the PFL SmartCage after a thrilling MMA debut at PFL 4, 2021 rallying from behind and securing an impressive round 3 TKO victory over Brittney Elkin. Shields, a two-sport combat athlete, looks to continue her winning ways and is set to face Abigail Montes at the PFL World Championship.

“The PFL World Championship on Wednesday, October 27 will showcase the determination and resilience our world class fighters have showcased throughout the season in their quest to become a PFL World Champion,” said PFL CEO Peter Murray. “After what’s already been an incredibly successful season, I cannot wait to crown this year’s six champions.”

In the highly anticipated main event, 2019 PFL Women’s Lightweight World Champion Kayla Harrison looks to continue her undefeated MMA run when she returns to the SmartCage against Taylor Guardado.

Continued action turns to the Heavyweight division, where a highly intriguing clash between Bruno Cappelozza and Ante Delija will take place.

In the Featherweight division, Movlid Khaybulaev - who holds the fastest knockout in PFL history - will match up with Chris Wade. Wade, who exited the PFL Semifinals in both 2018 and 2019, makes his first-ever trip to the PFL World Championship.

The championship action starts in the Lightweight division, with 2019 PFL lightweight runner-up Loik Radzhabov squaring off with Raush Manfio, who holds a record of 3-0 in his PFL debut season.

About Professional Fighters League
Professional Fighters League (PFL) is the first and only global organization to present MMA in the sports-season format where world-class fighters compete in a Regular Season, Playoffs, and Championship. Leveraging its elite talent roster and cutting-edge SmartCage technology to deliver unmatched immersive experiences, the league is experiencing a tremendously successful 2021 which has seen substantial viewership growth on ESPN networks. The 2021 PFL World Championship on Wednesday, October 27 is the biggest night in MMA where the top-two fighters across six weight divisions compete to become a world champion and earn the $1 million title purse. The event airs live on ESPN networks and streaming platforms, as well as on leading broadcast and streaming outlets in 160 countries worldwide.