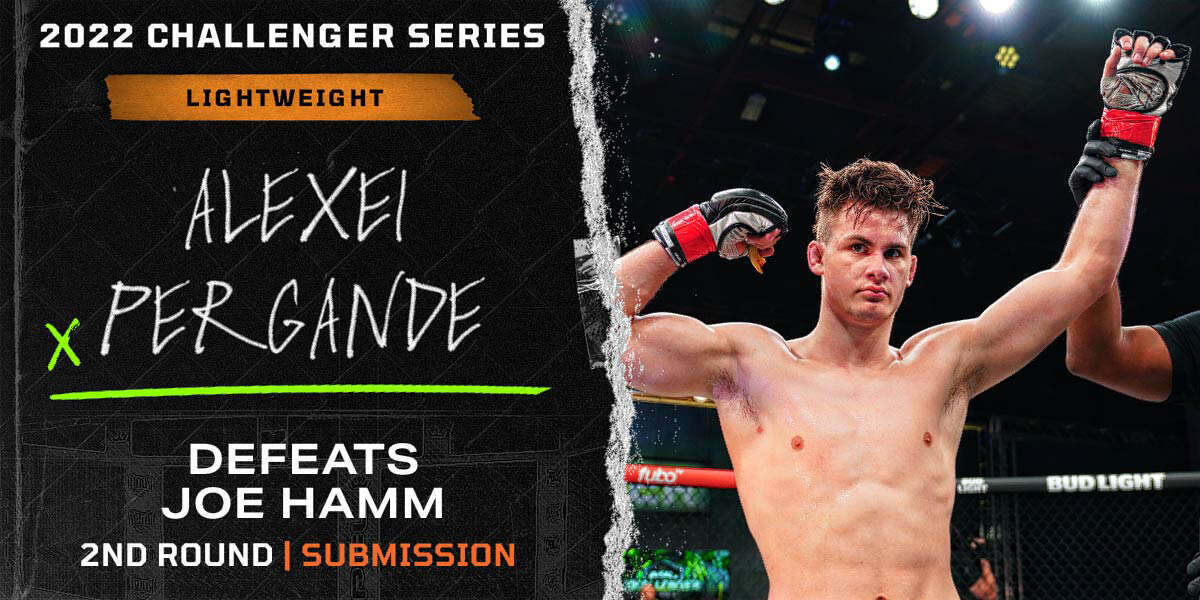 Now this is a high-octane Lightweight matchup.

Alexei Pergande, the 2016 Ringside World Boxing Champion, makes his pro debut after a 4-0 amateur career that saw him finish all four opponents before the third round.

Joe Hamm, a six-time Muay Thai Champion, is equally lethal inside the cage. He went 6-1 as an amateur with four finishes. That lone loss? Split decision. He was that close from going 7-0 as an amateur, but now he has the chance to start a new chapter inside the PFL cage during Week 7 of the 2022 PFL Challenger Series.

Who will take home the victory? Here’s what went down:

No touch of the gloves, just an inside leg kick from Hamm followed by a left hand. Pergande fires back with a piston-like right, but it misses the mark, and Hamm connects with another leg kick for his efforts.

Pergande goes high with the kick this time, and it just misses the mark. Both men, as expected, look incredibly comfortable on the feet. Pergande closes the distance now, and they clinch, moving to the cage.

Hamm lands a knee on the inside, but Pergande’s persistent from this position, securing the takedown and landing in top position. Immediately, he’s looking to pass and ground-and-pound, and that’s exactly what he does, moving to side control and looking for the arm-triangle early.

It’s not there, and Hamm recovers full guard. He’s active off the bottom, and while Pergande is throwing some heat from the top, he’s avoiding most of it with some nice head movement from his back.

Now, Pergande passes to side control and is looking for a D’Arce. This looks tight, ladies and gentlemen.

Hamm escapes! Great work from him staying calm and popping out of that submission attempt.

The round ends there, Pergrande still on top.

Two spinning kicks from Pergande early, followed by a body kick. Hamm’s having none of it, and he throws some missiles down the middle that find their mark. That certainly got Pergande’s attention, but the 20-year-old former boxing champ is undeterred, pressing forward with a quick blitz.

They clinch, and it’s Hamm getting the body-lock takedown this time. He’s immediately in side control, but Pergande scrambles to a turtle position and then reverses, landing back on top. Excellent work there.

After a little activity there, Hamm scrambles back to his feet but Pergande’s all over him, rolling through and landing back on top while simultaneously threatening a leglock. Beautifully done there. Pergande is showing some impressive versatility in his game.

Now, Pergande’s in mount, and he postures for some big ground-and-pound shots. Another arm-triangle attempt from Pergande here, and this one’s much tighter.

It’s there. Hamm’s tapping out. It’s a wrap.

The boxing champion wins … via submission. Just like we all expected.

“I really couldn’t, like, let my hands go tonight,” Pergande told Sean O’Connell after the fight. “... I just felt like I could [get] those head-and-arm chokes, I almost Von Flue’d him. So, you know, I was feeling like he was struggling with those. … He was kind of awkward on the feet. It was hard for me to pick him apart.”