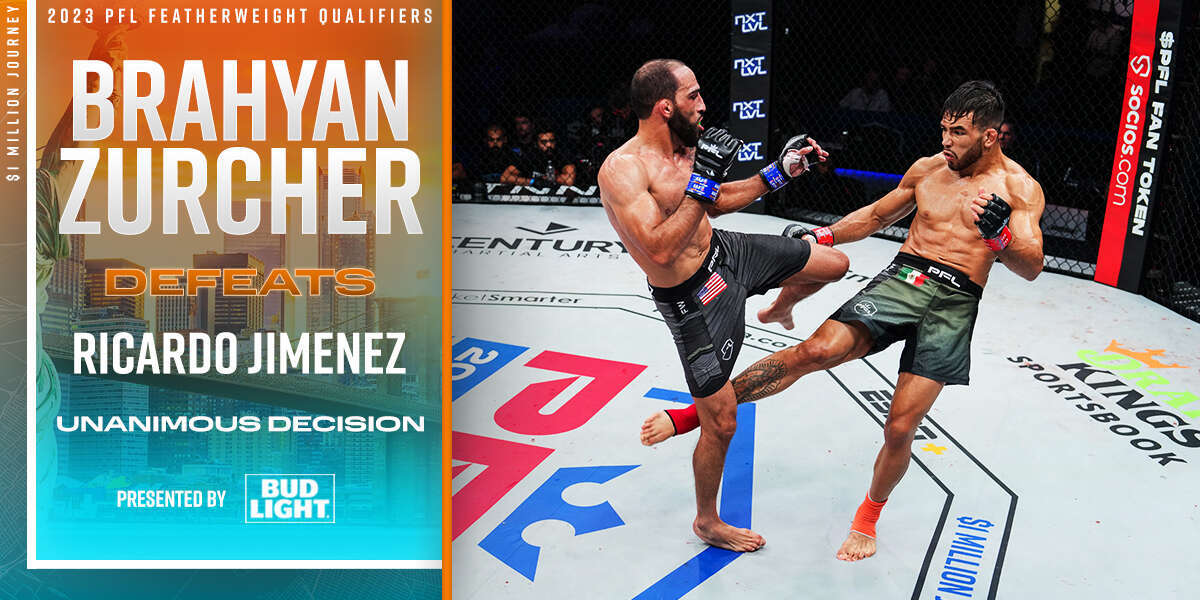 Brahyan Zurcher Earns a Spot on the 2023 PFL Challenger Series

The PFL Challenger Series Qualifiers are officially underway as Brahyan Zurcher (3-0) meets Ricardo Jimenez (0-1-1) with a chance to secure a spot on the 2023 PFL Challenger Series at stake. Zurcher previously appeared on the Challenger Series, upsetting Scottie Stockman in March to pick up his 3rd straight pro win. He now looks to get back there and secure a contract for the 2023 Regular Season. Jimenez, a taekwondo black belt and BJJ brown belt, seeks his first professional win in front of his hometown crowd in New York City.

The fight begins and Jimenez looks to clinch off the bat, grinding Zurcher against the SmartCage for about a minute before Zurcher is able to break and return to the center. Jimenez is able to get the fight to the mat but Zurcher quickly reverses position to wind up on top in the closed guard of Jimenez.

Zurcher seems content to focus on position briefly before disengaging and getting back to the feet, but Jimenez is keeping the pressure on and won’t break the clinch as he again looks for the takedown.

Jimenez is landing some nice knees to the body with his back pressed against the SmartCage as the fighters both reverse position and circle off before Zurcher gets the fight to the ground with control of Jimenez’s back.

Zurcher briefly attacks the kimura but can’t do anything with it as they’re back to their feet again, the grappling pace in this fight is absolutely grueling so far.

Jimenez changes levels again and he’s in deep on a single leg as the round winds down. As the 10 second clapper hits, Jimenez lands a big flurry, forcing Zurcher to back off before engaging the clinch to end the round.

Zurcher opens the 2nd with a big high kick that Jimenez is able to block before circling off and returning with a high kick of his own. They clinch again and Jimenez lands a hip toss and winds up in top half guard, but only briefly as Zurcher works his way back to the feet.

They clinch for a moment before Zurcher breaks and both fighters appear to be tiring a bit. They once again clinch and Zurcher hits a beautiful inside trip and lands in heavy top half guard. Jimenez is looking to shrimp out to a hip but Zurcher sees it and stays heavy on top.

Zurcher is slowly moving to the back as Jimenez works towards the cage to try to build up his base. Zurcher briefly looks to trap the arm in a crucifix position before abandoning it and continuing to attack the back. Jimenez briefly gets back to his feet just to get dragged right back down as Zurcher unloads the ground and pound.

Zurcher seems to have an answer for everything in this round as Jimenez struggles to work back to his feet, eventually getting his feet on Zurcher’s hip and creating a little bit of space. Zurcher postures up but dives right back in, snatching the back of Jimenez in the ensuing scramble.

Instantly Zurcher is attacking the RNC but he’s a little high on the back to finish, though he’s coming quite close!

With 30 seconds to go, Jimenez is in survival mode trying to make it out of the round with a dangerous opponent on his back. He’s able to weather the storm and we’ll see a 3rd!

Our final round is underway as the fighters exchange low kicks in the center of the SmartCage. Jimenez rushes in and gets clipped with a left hand but quickly recovers.  Both fighters are looking for a knockout blow as Jimenez just misses on a high kick and Zurcher lands a big overhand left before taking the fight to the mat.

Zurcher is in top side control landing some nice grounded knees to the body, a very underutilized technique in MMA. He’s staying heavy on top and peppering knees as he’s able to take the back once again and start dropping big shots.

Jimenez is holding Zurcher’s wrist and briefly creates a scramble but Zurcher is right back on top of him a moment later, now landing some shoulder strikes from top half guard, very crafty!

Zurcher is doing a fantastic job working to maintain a dominant position and mixing in damage along the way. With a minute remaining in the fight, Zurcher is landing big shots from the top before getting the hooks in and taking the back once again.

Once again Zurcher is attacking the RNC but Jimenez does a good job to fight the hands and prevent the finish. Zurcher postures up as the 10 second clapper hits and gets off a few more big shots for the road.

Brahyan Zurcher picks up the unanimous decision win and earns a spot in the 2023 PFL Challenger Series.#PFLPlayoffs LIVE on ESPN+
🌎 https://t.co/jPNvomkWj8 pic.twitter.com/XrXpXvHkaV

Brahyan Zurcher secures a spot on the 2023 PFL Challenger Series with a dominant decision victory!