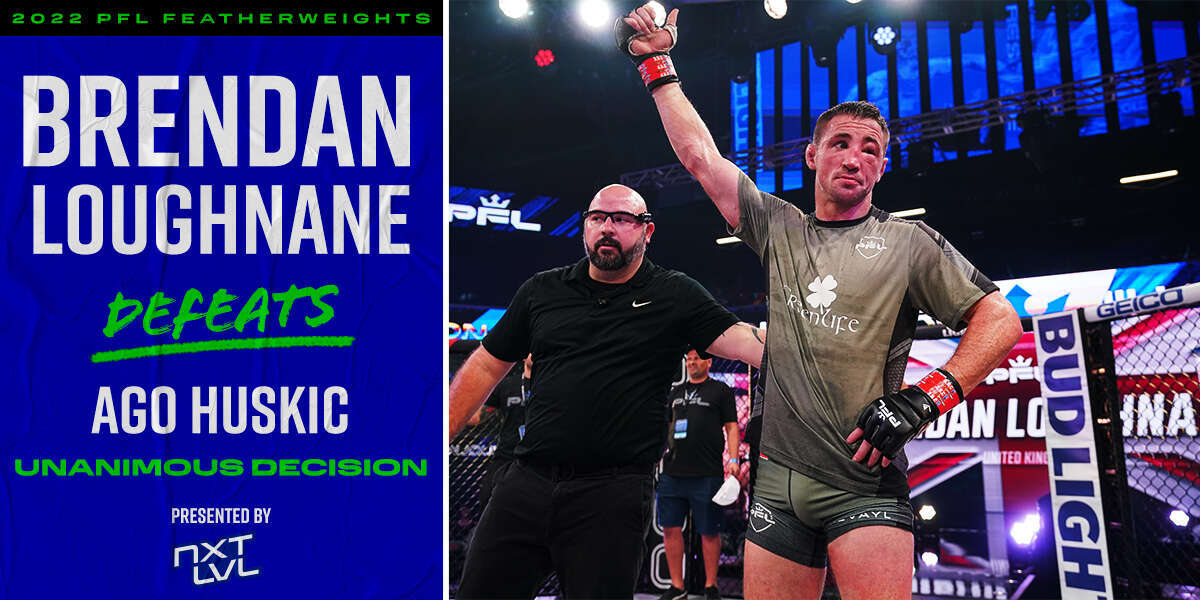 Opening the PFL 5 ESPN+ Card,  2021 Semifinalist and fan favorite Brendan Loughnane (22-4) looks to secure his spot in the PFL Playoffs against newcomer Ago “The Bosnian Dragon” Huskic (8-4). Facing a win or go home scenario, Loughnane will need a win tonight to cement his spot in a wide open Featherweight field and ensure he gets to fight in front of his hometown faithful in the UK in August.

Loughnane opened the season with some adversity, dropping the first round of his first bout with Ryoji Kudo after being knocked down for the first time in his MMA career.  Loughnane was able to rally for a come from behind victory by technical decision.  This time around, he’s sure to be hunting a finish to lock up his playoff spot as well as seeding.  Always proud of his country, Loughnane opens the card so that his countrymen in the UK can see him at 10:30 pm local time.

A PFL newcomer, Huskic, a striker by trade, fled his home country of Bosnia with his family as a child to escape war.  Huskic has stopped 6 of his 8 career wins and describes himself as “a machine that will march you down and keep throwing till the bell rings”.

The bell rings and PFL 5 is officially underway!  Loughnane takes control of the center of the SmartCage early as the fighters both attempt to feel each other out and find the range.  Both men switch stances and exchange leg kicks early.

Huskic is content to strike first but isn’t able to connect cleanly as Loughnane attempts to find his timing.  Loughnane catches 2 body kicks but doesn’t generate any offense or counters.  After 90 seconds Loughnane changes levels and secures double underhooks, driving Huskic back into the SmartCage.

Huskic is able to pummel for an underhook of his own and reverse position as the fighters trade short blows in the clinch. Huskic lands a big right hand on the break that is the most significant land for either fighter so far.

Loughnane is now looking for the counter right but he seems a bit tepid after being dropped for the first time in his last fight.  Excellent footwork from Loughnane as he stays out of danger and retakes the center before slipping a right from Huskic and landing one of his own.

There is some damage showing on the left eye of Loughnane and it appears to be swelling shut, something to watch as this fight progresses.  Huskic is leading the dance so far and is outlanding Loughnane by a decent margin.

As the round winds down Loughnane’s eye is clearly going to be an issue for him, but with 30 seconds to go Brendan lands a big combination that gets the attention of Huskic.  Huskic chases Loughnane down and the round ends with Loughnane gaining a little momentum but wearing a lot of damage on that eye.

Loughnane’s eye is swollen shut but the fight will continue. After opening as a -1100 favorite, the live odds now reflect Loughnane as only -285.

Brendan opens this round a bit more aggressively, perhaps knowing that the eye is going to be a problem as he lands a big left to get us started.  Loughnane again catches a kick and attempts to get the fight to the ground but Huskic is able to fight off the takedown attempt.

The fighters clinch and jockey for position and Loughnane lands a gorgeous spinning back kick to the body on the break.  Loughnane is fighting much more aggressively in this round and is showing a sense of urgency.

Loughnane lands a big counter left that Huskic responds to before finally securing the takedown and getting the fight to the gorund halfway through the round, landing in in the closed guard of Huskic and starting to get off some short ground and pound shots.

Huskic attempts to throw up the rubber guard, perhaps angling for a triangle choke and using open palm strikes on the busted eye of Loughnane.

Loughnane breaks the rubber guard, postures up, and gets off some good damage with a minute remaining in the round.

Interestingly Loughnane decides to disengage, Huskic attempts to roll for a leg but nothing doing.  As the 10 second clapper hits, Loughnane attempts another takedown but is unable to secure it before the end of the round.

We head to round 3 with the fight very likely tied 1 round apiece.

The final round is underway and once again Loughnane takes the center of the SmartCage and lands BIG, wobbling Huskic to begin the round.  Very strangely, Huskic slips but the referee decides to issue a protected stand up.

Loughnane is switching stances constantly and getting his jab off now as Huskic appears to be fading a bit in our final round.  Loughnane lands a nice right hook on the entry  before slipping a strike, changing levels, and securing his 2nd takedown of the fight.

The corner of Loughnane very clearly wants him to finish as he gets off some ground and pound from top side control.  Loughnane looks to pass the knee over the belly for mount but Huskic is able to fight him off and prevent the pass for now.

With 2 minutes remaining, Loughnane  works the body before eventually disengaging and landing a nice 1-2 on the stand up.  Again Loughnane slips a right hand directly into a takedown and top side control.  Loughnane once again is looking to pass to mount, but before he can Loughnane lands a low blow and the referee pauses the action.

After a brief pause and loss of the position, the fighters are ready to go for a final minute. Loughnane quickly secures a bodylock and starts attempting a takedown. Huskic forces a break and tries to make it a brawl to end the fight before once again being taken to the mat and battered to end the fight.

Brendan Loughnane moves into 1st place in the Featherweight standings, weathering some early adversity and a busted eye to lock up another decision victory.