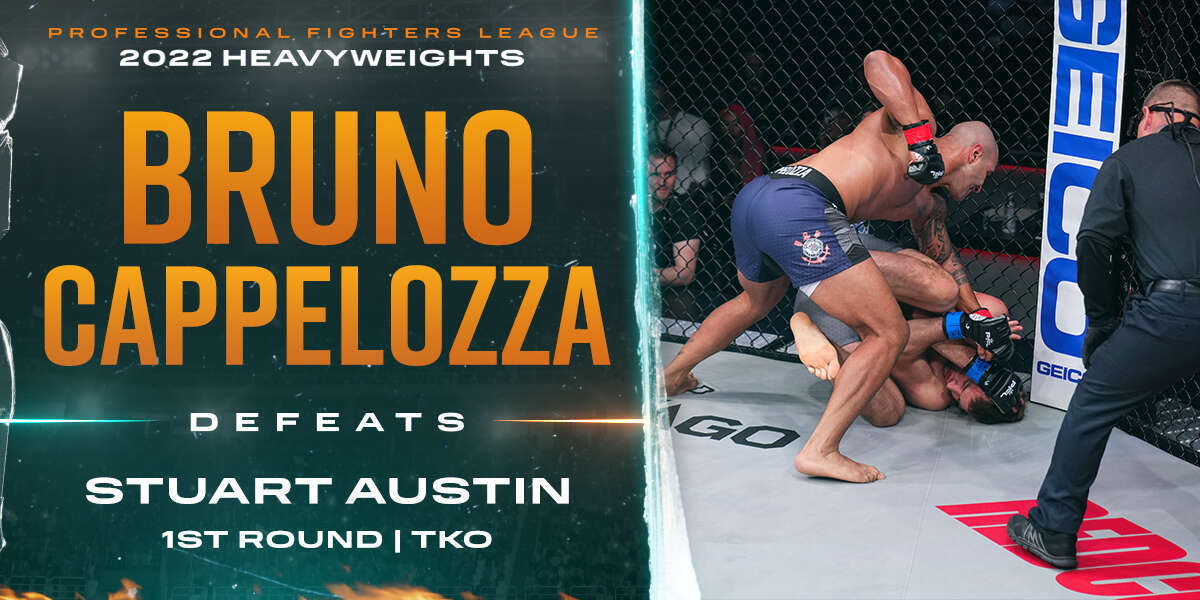 In the main event of the evening, reigning heavyweight champion Bruno Cappelozza (14-5) returns to the Smartcage against Stuart Austin (15-7).  This will be Bruno’s first fight since losing his father during fight week of last year’s championship, when his team decided not to tell him about his father’s passing until after the fight, a choice Bruno upholds was correct. That title fight against Ante Delija was widely regarded as one of the best fights of 2021 in any promotion, and Bruno enters this season looking to become the 3rd PFL champ to repeat.

Stuart Austin didn’t exactly have the perfect first impression with PFL, getting knocked out in 31 seconds in a showcase bout with Renan Ferreira.  Austin upholds that this was a learning experience for him, and he now enters the PFL regular season for the first time feeling like he has something to prove.  With 12 of his 15 wins coming by stoppage, Austin is out to show he deserves the respect of the PFL heavyweight division.

Keith Peterson confirms both fighters are ready and we are off.  Bruno takes the center of the Smartcage and is moving a lot early.  Very twitchy, lots of feints, making Austin react instead of act.

Austin tries to time Cappelozza up but can’t quite figure him out. Bruno closes the distance and gets a bodylock and starts jockeying for position.  Bruno gets the takedown but Austin is able to quickly work back to his feet without taking much damage.

Bruno lands a big left hook as Austin dives for a single leg and for a brief moment it looked like Bruno might just unload and end it, but Austin is able to tuck his head between Bruno’s legs and keep from getting hit.

We’re about halfway through the round now and Austin is able to get back to his feet.  Bruno is doing a great job keeping the pressure on and controlling distance and just like that Bruno lands BIG and sends Austin tumbling to the mat.  Bruno follows him down and throws a few strikes but Austin is able to recover and lock up Bruno’s leg to keep half guard and prevent big damage.

After a brief scramble, Austin loses the leg and Bruno is able to slide his knee across to get the full mount.  Bruno postures up, starts raining down punches, and Keith Peterson calls the fight! Perhaps a little premature, but with 40 seconds to go and caught in the mount, that likely wasn’t getting any better for Austin from there.

6 Points and the 1st round finish for Bruno Cappelozza!#2022PFL2 pic.twitter.com/HcBajmTR8W

Bruno Cappelozza extends his winning streak to 5 fights with a dominant 1st round TKO. He earns 6 points and now sits in 2nd place in the standings behind Renan Ferreira who owns the tiebreaker on time of finish.