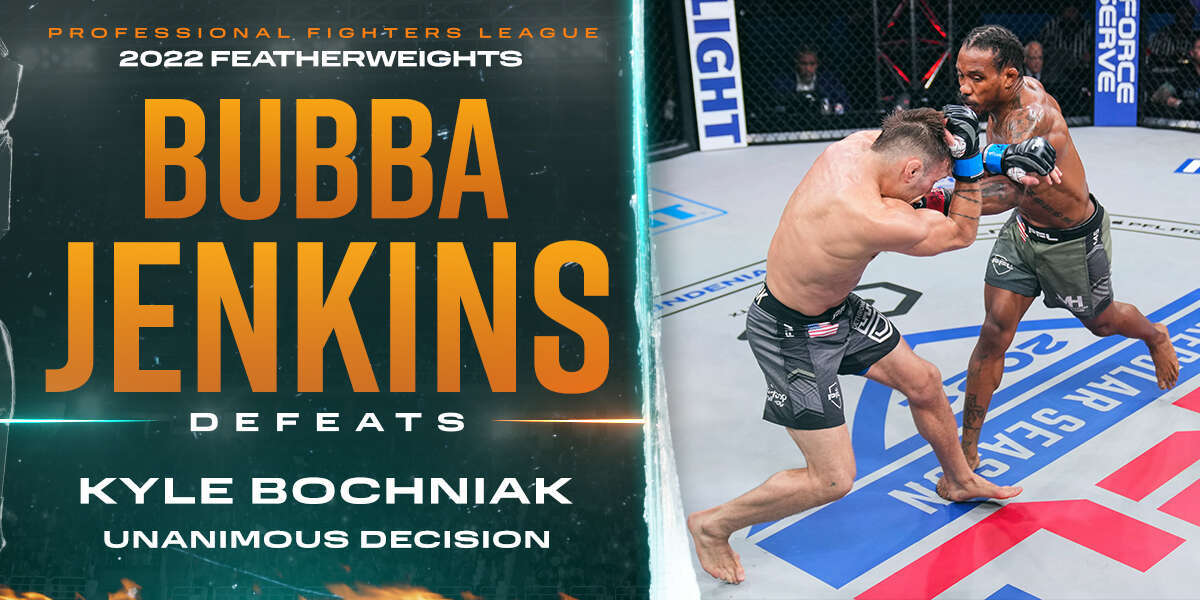 In what is sure to be a fight of the night candidate, 2021 semifinalist Bubba Jenkins (16-5) meets fan favorite and PFL debutant Kyle Bochniak (11-5) in a featherweight tilt.  Jenkins, a former D1 NCAA wrestler and BRAVE featherweight champion looks to get back to his winning ways after having his 5-fight win streak snapped by Chris Wade in last years semifinals. “The Bad Man” has yet to lose a regular season PFL bout.

A UFC veteran, Bochniak had a tough run with the promotion following a 2018 loss to Zabit Magomedsharipov that earned him a nomination for fight of the year.  Recently, Bochniak has been able to find success in the cage once again and he comes into his PFL debut riding a 3-fight win streak.  Despite getting this fight on late notice after Jo Sungbin was forced to withdraw, “Crash” Bochniak prides himself on delivering exciting fights for fans and is as game an opponent as they come.

The fight begins with both men rushing the center of the cage and Bubba throwing a low kick that clips Bochniak’s cup.  After a brief pause, we’re back at it.

A minute in, Bubba looks much more comfortable than he did last season and while he’s not getting off anything crazy, he’s preventing Bochniak from getting any offense off and smartly attacking Bochniak’s leg to hinder his movement early.

Just under 2 minutes in, Bubba strikes into a level change and runs right through Bochniak, getting the fight to the mat and starting to open up with strikes.  Bochniak works back to the feet only to be hit with a belly to back suplex.

Bubba slickly takes the back and steps over the leg to get heavy on top and keep Bochniak down and up against the cage, but Bochniak plays it perfectly and is able to slowly but surely work back to his feet.

They reset and reengage in the center of the cage and Bochniak starts throwing.  With 90 seconds left, Bubba lands flush and knock Bochniak to the mat but before Bubba can follow him there Bochniak is back to his feet and pressuring.

Bochniak throws a lead hook to right high kick combo that almost catches Bubba but Bubba shrugs it off.  As soon as he hears the 10 second clapper, Bubba shoots and gets his 3rd takedown of the round.

10-9 Bubba.  He looks much more comfortable and composed in the Smartcage than we have seen in the past.

Round 2 is underway and Bubba still look calm, cool, and collected.  Bubba feints a level change and comes over the top with a big left hand that connects.  He keeps the pressure on and gets in on a double, eventually settling for an underhook in the clinch.

Bubba starts throwing knees and catches Bochniak low a minute into the round.  Keith Peterson separates the fighters and gives Bochniak time to recover.  Bochniak comes back gunning with a high kick but he’s unable to land.

Both men probe with the jab and Bochniak almost lands a big front kick.  Bochniak does appear to be picking up a little bit of steam in this 2nd round but he’s still having trouble landing on Bubba who appears to be the faster fighter.

With 2 minutes remaining Bubba lands a big straight that stings Bochniak but he’s still hanging out in the pocket and looking for his openings.  Bochniak lands a nice hook and follows with a nice leg kick and body kick.

Oh my! With 45 second remaining Bubba lands a counter right hook that stuns Bochniak and drops him again.  Bubba senses the moment and swarms with punches and knees but Bochniak is able to recover.

Bochniak ends the round with a nice 3-4 hook combo but likely cost himself a much closer round with the knockdown.

The biggest takeaway so far is the improvement in Bubba’s striking and the poise he’s showing so far.

Bubba wastes no time getting right back to his jab and a heavy body kick, but Bochniak simply won’t go away.  He’s still walking forward and throwing even if he’s having a little bit of trouble finding the target.

A minute in, Bochniak lands a nice 2 punch combo that appears to stun Bubba for a moment.  Bubba responds with a level change and a shot, he can’t finish the takedown but he’s able to work an underhook into cage control and after a few seconds of grinding for position, Bubba hits a little peel off takedown and lands in Bochniak’s guard.

Bochniak throws up a triangle, but Bubba is wise to it, he postures up and is able to pass too half guard out of danger.  Bubba attacks a d’arce choke but cannot finish and Bochniak is able to get back to his feet.

Bubba’s right eye is now swollen almost completely shut and Bochniak appears to know this is his chance and he turns up the aggression.

Bochniak is fighting like a man who knows he needs a finish and Bubba seems happy to oblige despite his compromised vision as they stand and trade as the round winds down.

With 30 seconds left Bubba lands 2 big lefts that temporarily put a halt to Bochniak’s pressure.  Both men continue to throw until the fight ends, a likely 29-28 for Bubba.

The streak of Kyle Bochniak never competing in a boring fight stays alive and Bubba begins a new win streak following his loss to Chris Wade in the 2021 PFL Semifinals. Great fight.

Bubba Jenkins gets back to his winning ways and picks up 3 points. It’s getting crowded up top in those featherweight standings with 3 fighters tied with 3 points apiece.