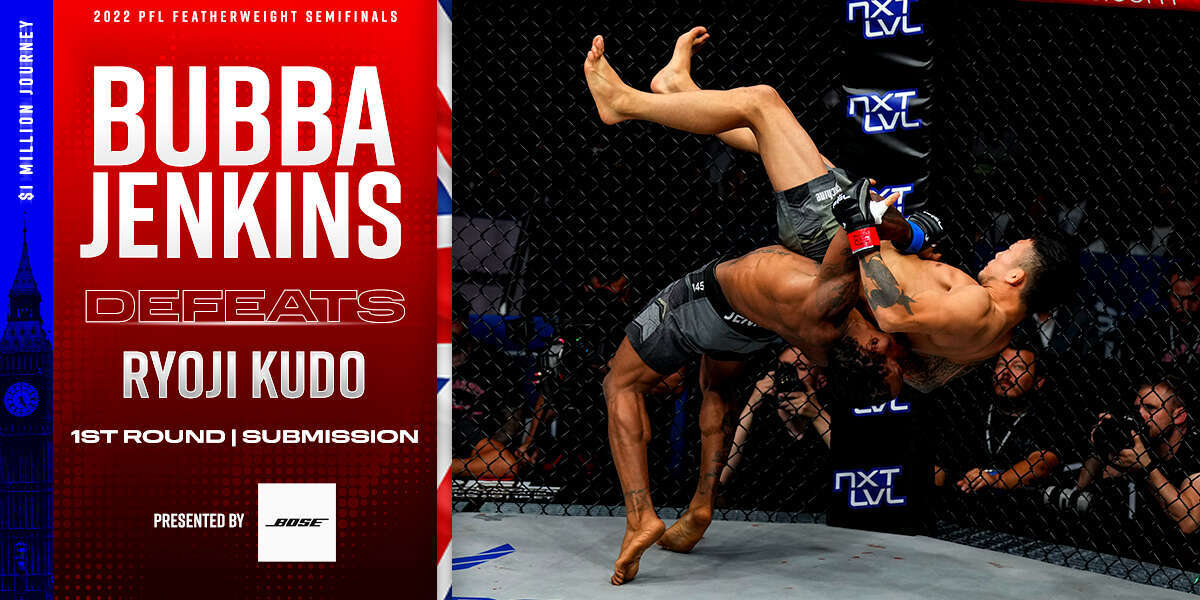 The PFL Featherweight Playoffs are officially underway as #2 seed Ryoji Kudo (11-3-1) takes on 2021 PFL Semifinalist and #3 seed Bubba Jenkins (18-5).  Despite losing his first bout of the season to Brendan Loughnane, Kudo secured the #2 seed with an incredible 1 punch knockout over Alejandro Flores in the 1st round. Jenkins, meanwhile, won both of his regular season bouts by unanimous decision, showcasing some highly improved striking in the process. Two lifelong martial artists, Kudo began training karate at age 5 while Jenkins began wrestling as a child, eventually becoming an NCAA champion wrestler at 157 lbs in a run that included a win over Olympic gold medalist Jordan Burroughs.  Jenkins is seeking a rematch with Chris Wade who eliminated him from last year's PFL Playoffs in the Semifinals.

Bubba opens with early pressure, throwing and partially landing a high kick before shooting in deep on a double and landing a monster suplex on Kudo! Kudo gets back to his feet only to take another ride on Air Jenkins as Jenkins lands another big German suplex.

Kudo again works back to his feet and this time is able to reverse position, grinding Jenkins into the SmartCage as he tries to slow the pace down and work towards a position he can strike from.

OH! Bubba hits a whizzer throw and instantly takes the back in the ensuing scramble, securing the rear naked choke in mid-air and finishing it with a strong squeeze as soon as the fighters hit the mat!

Bubba Jenkins makes a statement to advance to the PFL Featherweight Championship!