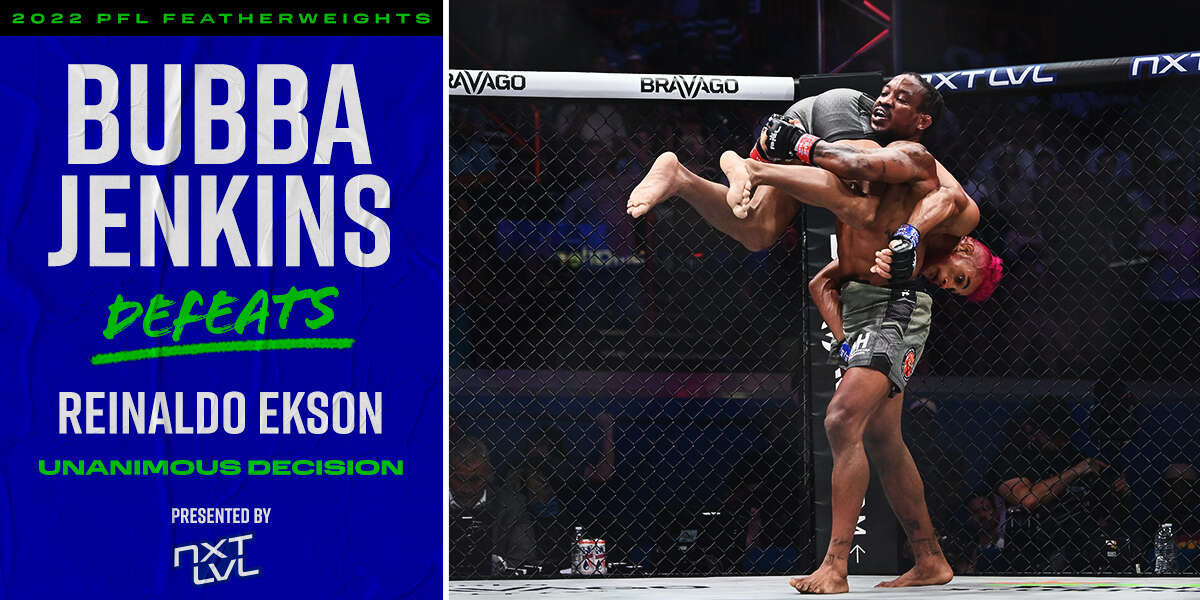 Coming off a successful 1st PFL campaign that saw him make the 2021 Playoffs and a dominant victory in his 1st regular season bout of this year, Bubba Jenkins (17-5) looks to clinch a playoff spot for the 2nd year in a row as he steps in the SmartCage with PFL newcomer Reinaldo Ekson (18-5).

A former BRAVE FC champion and NCAA champion wrestler, Jenkins is proud of his Ghanian roots and shows it in and out of the cage.  Jenkins looks to build on last year’s campaign by getting into the playoffs and past the semifinals, and after a thrilling win over UFC vet Kyle Bochniak in his first bout of the year where he showed some much improved striking.  Jenkins hopes a more well-rounded game can get him over the hump this season and will clinch a playoff spot with any victory.

No slouch in his own right, Ekson fell in love with MMA after watching PRIDE FC cards on DVD, a story many fans can certainly relate to. Ekson carries a 4 fight win streak into this bout and can still insert himself into the playoff picture with a 1st round finish. Ekson won a decision on the Challenger Series in March and seeks to prove he belongs in the regular and postseason.

The bout begins with Eckson firing a low kick followed by a big body roundhouse and the underdog has Bubba on his heels early!

Bubba quickly recovers and gets in deep on single against the fence but Eckson is fighting him off well.  Bubba transitions to a double, clasps his hands under Eckson’s hips and lifts him up and plants him on the mat beautifully, and now this fight is exactly where the bad man wants it.

Bubba briefly takes the back but Eckson uses the opening to get back to his feet and shake him off before Bubba recovers position, retakes the back, and lands another nice takedown.

Bubba is wearing on Eckson early, making him carry all of his weight as he throws some heavy knees at Eckson’s thigh and uses his outside leg to get the hook in and prevent Eckson from working back to his feet.

Eckson is again able to get himself back to the feet but he can’t shake Bubba who again attacks the single leg.  Eckson is able to force a break but not before eating a big left hand on the disengage for his trouble.

Now Bubba is starting to let the strikes go with a nice front kick and right cross as Eckson fires back with a big right hand of his own.

With a minute remaining Eckson’s playoff hopes are slipping away second by second as Bubba keeps the pressure on and lands a nice roundhouse kick to the body.

They feel each other out as Bubba lands a heavy leg kick and both fighters land some big blows in a wild exchange to close out the round.  The improvement in Bubba’s striking from last season is readily apparent.

They touch gloves and our 2nd round is underway.  The fighters trade kicks before Bubba is back in familiar territory, deep on a single leg and dragging Eckson down to the mat but Eckson quickly pops back up and whiffs on a big right hand.

Eckson closes distance and lands a right hand and Bubba loads up on a big right that misses, allowing Eckson to engage in the clinch and drive Bubba back into the fence briefly before deciding he would rather fight at kickboxing range.

Eckson lands another nice right and Bubba is expending a ton of energy on these takedown attempts as he is now in on a double leg. Bubba lifts Eckson clean off the ground and slams him to the mat, landing in top half guard and taking a moment to regroup and possibly catch his breath.

With 2 minutes to work, Bubba is staying heavy on top but not getting off a ton of offense.  Now Bubba starts to get off some hammerfists and short ground hooks as Eckson tries to get his back to the fence.

Eckson attacks a kimura, likely looking to create a scramble and use it to sweep or get to his feet but Bubba seems unbothered, landing some nice grounded knees to the body of Eckson as the round winds down.

With 15 seconds to go Bubba postures up and gets off some strikes before briefly attacking and losing the choke.

Eckson will likely need a finish to win at this point.

Eckson is taking some big deep breaths as we begin our final round and Bubba comes out swinging, landing a heavy jab and just missing with a big cross behind it.

Bubba has ballooned to a -1600 favorite on the live line, further reinforcing that Eckson will need a finish here.  Bubba attempts a high kick that lands on the guard of Eckson but gives him something to think about.

At this point Eckson seems a bit timid because of the wrestling threat of Bubba as Bubba throws a low kick that lands below the belt and the ref pauses the action.

After a brief break they’re back at it and Bubba misses on a small combo before landing another nice body kick, one of his most effective strikes of the fight throughout.

Bubba lands a nice check hook that gets Eckson moving backwards before Bubba uses a front kick and a right hand to change levels and drive through to finish the takedown halfway through the round.

With 90 seconds to go we’re in a familiar position once again with Bubba on top in Eckson’s closed guard.  One would like to see some more urgency from Eckson here but he is very accepting of bad position and Bubba seems perfectly content to ride out the position for a decision win which would clinch his playoff spot.

Bubba postures up with 10 seconds left and lands some short spots to secure a dominant decision victory once again.

Bubba Jenkins clinches his 2nd straight trip to the PFL Playoffs with a dominant decision.