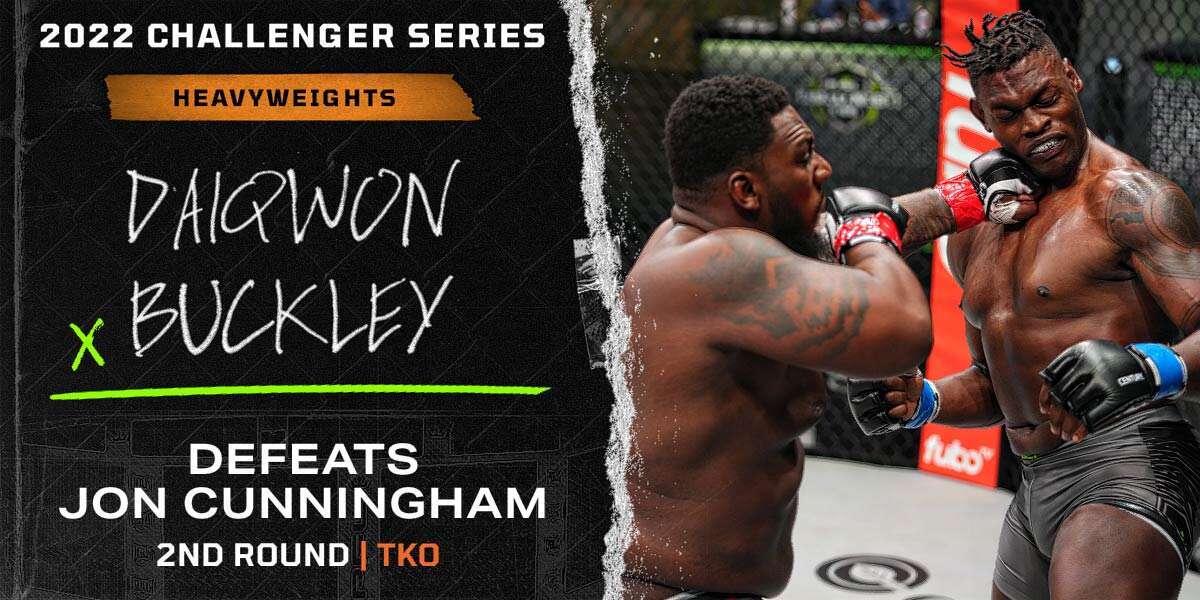 Buckley cranks the volume, beats down Cunningham in Round 2

I mean, do I really need to say anything else? The big boys take center stage Friday night for Week 6 of the 2022 PFL Challenger Series –– and fight fans know what that means.

First up is a bout between two 1-0 professionals, as Daiqwon Buckley and Jon Cunningham. Let’s have some fun.

Cunningham paws a jab early, then blitzes and ends with a front kick. A heavy 1-2 misses from Cunningham, and Buckley clinches.

Maybe not the move. Cunningham’s happy to be here, and he tosses Buckley to the canvas, transitioning instantly to mount. Some ground-and-pound here, but Buckley bumps and sweeps.

That was gorgeous. Cunningham scrambles, and Buckley takes the back, but Cunningham simply … stands up. Jiu-jitsu doesn’t work when you can squat a Mack, apparently.

Halfway through the round, and they’re clinching against the cage. Cunningham looks absolutely gassed, and Buckley is landing hard shots, wobbling his opponent every time. Just as it appears Cunningham is on the brink of going down, though, he survives and fires back. What a slugfest.

One minute left, and Buckley lands another crispy right hand. He tags Cunningham with four more hard shots, but Cunningham is still here. No idea how he’s staying upright at this point, but he is, and he survives to see Round 2.

Cunningham looks fresher here to start Round 2, firing off a series of hard kicks. Surprisingly, Cunningham looks for the trip and Buckley takes advantage of it, getting the takedown of his own and immediately landing in mount. Less than one minute into the round, and this is not where Cunningham wants to be.

Buckley threatens the Americana, and Cunningham squirms and scrambles, giving up his back in the process. This is soon to be a wrap. Buckley’s raining down punches, and Cunningham has no answer. The referee is taking a close look … and it’s over.