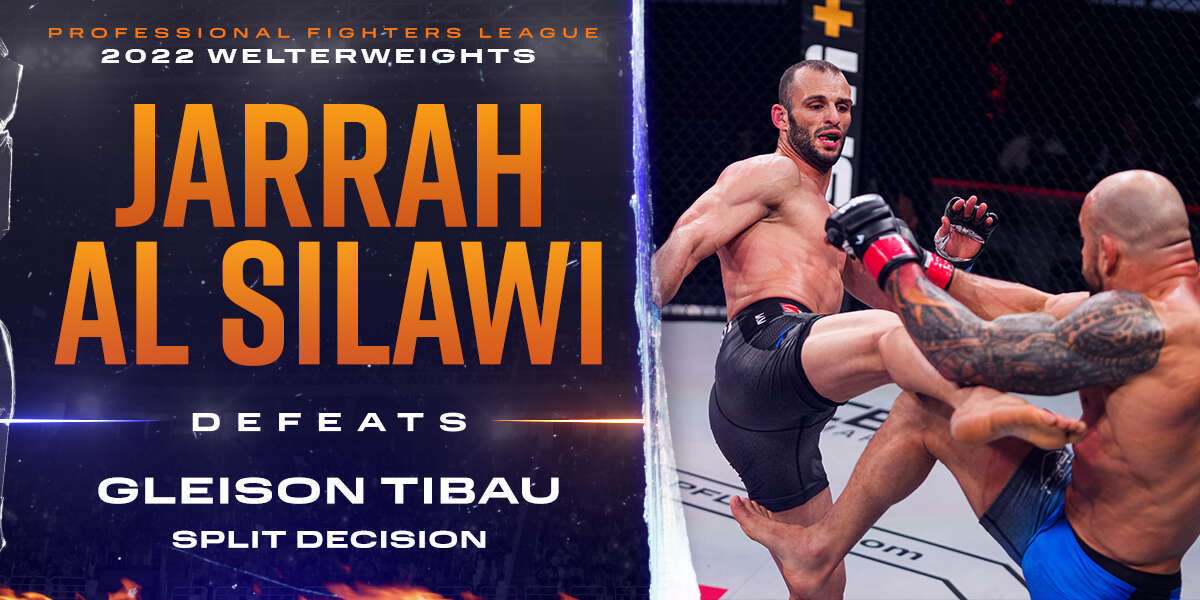 In his much anticipated PFL debut, Challenger Series contract winner Jarrah Al Silawi (17-3) takes on the league’s most experienced fighter in Gleison Tibau (37-15).

Tibau made his professional debut in 1999 and is still going strong 52 fights later. The veteran Tibau, a jiu jitsu specialist, trains at American Top Team in Florida and recently earned American citizenship.  Tibau carries a 2 fight win streak into this matchup, although many fans and media alike will tell you that his split decision over Rory MacDonald last season was perhaps the wrong decision.

Across the Smartcage stands Jarrah Al Silawi, who won his PFL contract on Challenger Series in February with a monster flying knee.  A former BRAVE FC champion, Al Silawi is eager to prove he belongs at this level and plans to come out on top in this classic grappler v. striker tilt.

The fighters touch globes and we are off.  Both fighters feeling each other out early and you can tell that Al Silawi, a fantastic striker, respects the grappling of Tibau and is not planning on putting himself in a position to be taking down.

Al Silawi is framing off with the lead hand and firing some kicks to find range, and about a minute and 20 seconds into the fight Tibau attempts a takedown which Al Silawi expertly fights off.  With both men against the cage, Al Silawi is able to frame up for a big knee up high that makes Tibau think twice and abandon the clinch.

Al Silawi appears to be finding the range now, landing a nice high kick and looking for the right hand behind it.

Tibau shoots again halfway through the round and Al Silawi seems to plan on using the whizzer and framing off on Tibau’s face with his elbow to fight off the takedowns.  Tibau keeps the pressure on and drops for a double, but Al Silawi is able to snatch an underhook and reverse position, circling back to the center of the cage where he seems to have the clear advantage.

Al Silawi lands a heavy leg kick followed by a big body shot and it’s clear he came into this fight with a great gameplan that he is so far executing.

Tibau walks him down but Al Silawi seems very aware of where the cage is and doesn’t let Tibau cut him off.

Neither fighter did a tremendous amount of damage, but Al Silawi is clearly winning the striking exchanges and fighting off the takedowns beautifully as the round comes to a close.

Tibau begins the round coming forward and Al Silawi lands a big right over the top, though Tibau is seemingly unfazed and continues moving forward.

Al Silawi is really starting to find the range with that right cross and lands a big knee to the body for good measure.

A minute in and Tibau shoots again and gets in deep on a single, but again Al Silawi is able to perfectly defend for about 20 seconds before Tibau is finally able to take his legs out from under him and get the fight to the mat.

Tibau has the left leg trapped in a triangle to prevent Al Silawi from getting back to his feet as Al Silawi looks to scramble and use the cage to get up.

Tibau staying heavy on top but at about 2:20 Al Silawi is able to use the whizzer to get back to his feet.  Notably, Tibau didn’t do much damage with the top position while he had it.

As the fighters jockey along the cage, Al Silawi looks to break position and is eventually able to torque under the left arm of Tibau and break and we’re back to the center.

Tibau lands a nice left hand, probably his most significant strike of the fight so far and it appears Al Silawi may be starting to slow down after those grueling grappling exchanges.

Both men seem content to take a little breather as Al Silawi lands a nice body kick followed by that signature knee but Tibau answers with a big overhand right that seems to damage Al Silawi.

The round ends with Tibau pressing Al Silawi into the cage in what was definitely a much stronger round for Tibau.

Likely a round a piece, the winner of this round should determine the fight.

Al Silawi again comes out with that right high kick but Tibau is able to shrug him off fairly easily.

Tibau changes levels a bit lazily and Al Silawi is able to just step out of the way.  Al Silawi goes back to the low kick as Sean O’Connell notes it may be a little late in the fight to pursue that strategy.

Again Al Silawi lands that body kick and one would have to imagine those body shots are wearing on Tibau as the fight goes on. Al Silawi lands a clean uppercut but doesn’t follow it up as Tibau fires a big overhand that Al Silawi easily slips.

Al Silawi gets a bit comfortable and Tibau explodes for a blast double with 2 minutes remaining.  Tibau attempts to pass and is able to get to half guard as Al Silawi unsuccessfully attempts to sweep.  Notedly, Tibau seems content to just lay without really getting damage off as Al Silawi is able to regain the full guard and work himself back to the cage to attempt to get up with 45 seconds remaining.

Tibau expertly sucks out Al Silawi’s hips and prevents the get up and finally begins throwing some small ground and pound.  The 10 second clapper hits and Tibau answers the call with some strikes.  The fight ends with Tibau on top and Tibau seems to believe he’s done enough.  Al Silawi outstruck Tibau by 2 strikes so it all comes down to how highly the judges value Tibau’s takedowns and control despite a lack of damage.

FPR, Randy, and Kenny all have the fight for Tibau, but we have a split decision! Wow! Jarrah Al Silawi gets the split decision and 3 points in the welterweight standings and Tibau continues his streak of being involved in some very strange decisions