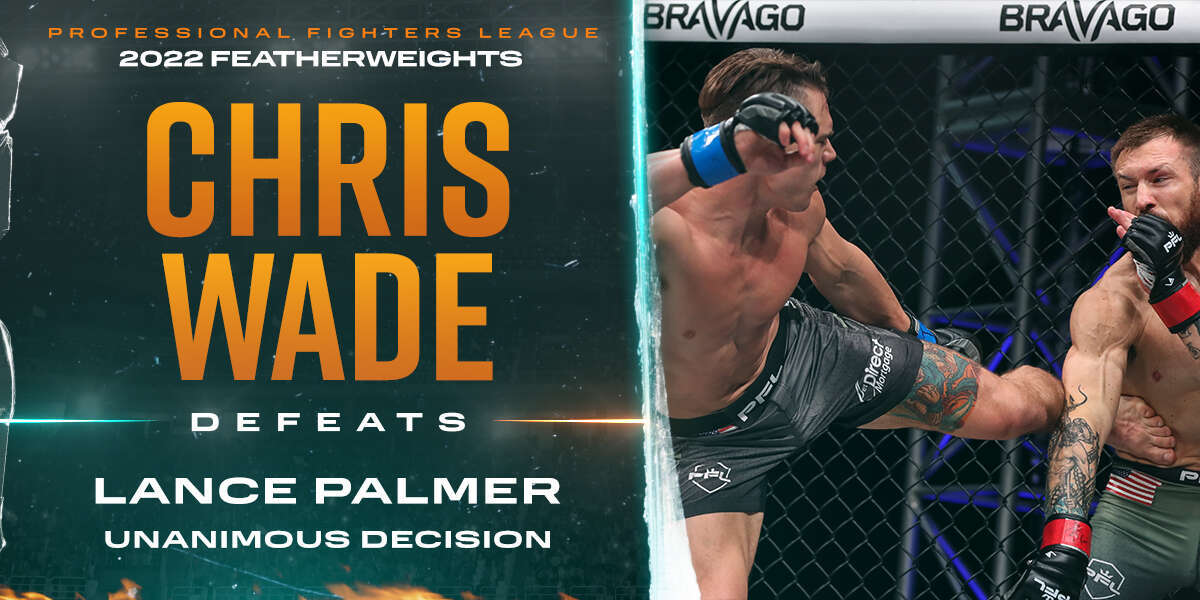 2 of PFL’s most recognizable faces meet in the Smartcage in the co-main event of the evening as 2x PFL featherweight champion Lance Palmer (22-5) takes on 2021 Finalist Chris Wade (20-7) in a bout where both men have enter with championship aspirations.

Prior to last season, Lance Palmer had amassed an unblemished 10-0 record under the PFL banner.  In a surprise to many PFL fans and analysts alike, Palmer dropped 2 regular season bouts last year to semifinalist Bubba Jenkins and eventual champion Movlid Khaybulaev.  Palmer missed the playoffs for the first time in his career, and this year the 4 time All-American Wrestler and former Big-10 Champion looks to right the ship and add a 3rd world title and million dollar check to his collection.

Chris Wade moved to featherweight from lightweight last year and enjoyed his most successful PFL season yet. The Long Island native boasts his own wrestling credentials as well, winning a New York State Championship in high school.  Wade has never been stopped in 27 career fights and signed with PFL following a 5-2 UFC run.  Hopefully this clash of talented wrestlers brings us a fun fight!

They touch gloves and we’re off, either man can secure their place atop the standings with a finish.  Wade controlling the center of the Smartcage early.  Neither man throwing much in the first minute as Wade fires a front kick and Palmer returns fire with a cross.

They stop the fight briefly because Palmer got his eye grazed but we’re all good and back underway after a brief break.

Palmer lands another big cross that stops Wade in his tracks, but he recovers quickly and again starts moving forward.  Palmer missed with a cross, and Wade makes him pay with a short check hook and they reset.

Halfway through the round and neither wrestler has shot yet.  Wade is the longer fighter and is using his range well, throwing a lot of low kicks and sidekicks so strike from a distance where Palmer can’t hit him.

With 2 minutes to go its Wade lightly out striking Palmer but Palmer seems to be landing the heavier shots and affecting Wade more.  Wade changing stances a lot and showing Palmer a lot of different angles.

Wade’s striking has noticeably improved and he’s doing a great job of throwing a lot of variety.  The round winds down and it’s the same story, Wade landing more volume but Palmer landing power.  Very difficult round to score.

Wade opens the round with a hook kick that nearly lands on Palmer’s temple and follows it up with a bevy of straight punches.  Palmer responds by changing levels and shooting the first takedown of the fight which Wade easily shrugs off.

Wade decides not to break completely and keeps the clinch, grinding Palmer out against the cage.  90 seconds into the round they break and again Palmer lands that big left cross right on Wade’s forehead.  Wade clearly affected by the punch but keeps pressing forward.

Palmer lands a nice deep kick to the chest that knocks Wade off balance but Wade comes back with 3 straight punches that land.  Halfway through the round and Palmer is closing the gap on volume and still landing the bigger more powerful shots.

With 90 seconds remaining, Wade puts together a nice combo punctuated with an uppercut behind his straights, he’ll need more punches in bunches if he wants to win the fight.  Wade having a lot of success with his jab but he’s loading up on high kicks that can’t seem to find the target.

Both men exchange small blows as the round winds down with Wade continually pumping that jab out there and connecting.  A very similar round to the 1st in the end that saw Wade throwing and landing more volume and Palmer landing a few big power shots. That round may have been a bit clearer for Wade in the end but still very close, anyone’s fight going into the 3rd.

Verdict and FPR both give Wade the 2nd and we are underway.  Wade again having success with his low kicks, throwing one about a minute into the round that almost takes Palmer’s rear leg out from under him.

Palmer shoots again and for a brief moment, Wade threatens with a guillotine choke.  The choke isn’t there but Wade is able to use it to get back to his feet where he fires a massive uppercut on the disengage that almost connects.

Wade appears to be the fresher fighter at this point and it appears Palmer is having some trouble with those leg kicks starting to affect his movement.

With 2 minutes to go, Wade seems to have all the momentum and is adding to his striking advantage.  Palmer has been on his back foot this entire round and really hasn’t been able to get any offense going.

With a minute to go in the fight Wade partially lands a wheel kick that knocks Palmer off balance, though he quickly recovers.  Palmer likely needs something big at this point to steal this fight but he doesn’t seem to have any plan to turn hit the gas.

Wade throws a naked low kick at the 10-second clapper and Palmer blasts him with that same left cross he has had success with.  Wade eats it and they finish the fight and hug it out.

Wade likely wins 2 and 3 and therefore the fight as a slight underdog. Regardless, the trend of featherweight decisions will continue and the division remains wide open as we begin to assess the playoff picture.

Chris Wade takes his place atop a crowded featherweight division with 3 points as he defeats 2x PFL champion Lance Palmer, who has now dropped 3 straight fights.