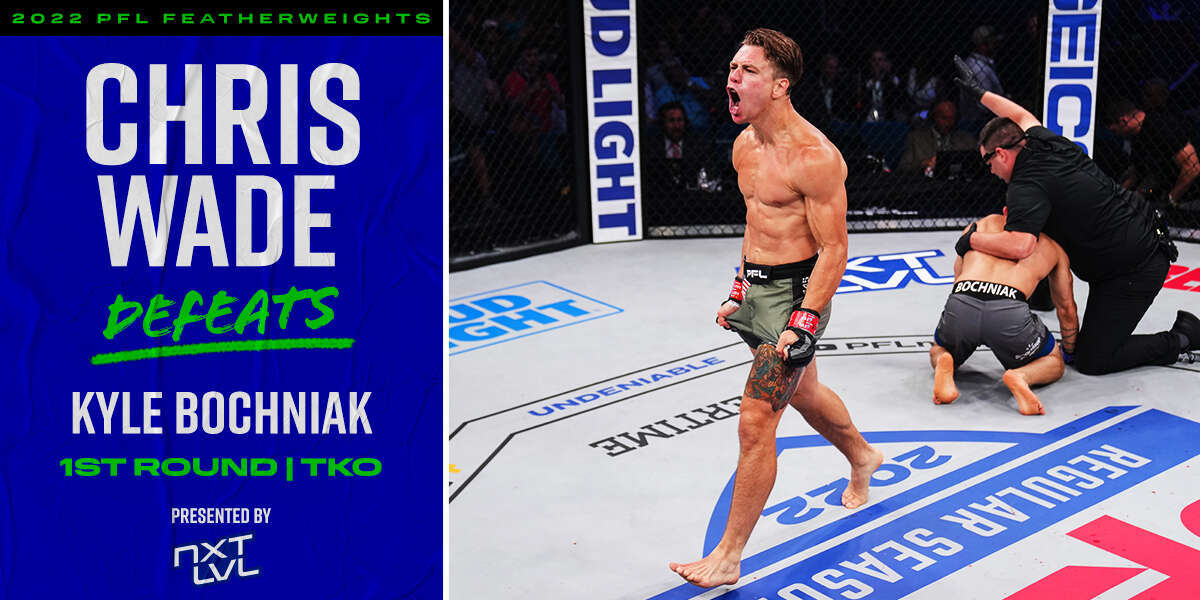 In what promises to be an action packed affair, Long Island’s Chris Wade (21-7) takes on fan favorite action fighter Kyle “Crash” Bochniak (11-6).  Last year’s Runner-Up at Featherweight, Wade has been in phenomenal form of late, opening his 2022 Regular Season campaign with a decision win over Lance Palmer which earned him 3 points.  Bochniak dropped his first fight of the year to 2021 Semi Finalist Bubba Jenkins and will need an early finish to keep his playoff hopes alive in a crowded Featherweight division.

Now in his 4th season with the PFL, Wade has seen a career resurgence since dropping to Featherweight, finally breaking through the semifinals last season to become the runner-up to Movlid Khaybulaev.  A New York state wrestling champion in high school, Wade is an accomplished martial artist who racked up a 5-2 record in the UFC before competing in the PFL.  Having never been finished in 28 career fights, Wade looks to clinch a playoff spot with a win tonight.

Kyle Bochniak may not have had the ideal start to his PFL tenure, losing a decision to Bubba Jenkins, but with a 1st round finish he can still keep his playoff hopes alive.  Now 10 years sober, “Crash” credits MMA for turning his life around and has never been in a boring fight.

We’re underway and they’re coming out swinging! Both men land in a wild 1st exchange.  Wade settles in and lands a nice side kick and front kick.

Wade shoots and briefly gets the fight to the mat but Bochniak pops right back up.  Bochniak seems to be having an issue with his lead leg and OH! Wade lands a big head kick and Bochniak hits the floor!

Wade swarms him and pours on the ground and pound before the ref decides he’s seen enough, that’s a Quick Six and a clinched trip to the playoffs for Chris Wade!

Chris Wade stops Kyle Bochniak in the 1st round to clinch the top seed in the 2022 PFL Playoffs!