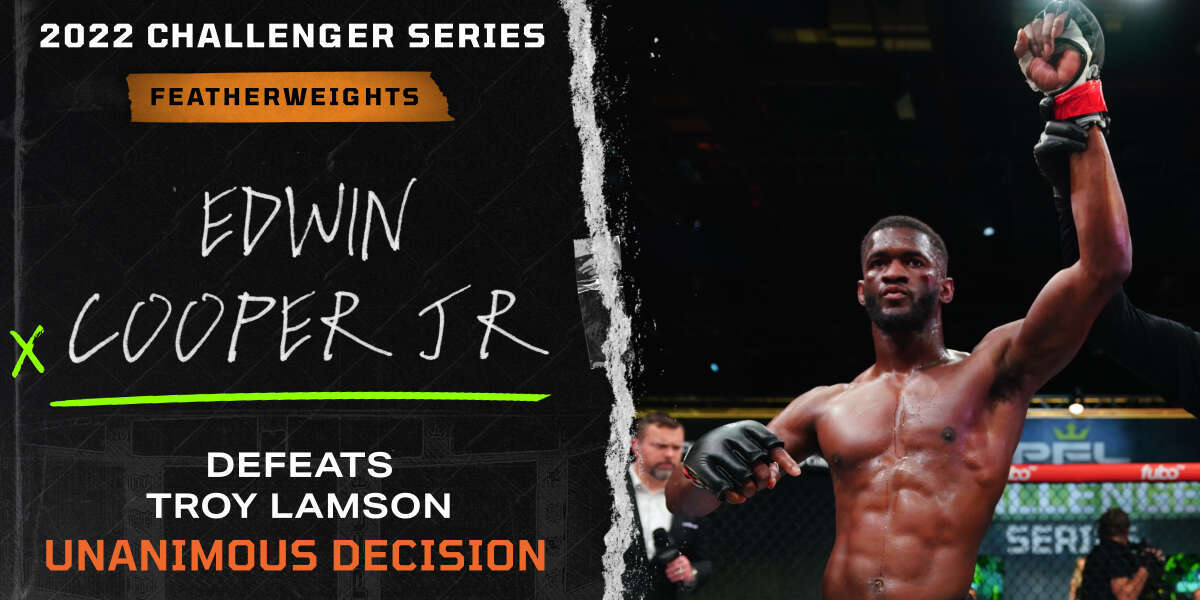 Experience vs. hype. The seasoned vet vs. the hot prospect.

Cooper –– a standout collegiate wrestler out of the University of Iowa –– transitioned to MMA in 2017 and is just six fights into his professional career, going 5-1 in the process.

Lamson, meanwhile, is just one year older than Cooper (30) –– but he’s several fights deeper in his career. At 13-4 with six submissions and four TKOs, Lamson boasts a major advantage in terms of experience

Cooper is out of the corner like lightning, landing shots and taking Lamson to the mat before the bell even sounded. He’s going berserk from top position here, raining down blow after blow with Lamson stuck in the crucifix.

Nothing appears to be hurting Lamson though, and after a minute-plus of punishment, he escapes … for now. Cooper remains stuck to him, dragging the fight back to the mat just as Lamson appeared to get back to his feet.

Twenty seconds left in the round, and this is almost definitely a 10-8 for Cooper. That was a mauling.

Credit Lamson for surviving, but that wasn’t what he’s after here. He’ll need to adjust for Round 2.

Cooper advances aggressively once again. He bullrushes with strikes, closes the distance, and gets Lamson to the mat.

This time, though, Lamson pops to his feet –– and Lamson hurts him! A wild series of punches punctuated by a huge uppercut and some hooks visibly wobbles Cooper, and Lamson’s corner is losing its mind as their fighter turns the tables.

He fires away, but Cooper survives, clinches, and secures another takedown. Clearly, Cooper’s lost a little steam here, as he’s grappling strictly for position at this point with little ground-and-pound or threatening offense.

After that burst from Lamson, it’s been all Cooper. Lamson’s avoiding damage better this round, but the control clearly goes to Cooper once again as Round 2 comes to an end.

It’s time for the final round. Cooper shoots a takedown in the first 15 seconds. Lamson attempts a counter knee, but it doesn’t land cleanly and to the mat they go.

Lamson’s back to his feet, Cooper shoots again, and Lamson’s looking for the front choke. That looked threatening for a hot second, but Cooper is free in a flash.

Now, however, it’s Lamson pressing forward for the first time. He’s pumping a jab out there nicely and putting pressure on Cooper. Both men are visibly tired midway through this final frame. A head kick misses from Lamson.

Cooper continues to circle and move, getting away from his wrestling attack. Lamson with a nice overhand right there, and he’s cranking up the intensity a bit. He likely needs a finish, and he’s fighting like he knows it.

Still, Cooper’s avoiding any major shots, and this one’s headed to the judges.

Easy call. Lamson had his moments and displayed a ton of heart, but there’s no denying that win belonged to Cooper.