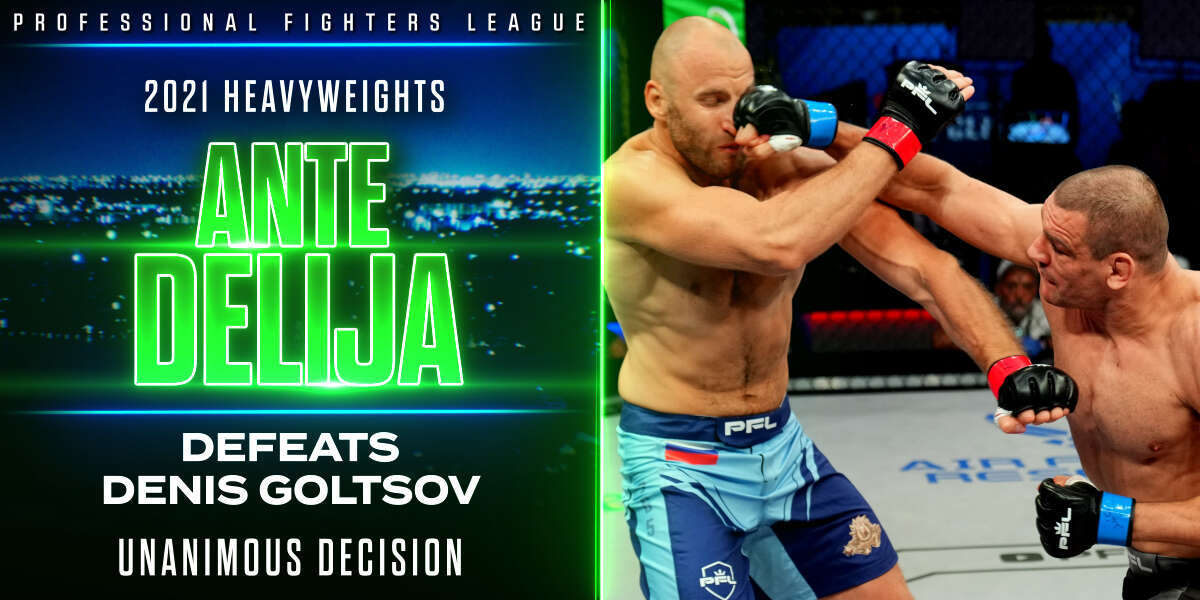 The PFL Playoffs opened the main card Thursday evening on ESPN with a heavyweight banger between No. 2 seed Denis Goltsov and No. 3 seed Ante Delija.

Goltsov rolled into the bout fresh off two TKO finishes during the PFL Regular Season, while Delija went 1-1, losing to No. 1 seed Bruno Cappelozza before defeating Chandler Cole via first-round TKO.

With a spot in the PFL World Championship and a chance at the $1 million prize on the line, here’s who got the job done.

Goltsov’s working the jab immediately, keeping Delija at bay. Delija shoots for the takedown, and Goltsov defends, eventually getting pressed against the cage. They exchange knees in the clinch.

Another jab from Goltsov, and Delija taunts him, throwing his arms up and asking for more. Delija presses forward aggressively, looking for the knockout blow. Goltsov avoids any damage initially, but Delija fires back with a strong right hand that snaps Goltsov’s head back.

Goltsov eats it well, and he clinches, pressing Delija against the cage and earning a takedown. He goes to work from half guard. A few seconds there, and Goltsov moves right to mount. Delija bucks and forces a scramble, turning the tables and winding up inside Goltsov’s full guard.

Nice control from the bottom by Goltsov, as he’s shutting down Delija’s offensive efforts. The round ends there, Delija on top.

Goltsov’s back on the jab, and he narrowly misses with a head kick. Delija chuckles, realizing the danger that just whizzed past his dome.

Delija fires a strong right hand moving forward, but Goltsov counters beautifully with a jab and may have briefly stunned his foe. Tough to say if it was a slip or a knockdown, but Goltsov is capitalizing. He turns it right into a takedown, and he’s hammering Delija with powerful shots up against the cage.

Smartly, Delija covers up and survives, working his way back to his feet. They clinch, and after a stalemate, Delija explodes and takes Golstov to the mat, working top position. Once again, Goltsov is able to avoid any serious damage, but Delija does posture up and land a few blows with 10 seconds to go in the round.

We go to the third and final frame here –– and it could all come down to this.

Delija comes out aggressively and immediately secures the takedown. Rather than simply controlling Delija this time, Goltsov’s now opening his guard and swiveling his hips, attempting to set up a submission. Nothing’s there though, and Delija maintains position without issue.

Halfway through the round, and it’s all Delija’s thus far. He’s not landing much significant offense or passing, but top control no doubt scores well in the judges’ eyes. With two minutes to go, Goltsov explodes back to his feet, but Delija’s back on him, pressing him against the cage.

Goltsov gets a kimura grip, but Delija keeps his arm inside to avoid danger. Delija is just grinding away here, pressing Goltsov into the cage and burning time.

Another kimura attempt from Goltsov, another unsuccessful bid. Delija avoids it, but Goltsov is able to separate, where he lands a strong right hand. He follows that up with a knee then clinches Delija once again.

Ten seconds to go, and Delija is walking away, knowing he likely has the fight in the bag.

Fighter Performance Rating (FPR) scored the fight two rounds to one in favor of Delija –– and the judges agreed.

With that, Delija punches his ticket to the PFL World Championship and completes the upset of the No. 2-seeded Goltsov.