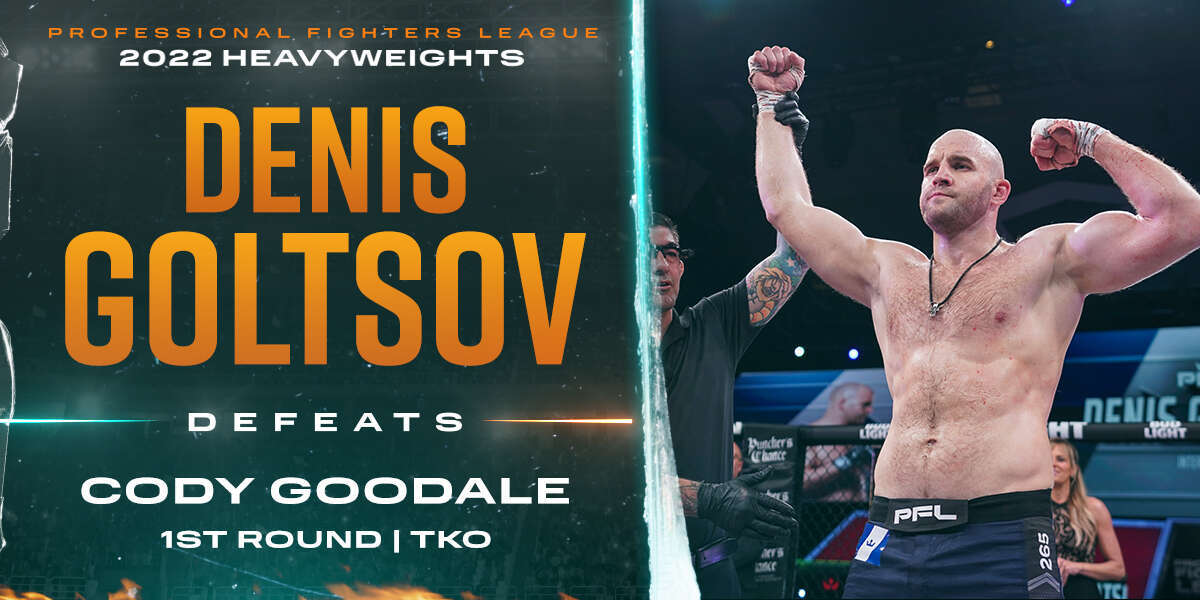 Main card time! 2x PFL semifinalist Denis Goltsov (27-7) welcomes Cody Goodale (8-5) to PFL.  Goltsov, a 2x World Sambo champion, Goltsov prides himself on being a well rounded and well skilled heavyweight.  Of his 27 career wins, 12 have come by way of knockout and 10 by way of submission.  Goltsov won both of his regular season bouts last year before being upset in the semifinals by Ante Delija and looks to prove that the third time is the charm and breakthrough the semifinals at last to claim gold and the 1 million dollar prize this year.

Goodale, a U.S. Army veteran, brings with him to PFL a resume that includes 4 wins in his last 5 fights and 3x Department of Defense Heavyweight Championships.  Notably, Goodale’s only loss in those 5 fights came in a CFFC bout with 2021 PFL semifinalist Jamelle Jones.  Goodale enters his first PFL season on only 1 weeks’ notice as he moves from alternate to replacement for Samieula Kei who was forced to withdraw from the bout due to visa issues.

And our main card is underway!  Both men standing in the center of the Smartcage not looking to cede ground.  Goltsov lands a stiff jab and suddenly Goodale seems less set on hanging out in the pocket.

Goltsov cracks another big jab that appears to stun Goodale a little bit.  He lands again and snaps the head back before initiating the clinch and hitting a beautiful outside trip takedown.  Gotlsov now on top with 3 minutes remaining getting some big shots off.

Goltsov briefly traps the arm for a crucifix but instead decides to posture up and focus on damage, landing some big punches.

It appears Goodale might be bleeding from his nose after the ground and pound and now it appears his eye is swelling up.  Goltsov maybe gets away with an elbow, which is not legal under the PFL scoring system.

Goltsov continues pouring on damage and just like that, the ref has seen enough and stops the fight in the first round. That’s 6 points for Goltsov and is good enough to supplant Ante Delija for first place in the heavyweight standings for now.

Dominant showing from Dennis Goltsov as we finish with a landed strike ratio of 30:2 and we have our first 1st round finish of the PFL season!