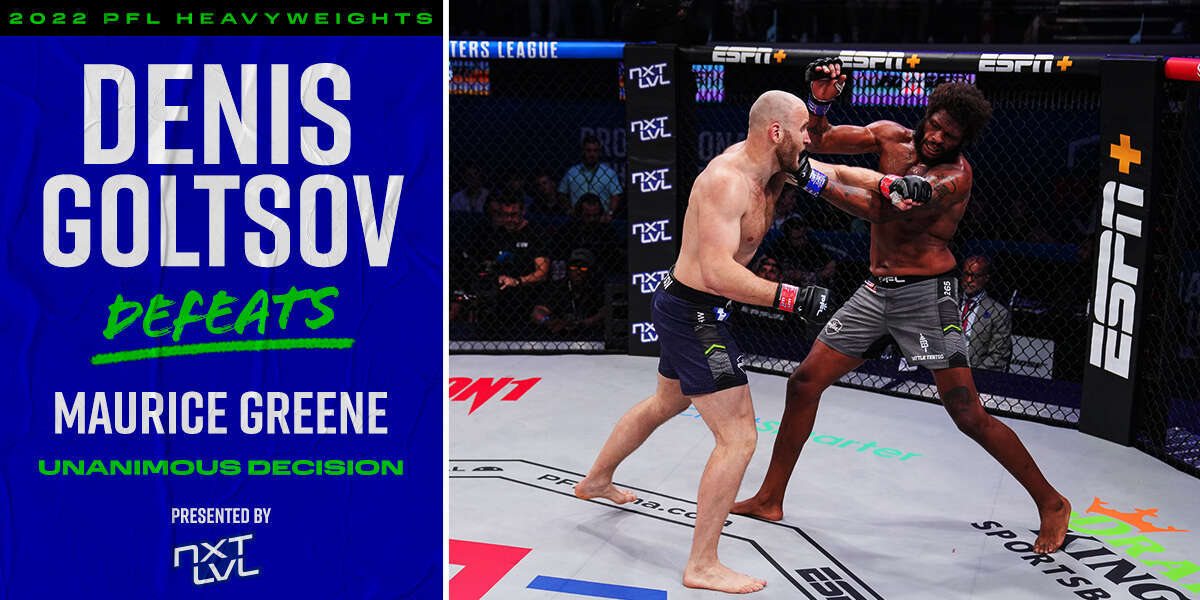 Kicking off the ESPN card, PFL mainstay Dennis Goltsov (28-7) takes on league newcomer and UFC veteran Maurice Greene (10-6). Goltsov currently finds himself in 2nd place in the Heavyweight standings following an impressive 1st round TKO over Cody Goodale which garnered him 6 points. Goltsov will clinch a playoff spot with a win of any kind as he seeks his 3rd consecutive PFL Playoff appearance.

A prolific finisher, Goltsov has finished 23 of his 28 career wins. He is also impressively well rounded, using his combat sambo background to amass 13 knockouts and 10 submissions. Goltsov has fought his way to an impressive 6-2 record in the PFL and after 2 semifinal appearances, he hopes this year he can breakthrough and win a PFL World Championship and 1 million dollars.

“The Crochet Boss”, Greene makes his PFL debut coming off a win last month in CES. After a flurry of 1st round Heavyweight finishes, Greene will need a Quick Six in order to have any hope of making the playoffs. At one point, Greene weighed 330lbs before finding kickboxing and falling in love with MMA.

We’re underway with over 14 feet of Heavyweight in the SmartCage!

Right off the bat the speed advantage for Goltsov is apparent as he is able to counter Greene with a stiff jab before closing the distance and securing the takedown from the clinch.

Goltsov is now in top half guard looking to posture up as Greene stays busy trying to better his position and work his back to the fence to start building a base and working back to his feet.

As Jon Jones yells directions at Greene, Goltsov is able to suck out the hips and start raining down some big shots.  Goltsov is doing a great job using head position to keep Greene glued to the mat before again posturing up and throwing some strikes.

Goltsov briefly attacks an arm triangle before Greene is able to regard, but only briefly as Goltsov passes off to half guard and keeps the pressure on with strikes.

Goltsov again attacks the arm triangle and it’s getting tight! Goltsov is able to scramble back into position but he’s a bit high on the choke.  Goltsov lets go of the choke but is able to use it to pass to full mount where he presents a massive danger.

Greene is holding onto Goltsov’s head and neck attempting to keep from taking damage as Goltsov looks to posture up and work towards ending the fight.  Greene is doing a good job defensively and seems content to try to just survive the round at this point.  As the 10 second clapper hits, Goltsov lands some big punches for the road to end what is very likely a 10-8 round.

Round 2 is underway and instantly Goltsov closes the distance and looks to take the fight back to where he had a clear advantage.

Greene loses his footing and Goltsov takes advantage, diving into Greene’s guard and going straight to work softening him up.  Goltsov briefly stacks the guard before landing a nice left but Greene is again doing a good job defensively to keep anything big from landing.

Goltsov is starting to land some bigger shots now as Greene again closes his guard.  One would like to see a bit more effort to better position from Greene here but that is of course much easier said than done.

Greene seems to be attempting to isolate an arm and attack a triangle or armbar but Goltsov is wise to it and isn’t giving him an inch, as Goltsov attempts an Ezekial choke with about 2 minutes remaining in the round.

The referee decides he isn’t seeing enough activity and stands them up and Goltsov throws a nice lead roundhouse before again engaging a clinch and driving Greene back into the fence.  Greene briefly takes Goltsov’s back but Goltsov is able to reverse and land another takedown, this time landing in a heavy side control with a minute to work.

Goltsov throws a knee to the body before taking a momentary breather.  After catching his breath Goltsov attacks an Americana and takes the back and as the 10 second clapper hits Greene is able to get back to his feet.  Greene has yet to land any significant offense through 2.

Goltsov appears a bit gassed as we begin our final stanza, and with 2 rounds comfortably in the bank one wonders how aggressive he will be.  Greene lands a nice right hand, probably his best strike of the fight before Goltsov again clinches and starts working to get the fight to the mat.

Goltsov waits patiently for an opening before hitting a beautiful outside trip and landing in side control again.  Greene attempts to walk the cage again but Goltsov quickly scoots him towards the center of the SmartCage.  Goltsov looks to pass to mount but Greene is able to regain half guard before Goltsov postures up and lands a big right hand.  Jon Jones calls for a standup from the corner but the ref seems content to let Goltsov work as the crowd chants in agreement with Jones.

After another few seconds the ref obliges Jones and the crowd and stands them up and now it’s Greene looking for a takedown of his own and throwing knees to the body in the clinch.  And just like that, Goltsov again is able to land a trip with his back to the cage and winds up on top.

Denis Goltsov proving to be too much for Maurice Greene.

Goltsov quickly takes the back but is unable to do much with it as Greene works back to his feet briefly before being taken down once again.  Goltsov’s work in the clinch has been absolutely fantastic tonight and he seems to be in peak form. With 45 seconds left, Goltsov is content to coast to the finish line with a comfortable victory.