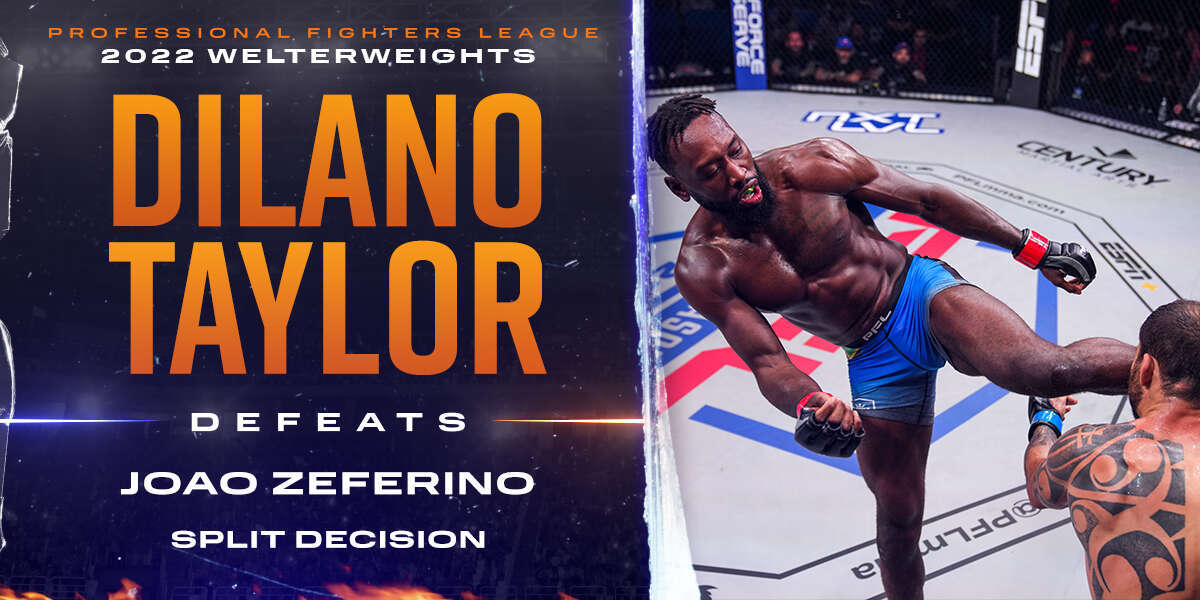 Taylor, who only turned pro in 2019, went 5-0 in Titan FC and captured their welterweight title.  Taylor won his week 2 Challenger Series bout but was not awarded a contract, but luckily for him he stayed ready for the call and now steps into the PFL regular season looking to build on his 7 fight win streak.

Zeferino, an established PFL veteran, made the playoffs in both 2019 and 2021 but was forced to withdraw due to injury both times.  He looks to prove he is championship material this season.  With 17 career submission wins, far and away the most in the division, Zeferino is a dangerous submission artist and will easily be the toughest test of Taylor’s young career.

Taylor opens the round with a calf kick as Zeferino takes the center of the cage and returns with a straight and a hook.

Zeferino wastes no time looking for the takedown and gets him down but Taylor quickly pops back up to his fight.

Just as quickly as he got up, Zeferino takes him down again and Taylor gets up again.

For a third time, Zeferino gets the fight to the mat and locks up a body triangle looking to attack a rear-naked choke.

What a grappling pace so far! Taylor is able to turn his hips in and reverse position and wind up on top but he only keeps it briefly as Zeferino is able to butterfly sweep back to the top position.  Zeferino passes to side control and quickly locks up a crucifix but just like that Taylor explodes again to get out of the crucifix but winds up with Zeferino on his back once again.

Zeferino gets the body lock again and starts softening Taylor up with short shots before starting to attack an RNC.

OH! Zeferino quickly snatches an armbar, extends it, and it looked like the fight was over but again Taylor is able to slip out the back door and get back to his feet, incredible scrambles so far.

Zeferino appears to be calculating his next move, perhaps frustrated at his lack of success in the grappling so far, and oh me oh my, Taylor lands a big head kick that forces Zeferino to try to grab the leg and he takes some damage from Taylor as the round ends.

Taylor takes the center of the cage again to start and Zeferino wastes no time attacking a single leg and trying to snatch a leg lock. Taylor is wise to it and gets himself out of danger and is back to controlling the center of the Smartcage.

Taylor attempts a switch kick that lands on Zeferino’s guard but Zeferino appears to be showing some fatigue after all of these unsuccessful grappling attacks.

Although he seems a bit hesitant to overextend against the submission wiz, Taylor is controlling the range right now and using his kicks well.  Zeferino appears a bit flustered but is now starting to put some offense together and mixing in feints and level changes to keep Taylor at bay.

Taylor lands a stiff jab with 2 minutes to go in the round and he has absolutely been the man advancing and closing distance as he uses that jab to try to set up other offense.

Zeferino lands a spinning back fist to the body and gets in deep on a single as he looks for a takedown with a minute left in the round, but Taylor digs for underhooks and breaks the clinch, landing a nice knee for his troubles.

The 10-second clapper hits and both men seem content to catch their breath in the center of the cage, what a fight so far.

30 seconds in Zeferino throws and misses an overhand right and transitions into a double leg attempt but can’t finish it.  He attempts to pull guard and may be getting a little desperate now.

Taylor wisely doesn’t engage on the ground and waits for the stand-up.  They clinch and interestingly Taylor seems content there, throwing a few shoulder strikes before eventually breaking and retaking the center of the Smartcage.

Zeferino is moving mostly laterally and making Taylor chase as Taylor continues to have success with the jab.  Zeferino calls for action but he himself has a significantly lower output than Taylor so far.

With 2 minutes left Zeferino shoots again and Taylor easily gets out of the way, Zeferino is going to need to make something happen here if he wants to keep his 5 fight win streak alive.

Zeferino appears visibly tired but lands a nice left hook with 45 seconds left in the round and changes levels again.  Taylor throws a few elbows and gets reprimanded by the ref before Zeferino finally gets the fight to the mat again.  Zeferino throws a flurry of ground and pound to end the round and walks away with his hands raised.

What an impressive debut from Dilano Taylor, it would appear “The Postman” is here to stay! Another super close decision as we seem to have a recurring theme tonight as Taylor earns himself 3 points and is now tied with Al Silawi and Sadibou Sy atop the welterweight standings.