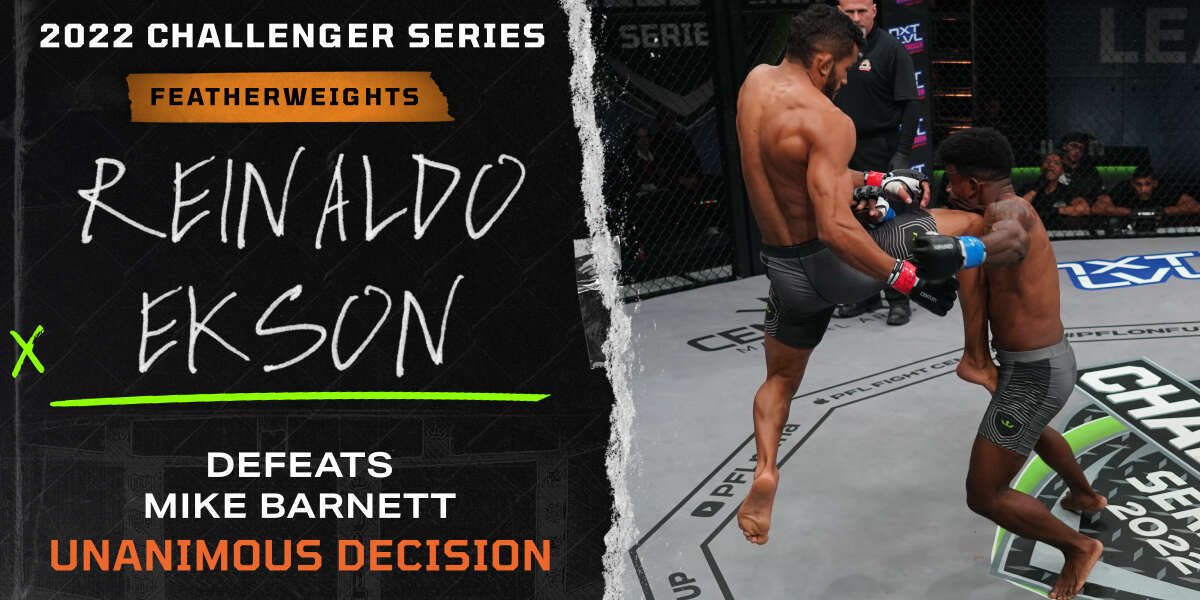 Ekson has 10 finishes in his 17 wins (three knockouts, seven submissions), while Barnett has knocked out nine of his 15 opponents to date.

Which man will earn the win and the chance to snag that shiny new PFL contract at the end of the night?

We’re underway. Ekson misses with a leg kick as he attempts to gauge the range early. Ekson lunges in with a flying knee, and Barnett counters it with a left hook. That was a risky move from the Brazilian this early in the fight.

Another check left hook catches Ekson on the way in. That one definitely landed more cleanly, and Ekson looked staggered momentarily.

Takedown from Ekson, but Barnett scrambles well to get back to his feet. Ekson’s all over the neck now looking for the guillotine, but it’s not there and they separate. Back to the center of the cage.

Nice low kick from Ekson. Barnett catches a nice check knee from Ekson on the way in, and he quickly retreats and recalibrates. Nice timing there.

They clinch against the cage, with Ekson digging in some knees. Trip attempt from Ekson, and he gets it, but there’s no control, and Barnett’s right back up to end the round.

Fairly calculated fight thus far, but it appeared Ekson gained some confidence as that round progressed.

Quick start here from both men. Ekson’s feeling it and leading the dance, and Barnett appears content to counter.

Now Barnett pushes forward, initiating the clinch, and he gets the body lock takedown against the cage. Ekson’s looking for the neck and searching for the guillotine, but there’s nothing there yet.

Ekson adjusts, and it’s tighter. Barnett defends nicely though, popping his head out to safety. He’s on top inside Ekson’s full guard.

The round ends there, with Barnett chipping away from the top.

This is a close fight thus far, and Round 3 could very well determine the winner.

Barnett’s out quickly with a leg kick and Ekson returns the favor. Now, Barnett wings a counter left hook, but it’s off the mark.

Barnett slips, and Ekson’s all over him. Ekson’s searching for a D’Arce, but Barnett defends. He gets back to his feet, they clinch, and Ekson briefly looks for a front choke, but it’s not there.

They return to striking range, and celebrity judge Vitor Belfort isn’t pleased with the lack of aggression from either man.

“They’re fighting not to lose,” he says on the broadcast.

The celebrity judges felt Ekson would take the decision –– and he did.