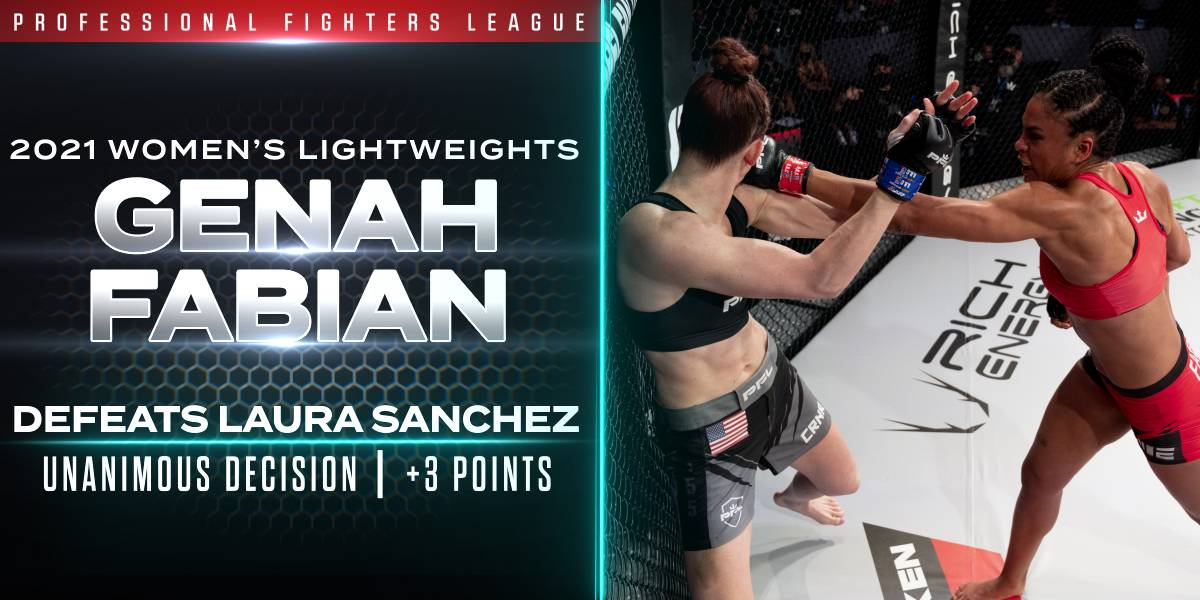 Returning Women’s Lightweight combatant Genah Fabian (3-1) welcomed League newcomer Laura Sanchez (1-1) to the PFL cage on the Regular Season’s third event on Thursday, May 6. New Zealand’s Fabian competed twice during last season, splitting her two bouts. The 6-foot-1 Sanchez was a collegiate basketball player and entered her League debut riding the momentum of a first-round stoppage in her pro debut.

Sanchez marched forward into the clinch to start the second frame, but she was spun to the fence by Fabian. The Muay Thai stylist again landed a combination as she separated from Sanchez. Fabian delivered a body kick that prompted Sanchez to clinch for a brief moment. The kicks of Fabian continued to land and Sanchez appeared frustrated. The fight returned to the clinch and the two Lightweights took turns pushing one another against the cage. Short knees from Fabian found a home as she controlled Sanchez. They returned to striking range as the frame came to a close.

It was Fabian who initiated the clinch in the last stanza. She pushed Sanchez to the fence before breaking the position and throwing power shots. A clean left from Fabian caught Sanchez flush and she followed it with a body kick. There was more clinch work midway through the round as the grueling pace continued. A right hand from Sanchez landed as she found some space to throw, but Fabian immediately put her back against the fence. A large cut opened over the right eye of Sanchez with less than two minutes left in the fight. Fabian kept pressuring Sanchez as the fight neared its end. They exchanged heavy shots in the final seconds, but neither fighter went down.

After three rounds of action, the judges at cageside awarded Fabian the decision win and three points in the Women's Lightweight standings.