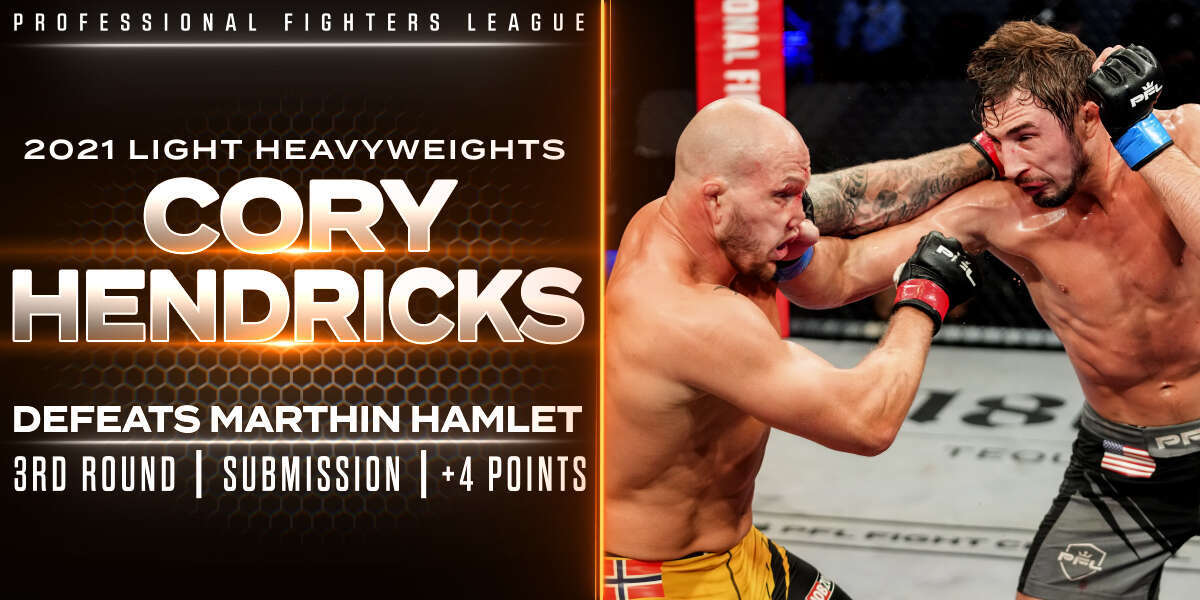 PFL 5, 2021 rolled on Thursday evening on ESPN+ with a Light Heavyweight throwdown between Marthin Hamlet and Cory Hendricks.

Hamlet surprised many in his PFL debut, submitting Dan Spohn with a second-round arm-triangle choke from closed guard and earning five points in the process. Hendricks, meanwhile, made his PFL debut at the event as he looked to upset the red-hot Norwegian.

Many felt Hamlet would take care of business with ease, but did Hendricks have a surprise up his sleeve in his promotional debut?

Hendricks lands a leg kick early, immediately following up with another kick, this time up high. Hamlet shoots for the takedown, touching the mat for just a second before Hendricks works back to his feet. They clinch against the cage.

Hamlet gets the body lock, but Hendricks shows off impressive balance and takedown defense, staying upright throughout multiple takedown attempts. Hamlet lands a few inside knees from the clinch while Hendricks pummels for position.

Now, Hamlet drags Hendricks to the mat but can’t keep him there. They separate, and Hendricks again opens up with strikes. A high kick is blocked, and Hendricks follows up with a naked low kick that Hamlet sees coming. The counter is perfect, a stinging right hand down the pipe that puts Hendricks on the retreat.

He follows up with a combination that drops Hendricks, but Hendricks survives and clings to a leg. Hamlet is happy to grapple, and he winds up on top with one minute to work. Hamlet looks for the arm-triangle choke, but Hendricks immediately bucks and turtles before working to a knee against the cage.

Hendricks survives to see another round.

They open up with a huge flurry, and Hamlet slips to his back. Hendricks pounces, but Hamlet regains his composure and shoots for a takedown. They clinch against the cage once more. Hamlet looks fresh here as he continues to chip away with short shots.

Referee Gasper Oliver wants them to work, and he separates the two. Hendricks lands two kicks after the break, but Hamlet is right back inside, looking for the takedown from the clinch. This time Hendricks breaks without referee intervention and slips while throwing a low kick. Hamlet flies in with a flurry, but nothing finds its mark. They return to the clinch against the cage.

Twenty seconds left, and Hendricks spams the left high kick while Hamlet again secures the body lock. This time, the Norwegian drags him to the mat just as time expires in the second frame.

Hendricks with a beautiful shuffle into a leaping right hand to kick off the round. Unsurprisingly, Hamlet shoots and forces Hendricks against the cage. Currently, Hamlet enjoys a 128-20 advantage in total strikes landed. If Hendricks wants to win this one, he likely needs a finish, but Hamlet is clinging like Saran Wrap with three minutes left in the fight.

Midway through the round, Oliver’s seen enough, and they separate. Hendricks kicks Hamlet’s legs out and lands some follow up strikes. Hamlet looks dazed, and Hendricks pounces. Electing for submission over ground-and-pound, Hendricks looks for the rear-naked choke, but Hamlet rolls. Hendricks maintains dominant position, hammering away with shots from the back.

Now, Hendricks fully sinks in his hooks and takes the back, putting Hamlet in a world of trouble with 90 seconds remaining. Hamlet leans forward, but Hendricks counters and sinks the forearm under the chin. This is unbelievable. It’s over!

Hamlet has no defense, and Hendricks completes the comeback.

Hamlet was one round from entering the 2021 PFL Playoffs as a heavy favorite in the Light Heavyweight division. And then Cory Hendricks finished him, once again proving just how volatile the sport of MMA can be. He earns four points and a potential spot in the Playoffs for his efforts.

What a fight. What a finish.