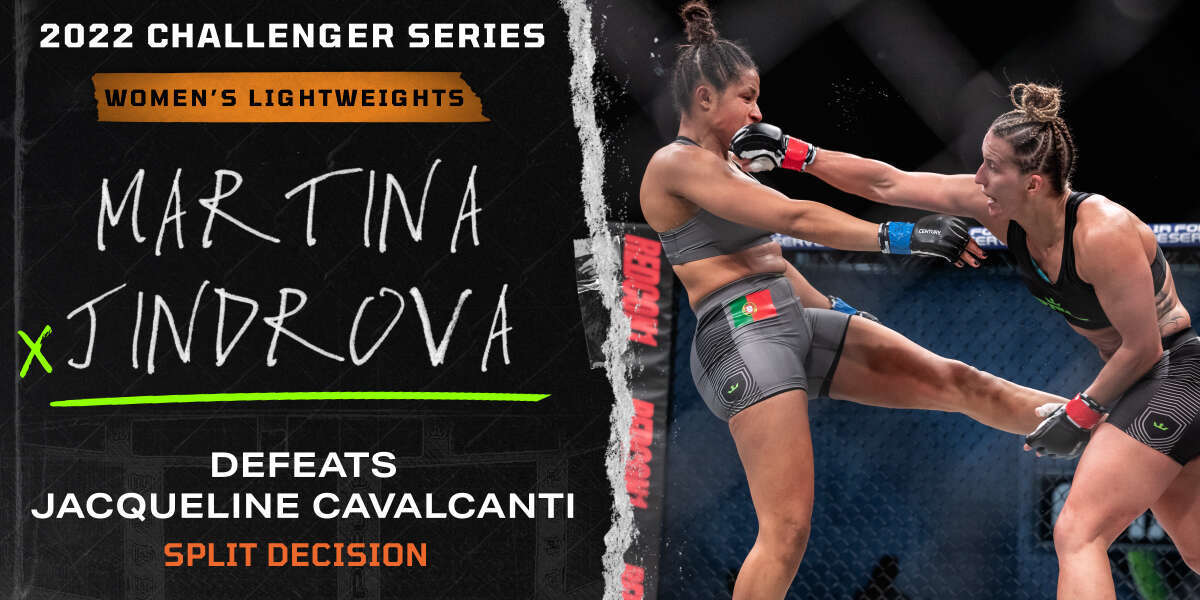 PFL Challenger Series 3 brought the heat early and often Friday evening, setting the stage adequately for Martina Jindrova and Jacqueline Cavalcanti to cap off the evening in the fourth and final fight of the night.

Jindrova boasts the most experienced resume of the evening, bringing a 3-2 record (one knockout, one submission) to the PFL cage. Cavalcanti, meanwhile, is undefeated through two pro fights, winning one by knockout and one by decision.

Who made the late push to impress the celebrity judges and the fans at home in an effort to take home the PFL contract?

They touch gloves, and Jindrova paws a jab early. Cavalcanti returns fire with a double jab of her own. Cavalcanti with a reach advantage, and it’s apparent, physically, early. Jindrova, the accomplished striker, will need to solve that puzzle as this fight progresses.

Calculated, tentative start here from both women. Now, Cavalcanti goes high with a kick, and Jindrova returns fire with a huge right hand that whiffs. Now they trade in the pocket, and Jindrova lands a solid, short right hand.

As celebrity judge Tyron Woodley notes, it seems these two are done feeling out the fight and are instead ready to sling leather. The pace is quickening big time.

Jindrova with a beautiful left hook, but Cavalcanti is right there, firing back. They’re both landing here, but neither will back down. Fun fight.

Thirty seconds to go in the round, and Cavalcanti misses with a front kick before landing with a strong jab. Tough round to call. Jindrova landed repeatedly with counters, but Cavalcanti pushed the action and acted as the aggressor for the majority of the first frame.

We see Round 2 for the first time tonight.

They’re right back after it. The output in this one is super impressive, but you get the feeling something clean is going to land at some point. They’re both firing away with heavy, heavy shots, and it just feels like a matter of time before one lands on the button.

Jindrova with a low kick, and Cavalcanti returns with a right down the middle. Now Jindrova presses forward, landing a hard shot on the chin of Cavalcanti. Leg kick followed by a left hook from Jindrova catches Cavalcanti’s attention.

Right hand from Jindrova hurts Cavalcanti, and she’s wobbling backward toward the fence. Jindrova swarms. Cavalcanti tries to shoot for a takedown, but there’s no power there, and Jindrova shrugs it off.

Another right hand, another knockdown for Jindrova, but Cavalcanti’s back to her feet again. She clinches and survives. Pure toughness and heart on display right there.

They separate, and now it’s Cavalcanti landing a series of hard shots. This fight rules, friends.

What a crazy 2nd round. How do you score it so far through two rounds?#PFLonFuboTV LIVE NOW
🇺🇸 https://t.co/R67yD8VVFQ
🌍 https://t.co/StPf5kcxnW pic.twitter.com/zr1D1K6639

Thirty seconds to go in Round 2 and Cavalcanti lands a left-right combo that catches Jindrova’s attention. Spinning backfist and a huge flurry from Jindrova ends the round. That was madness.

It’s remarkable that Cavalcanti is still in this fight after the shots she ate in Round 2. And not only is she in the fight, but she’s pressing forward and landing big shots.

This fight is just bonkers.

There’s no stopping from either woman here. Keeping up with the play-by-play is impossible with all the back-and-forth activity. Cavalcanti is landing the harder shots here in Round 3, but Jindrova is right there, always looking for the counter and mixing it up with low kicks and punches.

Thirty seconds left in the fight.

Cavalcanti misses with a winging right hand. Ten seconds left, and they flurry –– because how else could this end?

It will be interesting to see how the celebrity judges and fans at home weigh this performance.

Sure, it wasn’t a dominant first-round win like the first three fights of the evening, but Cavalcanti and Jindrova both showed a ton of heart and skill throughout this fight. No doubt in my mind either woman could make a splash in the PFL’s women’s lightweight division.