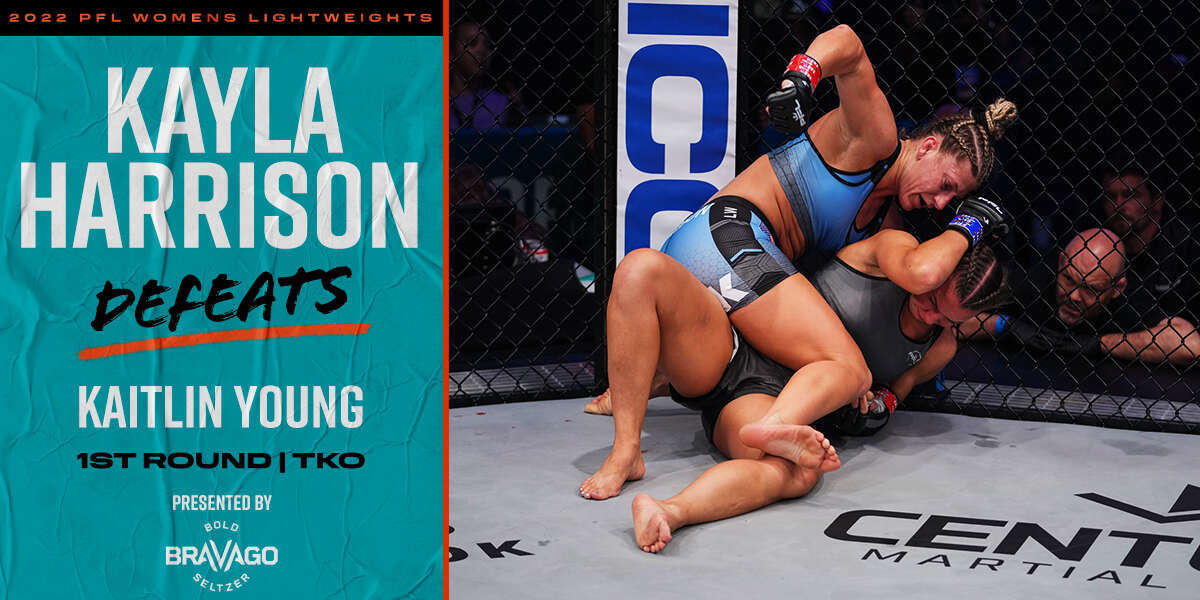 Main event time already! This evening’s main event features one of the biggest stars in the sport as the undefeated Kayla Harrison (13-0) steps into the SmartCage with late notice replacement Kaitlin Young (12-12).

Harrison was vocally displeased with her performance in her opening Regular Season bout, wherein she won a unanimous decision over Marina Mokhnatkina who became just the 2nd fighter to go the distance with Harrison (Larissa Pacheho has also taken Harrison the distance). The 2x Olympic Judo gold medalist will look to get back to her finishing ways tonight.  Were she to lose this bout, Harrison would likely find herself on the outside looking in at the PFL Playoffs.

Young steps into this bout as a replacement for Julia Budd who was forced to withdraw from the PFL Season with an undisclosed injury. Young, a pioneer of women’s MMA in her own right, has fought some of the best fighters on earth, previously sharing the cage with the likes of Julie Kedzie, Gina Carano, Liz Carmouche, and former UFC champion Miesha Tate, whom Young knocked out with a head kick. Can she shock the world tonight and stop Kayla Harrison? Let’s find out!

The fight begins with Harrison taking the center of the SmartCage and stalking Young.  Harrison fires a big left hand but can’t connect. Harrison is feinting constantly before landing a big left, changing levels, and violently throwing Young to the mat.

Harrison is now in top side control where she is so dangerous as she starts working for the crucifix. Young does a good job to get to the fence and try to walk the wall to reverse position. Young is unable to get up but is able to recover half guard before Harrison takes the back and starts unloading big right hands!

The referee warns Young to fight back as the right hands keep coming and that’s all she wrote! Harrison gets back to her finishing ways with a Quick Six to secure her spot in the PFL Playoffs once again.

THIS ONE IS OVER! 6 Point finish for Kayla Harrison! She is heading back to the #PFLPlayoffs!#2022PFL6 pic.twitter.com/nQktLRtJg2

Kayla Harrison secures the #2 seed in the PFL Playoffs with a dominant TKO.