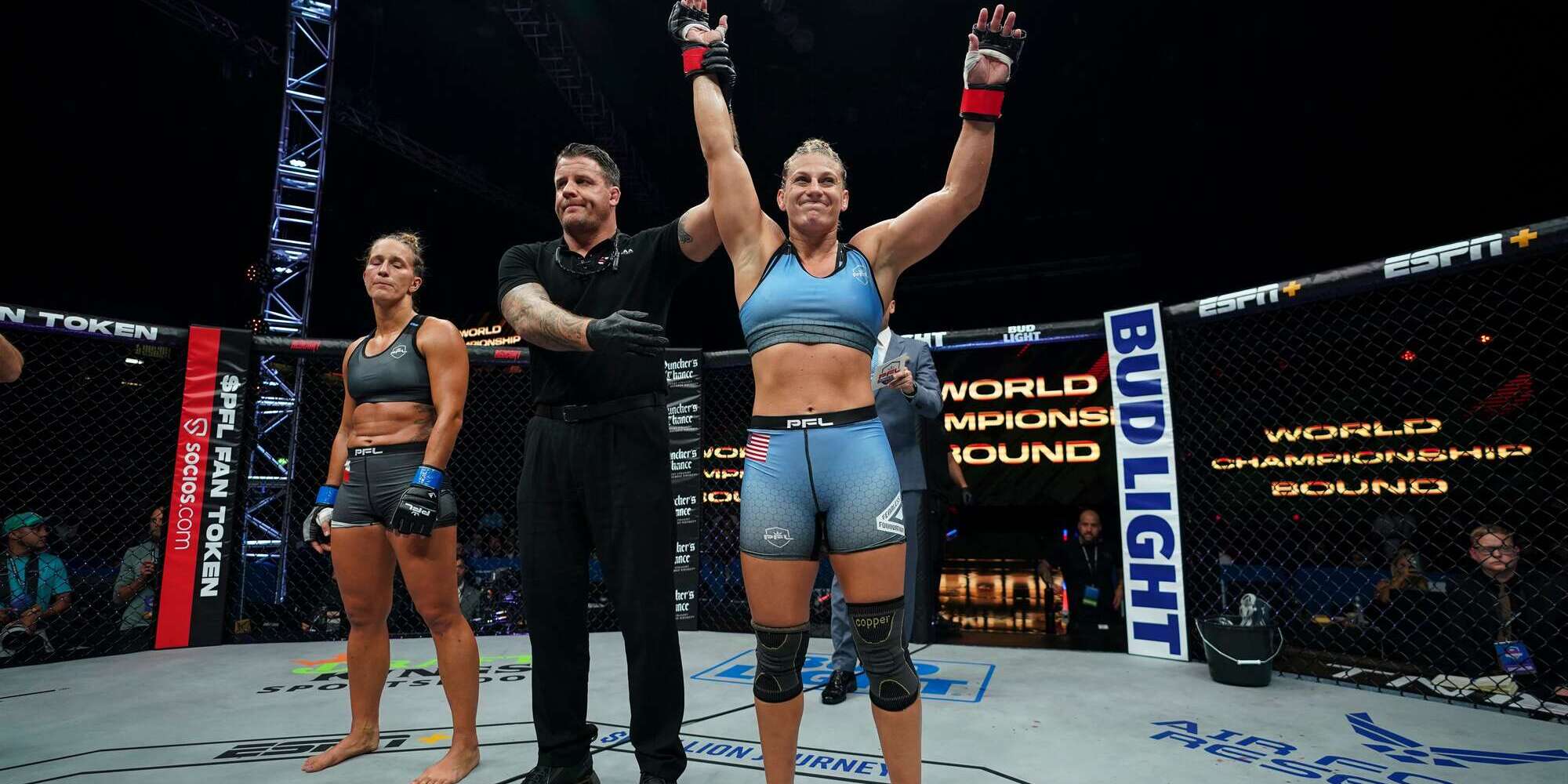 LONDON, ENGLAND - August 20, 2022 - The Professional Fighters League (PFL) resumed its 2022 Playoffs with an entertaining night of action at PFL 9 live from Copper Box Arena in London, England. The evening’s card featured four Playoff bouts across the Featherweight and Women’s Lightweight divisions, and four fighters punched their ticket to the 2022 PFL World Championship.

In the night’s main event, Kayla Harrison wasted little time advancing to her third straight PFL World Championship with a 1st round submission victory over Martina Jindrova. Harrison made her triumphant return to London, the site of her first Olympic gold medal win, and remained undefeated at 15-0, with 12 wins having come by way of stoppage. She now sets her sights on Larissa Pacheco and her third Women’s Lightweight championship.

In the evening’s co-main event, Brendan Loughnane and Chris Wade took their bad blood into the SmartCage, in one of the night’s most eagerly anticipated matchups. Loughnane took the fight to Wade with a consistent jab, and earned his spot in the 2022 PFL World Championship via unanimous decision. Loughnane, a native from Manchester, England, did not disappoint his countrymen, and now faces Bubba Jenkins in a championship fight for the $1 million purse.

The 2022 PFL Playoffs continued in the Featherweight division, where Bubba Jenkins faced off against Ryoji Kudo, with a trip to the PFL World Championship on the line. Jenkins put on a masterful display defeating Kudo via 1st round submission. Jenkins advanced to his first PFL World Championship in his second PFL season and will now face Brendan Loughnane in the 2022 championship matchup. Jenkins, an NCAA Champion wrestler, boosted his career record to 19-5-0 with the victory.

“The PFL Playoffs saw world class action from New York City to PFL debuts in Cardiff and London, as the stage is now set for the biggest night in MMA,” said PFL CEO Peter Murray. “The PFL World Championship will see fighters across six weight classes compete for PFL championships and $6 million in prizes.”

“Tonight was a fitting finale to the 2022 PFL Playoffs, as our world class athletes consistently showed heart and determination,” said PFL President of Fighter Operations Ray Sefo. “Congratulations to the fighters moving on to the 2022 PFL World Championship. I am looking forward to capping off the 2022 campaign watching the best of the best square off with titles and prizes on the line.”

In her PFL debut, Dakota Ditcheva earned a first round TKO victory over Hassna Jaber. The referee stopped the contest keeping the Manchester native’s perfect 6-0 record intact. Dakota is the daughter of Lisa Howarth, a world champion in kickboxing, muay thai and karate. The victory guaranteed her spot in the 2023 PFL Europe season.

To begin the ESPN card, London native Simeon Powell matched up with Joao Paulo Fagundes in a Light Heavyweight bout. Powell remained undefeated with a victory via 2nd round TKO and now boasts a record of 7-0-0. Powell, who earned a PFL contract in the 2022 PFL Challenger Series, is now 3-0 in the PFL at just 23 years old.

Further action saw three PFL Europe Qualifying bouts with each winner earning a spot in the inaugural PFL Europe season. The first qualifying match was a Bantamweight clash between Ali Taleb and Darius Mafi. Taleb kept his undefeated streak alive at 8-0, finish ing Mafi by 1st round submission, and clinching a spot in the 2023 PFL Europe Season.

In the next PFL Europe qualifying match, Magnus Iverson defeated Tayo Odunjo via first round TKO. Iverson landed heavy punches to the body and head, earning a 2023 PFL Europe roster spot. Iverson, born in Nigeria and fighting out of Oslo, remains undefeated at 3-0.

The final PFL Europe qualifier featured Louie Sutherland and Abraham Bably in a Heavyweight matchup. Bably defeated Sutherland via unanimous decision, and earned a spot in the 2023 PFL Europe season. The London, England native improved his record to 2-0-0.

The action in London concluded with Marcin Held and Myles Price competing in a Lightweight showcase bout. Held collected the victory after a successful guillotine choke submission in the 2nd round, and improved his record to 28-9-0.

In a Lightweight division PFL showcase bout, Omar Hussein took on Alex Chizov. Chizov won the fight via 2nd round submission, executing a rear-naked choke. Nine of Chizov’s last 10 wins have come by way of finish, and his career record now sits at 10-1.

Kicking off the card on ESPN+ was a showcase bout between Zebenzui Ruiz and Raphael Uchegbu. Ruiz, the first fighter to represent Spain in the PFL, defeated Uchegbu by unanimous decision and the victory marked his 4th straight win, and moved his career record to 11-3.

The stage is set for the biggest night in MMA, the 2022 PFL World Championship, where $6 million in prize money awaits six PFL world champions. Kayla Harrison will seek her third consecutive PFL world championship in the Women’s Lightweight Division, while 2021 Heavyweight Runner-Up Ante Delija will return to the finals with his sights set on a title.

All PFL 2022 Season events are live on ESPN, ESPN2/ESPN+ and ESPN3 (Spanish), as well as on premier global distribution partner platforms reaching 160 countries around the world.

Professional Fighters League (PFL) is the fastest growing and most innovative sports league. PFL is the #2 MMA company worldwide and the only with the sports-season format where individual fighters compete in Regular Season, Playoffs, and Championship.

PFL League is primetime in the U.S. on ESPN and ESPN+ and broadcast and streamed worldwide to 160 countries with over 25 media distribution partners including Channel 4, DirecTV, RMC Sport, Eurosport, Sky Sports. PFL Challenger Series is live on FUBO TV in the U.S. The PFL fighter roster is world-class, with 25% of PFL fighters independently ranked in the top 25 in the world. The PFL proprietary SmartCage data and analytics platform powers real-time betting and provides next-gen viewing experience.