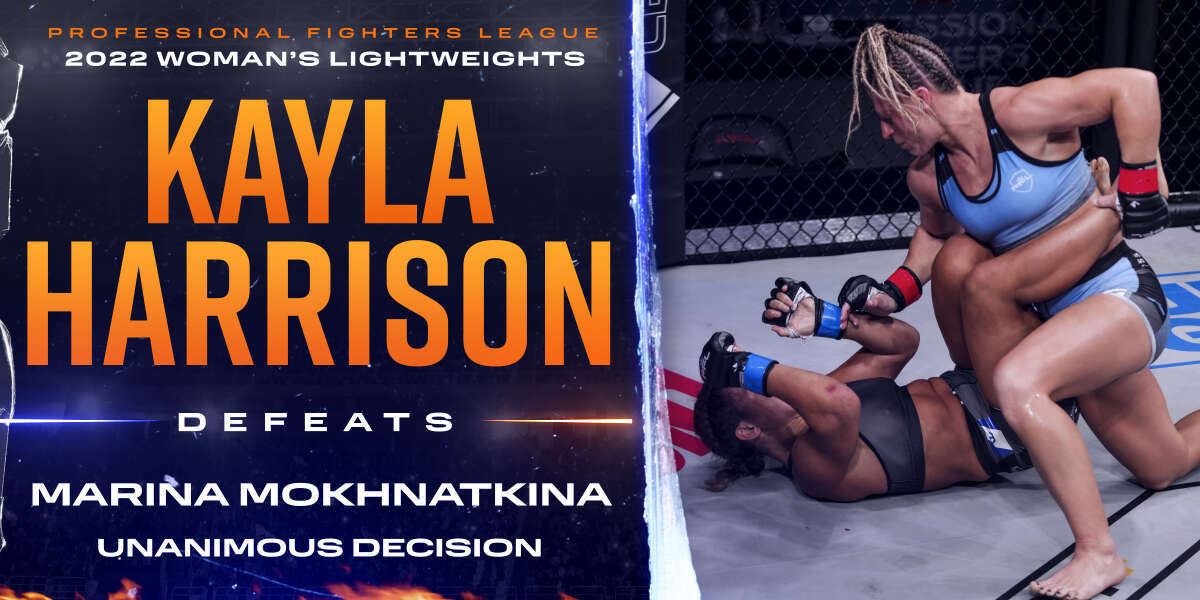 After a lengthy free agency with many suitors, Harrison returns to the SmartCage to chase her 3rd PFL title and million dollar prize. Harrison became the first U.S. athlete in history to win Olympic gold in judo in 2012 and repeated that gold medal performance in 2016. Since transitioning to MMA, Harrison is undefeated with 10 stoppages in her 12 wins. Harrison has overcome a tremendous amount of adversity to get to this point as an outspoken survivor of sexual abuse.  Harrison also lost her mother in December of 2019 and her stepfather 5 months later but remained undeterred, and with a win tonight she will officially surpass Amanda Nunes, Cris Cyborg, and Ronda Rousey for the best start to a women’s MMA career in history.

Although only 6-2 in MMA, Mokhnatkina has an extensive combat sports resume with the aforementioned 7 World Sambo championships.  Mokhnatkina earned her spot in the 2022 PFL season with a dominant win over Claudia Zamora in a showcase bout last august during the PFL Playoffs.  Not one for the easy road, Mokhnatkina wanted to fight Harrison first to prove she belongs at the highest level.

And our main event is underway! Kayla is controlling the center of the SmartCage as Marina feels her out and looks for an opening. One gets the sense Kayla is stalking her prey here just waiting for her moment and just like that Kayla throws a left, changes levels, and gets the fight to the ground.

Marina seems to be attacking an armbar but Harrison is wise to it and postures up.  Marina is able to get back to her feet but gives up her back in the process as Harrison throws a nice knee up high.

Harrison attempts an outside trip with the bodylock but Marina is able to stay on her feet, thugh she’s still in Harrison’s grasp pressed up against the cage.

Still in the clinch, Harrison starts opening up with the right hand, possibly looking to set up the takedown.  Marina rolls for the leg and attacks a knee bag but Harrison sees it coming and is able to slip out and take Marina’s back with a minute remaining in the round.

Marina is able to buck Harrison off and with 45 seconds remaining in the round they’re back to the center.  Harrison throws a high kick and exhibits her ever improving striking as she follows it up with a left and the round ends.

More of the same to start round 2 as Harrison uses a left to engage the clinch and start looking for the takedown.  Marina attempts to circle out and Harrison expertly uses her own momentum to hit a nice slam.

Most of this fight has taken place against the cage through 2 minutes in the 2nd round but Marina is doing an excellent job getting back to her feet and not letting Harrison just outmuscle her as she is wont to do.

Halfway through the round and Harrison is peppering knees and short punches in the clinch before hitting a judo toss.  Marina again rolls for the leg but can’t lock it up and Harrison opens up for some big ground and pound before settling into Marina’s guard.

Marina is keeping the butterfly in and attempting to control Harrison’s arms to prevent her from doing damage but now Harrison passes to side control and starts attacking the armbar but Marina is able to fight it off.

Harrison takes Marina’s back in the scramble and Marina smartly backs up into the cage to prevent Harrison from creating the angle for the rear-naked choke.

With 10 seconds left Marina is able to spin out and get back to her feet as the ref warns Marina not to grab the cage again.

Harrison tells ATT coach Mike Brown on the stool that Marina’s sweat is preventing her from locking anything up in the grappling exchanges.

Harrison opens round 3 with another high kick and she keeps shaking out her right hand and arm, it’s possible she picked up an injury earlier.

Marina again tries to roll and Harrison winds up on her back, frees the left hand, and gets off some big damage.  Marina wisely works her way back to the cage and uses it to get back to her feet once again.

Harrison being very patient and not over pursuing anything as she grinds Marina out along the cage.

With half a round remaining, it’s been all Harrison so far although she has not been quite as dominant as fans are accustomed to.

Harrison attempts another outside trip and Marina defends beautifully and attempts a judo throw of her own but there’s nothing there.

With a minute remaining in the round Marina breaks the clinch and circles back to the center of the SmartCage.  Harrison lands a big left in space but Marina seems unfazed.

The 10-second clapper goes off and Harrison throws another high kick, both fighters exchange some small glancing blows and that’s the fight! Marina Mokhnatkina becomes the second woman to take Kayla Harrison the distance.

Kayla Harrison returns with a clean sweep on the judges scorecards to pick up 3 points and begin her 2022 PFL campaign, but she’s still looking up in the standings at Larissa Pacheco who had the only finish in the division tonight.

Kayla Harrison goes all 3 rounds vs Marina and picks up the Unanimous Decision W!#2022PFL3 pic.twitter.com/mKm72uG7LV