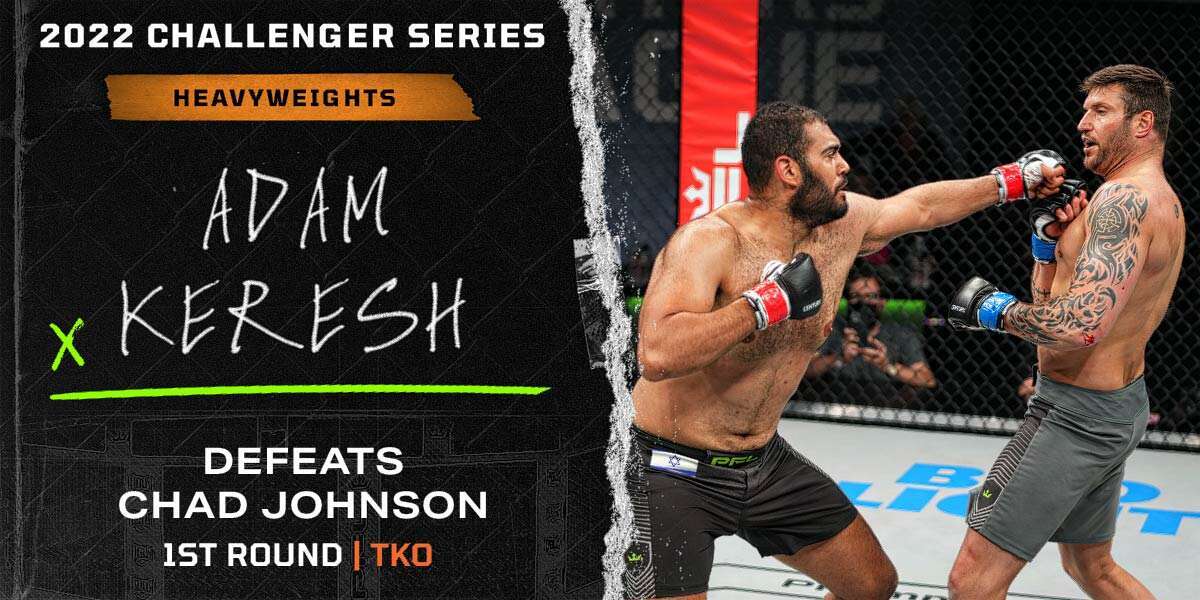 Moments after Daiqwon Buckley wiped out Jon Cunningham to kick off Week 6 of the 2022 PFL Challenger Series, Adam Keresh (4-0) and Chad Johnson (6-3) made that walk to the cage.

Both men are finishing machines. Johnson knocked out his opponent in all six of his wins, while Keresh *checks notes* knocked out all four of his opponents in four pro fights.

History would suggest somebody is getting knocked out here. Who’s it gonna be?

It’s underway, and Keresh is immediately showing off some sneaky movement. He’s dancing and spinning and looking for openings while Johnson circles and tries to find the range.

They exchange kicks. Super quick head kick from Keresh gets Johnson’s attention, and they clinch against the cage with two minutes down in the round.

Keresh showing off a wide variety of strikes here, looking incredibly graceful for a heavyweight. Johnson catches a kick and Keresh fires a spinning elbow. It’s not there.

Johnson misses with a punch and lunges for a takedown, but it’s not there. Keresh sprawls and looks to reverse the position, and Johnson gives up his back in the process.

It’s clear Keresh wants the ground-and-pound here, and he’s looking for his opening to uncork a bomb.

My goodness. One shot, and Johnson is done. He covers up in a fully defensive position, clearly done from that single shot from Keresh. That’s some serious power, ladies and gentlemen. Another fight, another win, another knockout for Keresh. He moves to 5-0.