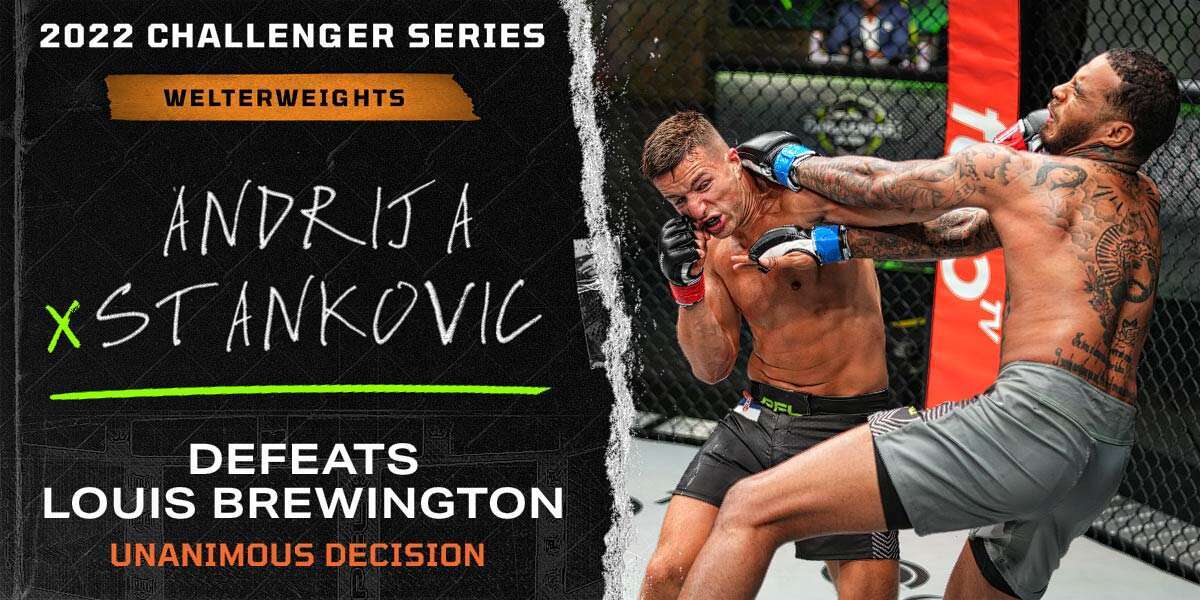 Week 7 of the 2022 PFL Challenger Series comes to a close with a Welterweight matchup between Serbian kickboxer Andrija Stankovic and Team Manu’s Louis Brewington.

While Stankovic’s kickboxing background is extensive, he’s never competed in MMA –– amateur or pro. That could play in Brewington’s favor, as he went 7-5 in his amateur MMA career.

Even more importantly, Brewington ended his amateur career on a four-fight winning streak, including a title-winning performance at NFC 135, where he submitted Emmanuel Osho via first-round guillotine to win the belt.

Will the pure kickboxing skills from Stankovic be enough to close the experience gap? We’re about to find out.

They touch gloves, and we’re underway. Stankovic is stalking early, pushing forward aggressively and keeping Brewington on his heels. High kick from Stankovic lands, and he immediately fires another. Those kicks look quick and crisp early.

Brewington slips, but Stankovic wants nothing to do with the ground game. He lets Brewington get back to his feet with no resistance and fires away a quick combination on the feet.

Stankovic opens up with the hands, and Brewington makes him pay for a little over-aggression, ducking under and getting the takedown in short order. Ten seconds left in the round, and Stankovic avoids any serious punishment by tying up and waiting for the bell.

Brewington catches the body kick from Stankovic but can’t capitalize, and now he’s looking for the takedown. Surprisingly, Stankovic reverses and settles into Brewington’s guard. After some inactivity, the referee stands them up.

Stankovic opens up on the feet, but it’s a bit of over-aggression once again, and Brewington capitalizes with another takedown. No urgency from Brewington gives Stankovic the opportunity to scramble, but that was a mistake, as Brewington moves immediately to mount in the process.

Another scramble ensues, and this time, Brewington finds the triangle as Stankovic leaves one arm dangling inside for the taking. This looks tight, but Stankovic lands some hammerfists and escapes. Great composure from him there in an uncomfortable position, and now he’s inside Brewington’s half guard.

Stankovic is happy to end the round on top here, and he lands a few shots before the bell sends us to Round 3.

Another quick start from both men. Brewington with the body kick, and Stankovic presses forward.

Left hook just misses from Stankovic, and Brewington is in on a single. Stankovic sprawls and winds up in Brewington’s half guard. Again, Stankovic looks content to burn some time here. Halfway through the round, and the referee’s seen enough, asking them to reset on the feet.

Another failed shot from Brewington, and he appears a touch fatigued with one minute left in the fight. They clinch against the cage, and Brewington sort of … pulls guard. Interesting play with just seconds to go.

This fight’s over, and it’s headed to the judges’ scorecards.

That’ll do it. The judges’ scorecards agreed, with Stankovic taking the unanimous decision. Brewington, somewhat surprisingly, wore some confusion on his face as the decision was read.