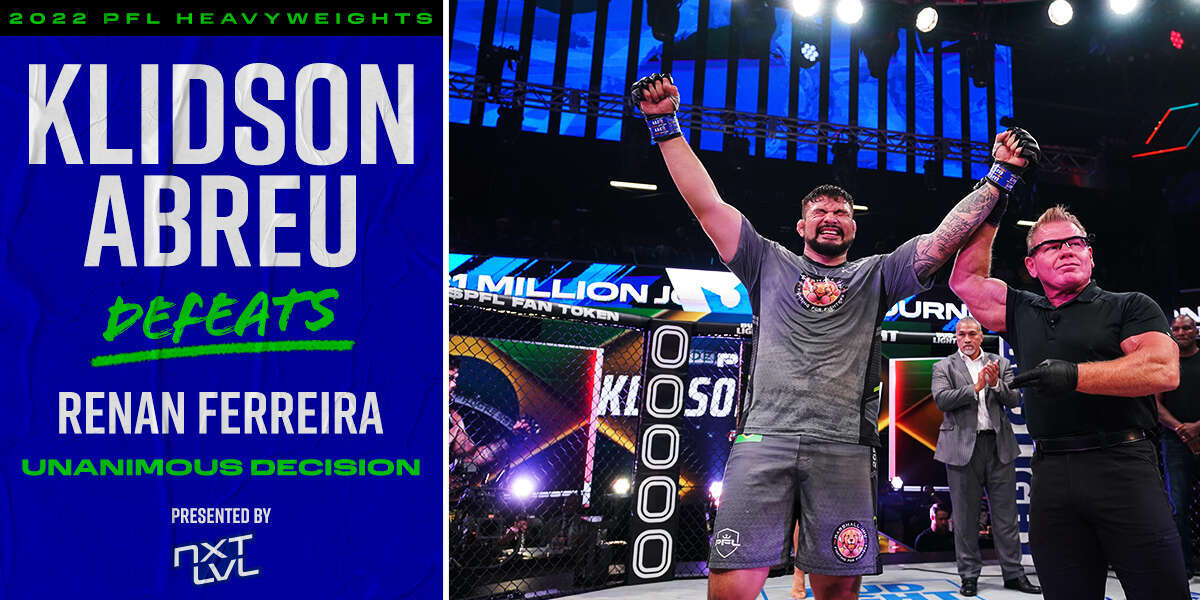 In one of our most anticipated bouts of the evening, 2 fighters coming off wins in their 1st regular season bouts clash as 6’8” behemoth Renan “Problema” Ferreira (9-2) steps into the SmartCage to take on Klidson Abreu (16-5).

“La Problema” comes into this fight with 6 points and at the top of the Heavyweight standings following a record breaking KO, taking only 25 seconds to dispatch Jamelle Jones in his first bout of the regular season.  Ferreira clinches a playoff spot with any victory.

Abreu also comes into this fight off a win, a unanimous decision over Challenger Series contract winner Adam Keresh which earned him 3 points. A former UFC fighter, Abreu will need a finish tonight in order to have a chance to make the PFL Playoffs, quite literally a tall task!

We’re underway and unfortunately it looks like Ferreira will not be breaking his own fastest finish record again tonight as both men seem a bit more measured to start.

Ferreira is probing with the kicks but has yet to land anything big as Abreu tries to figure out how to close the distance on such a massive human being.

Through 2 minutes we have under 10 total strikes thrown as both fighters feel each other out.

Smartly, Abreu clinches, changes levels, and gets the fight to the ground where he lands in top half guard.  Abreu knows he is not going to win a kickboxing match with Ferreira and is wisely trying to exploit his best path to victory.

Ferreira is trying to work to a hip and shrimp out but Abreu is staying heavy on top and not giving him any openings to exploit.

Abreu now isolates an arm and looks for the armbar but can’t break Ferreira’s grip, sliding back into side control before Ferreira is able to regain half guard with about 30 seconds remaining in the round.

Abreu continues to pepper the body and head with short strikes and winds down what is essentially a perfect round for him.

Abreu opens the round with a massive overhand left that lands on Ferreira!  This is not how the oddsmakers saw this fight going so far as the live line rapidly approaches a pick em.

Ferreira fires a high kick but Abreu is able to get out of the way and Abreu wisely uses a left hand to the body to create an opening for the takedown and again gets this fight to the mat!

Very similar position to the 1st round with Abreu heavy on top in half guard while Ferreira looks to create an escape along the fence.

Abreu briefly passes to side control but Ferreira is able to regain half guard but he’ll have to get back to his feet to avoid a repeat of round 1 as Abreu lands some big ground and pound.

Abreu briefly attacks a triangle choke but can’t lock it up as Ferreira throws some wild strikes off his back.  Abreu isn’t landing anything overwhelming damaging but these short shots are adding up as he scores points on the judges cards.

Again Abreu attacks the arm triangle but can’t quite lock it up. La Problema seems to have a problem here but finally he’s able to get his back to the fence and start building back his base. Abreu wisely controls the post leg and prevents Ferreira from getting to his feet, landing some big ground and pound in the process as the round comes to an end.

Ferreira will certainly need a finish here to win this fight and lock up his postseason spot.

Abreu seems to be a bit tired now and he still needs to respect the massive power Ferreira carries.  Abreu is walking him down and closing the distance, trying to initiate more grappling exchanges as he’s able to pummel his way inside behind some strikes and lock up a bodylock.

Ferreira briefly fights it off before getting tossed to the mat by Abreu, and I don’t think a man that big is supposed to fly like that.  After less than a minute of cage time in his last 2 fights, Ferreira finds himself in an unfamiliar situation in deep waters in the 3rd round with a 2nd degree black belt.

Abreu gets another takedown in the 3rd round! The live odds have shifted in his favor!#2022PFL5 LIVE on ESPN & ESPN+
🌎 https://t.co/jPNvomkWj8 pic.twitter.com/yrtr8C6uOK

Abreu cannot be given enough credit for his gameplan in this one, the striking was used as a means to an end to initiate grappling exchanges and get the fight to the mat which he has been able to do in all 3 rounds.

Abreu controls the arm and gets the crucifix briefly but Ferreira recovers his arm. Abreu has gotten off some big shots here and continues to just grind away Ferreira here in what is easily the most impressive performance of his career so far.