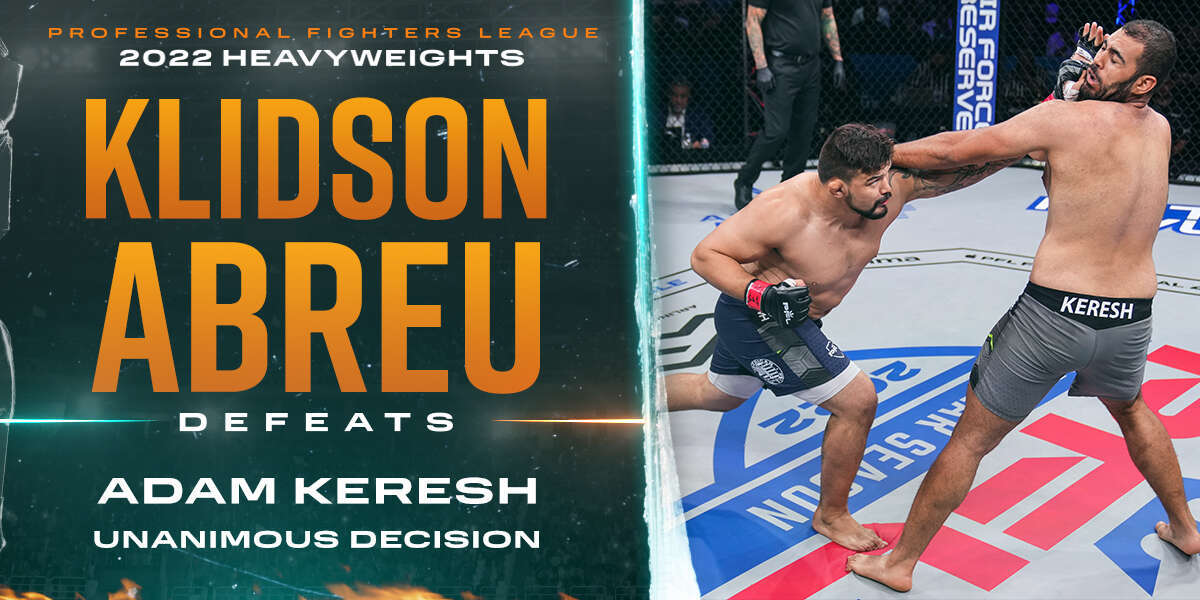 In our first heavyweight bout of the 2022 PFL Season, UFC and PFL veteran Klidson Abreu (15-5) welcomes the undefeated PFL Challenger Series contract winner Adam Keresh (5-0) to the Smartcage.  Keresh, a native of Tel Aviv, Israel, sports an impressive undefeated record with all 5 wins coming by way of knockout and 4/5 ending in the first round. Keresh amassed a 3-0 record under the Bellator banner before earning his PFL contract on the Challenger Series in week 6 when he KO’d Chad Johnson 3.5 minutes into the opening round.

Abreu comes into this fight following a loss to last year’s PFL Playoffs Semifinalist Jamelle Jones in his PFL debut. Abreu joined the PFL after amassing a 1-2 record in the UFC and has been fighting professionally since 2011. He looks to right the ship after racking up 2 losses and a no contest in his last 3 bouts.

The fight begins and Keresh comes out very unorthodox throwing a back fist out of a near karate stance.  Both men feel each other out and Abreu’s first strike is a missed high kick that lands him on the ground but he quickly gets back to his feet.

Keresh is standing almost completely perpendicularly to Abreu and showing a lot of funky elbows and similar feints.  Abreu seems to be having some trouble figuring him out and closing range.

Halfway through the round, Abreu changes levels and gets deep on a double leg.  Abreu drives Keresh across the mat and into the cage where he’s able to finish the takedown and wind up on top.

Keresh is keeping a butterfly in while Abreu attempts to pass to mount.  Abreu postures up and throws some nice ground and pound and is able to reengage the grappling with a crucifix with about 50 seconds remaining.

Abreu gets off a little bit of damage from here but all things considered, Keresh defends fairly well for being in such a poor position.  Abreu slides his knee over Keresh’s belly to take the full mount and looks for a head and arm choke but isn’t able to finish and that’ll end the round.

10-9 Abreu, very smart to get the fight to the ground and keep it there.

Round 2 begins and Keresh is back to fighting behind his kicks.  This is only Keresh’s second time leaving the first round in his pro career.

Not a lot of significant strikes in the first minute of the round but Keresh nearly lands a big head kick that Abreu’s attention.  Abreu wisely clinches again and looks for the takedown but this time Keresh is able to fight him off and get back to the center of the cage.

Keresh is using a lot of front stomps and will flip his stance when he throws that high kick, disguising it well.  Abreu seems to have a better understanding of Keresh’s movement and definitely respects his opponents striking.

With 2 minutes remaining, Keresh continues to attack stomps to the legs and feet but neither man has landed anything very significant.  As I say that, Abreu lands a nice right and uses it to initiate the clinch up against the cage.

Keresh reverses position and keeps going with the stomps and some shoulder strikes.  With about a minute remaining, the ref breaks them up and gives Keresh a stern warning for grabbing the cage, telling him if it happens again he will lose a point.

They reset in the center of the Smartcage and Abreu instantly tries to shoot on a single but Keresh fights it off perfectly.  Keresh throws a spinning backfist and is countered with a nice kick to the body that appeared to hurt him a bit.

The round ends with Keresh pressed up against the cage.  Much more competitive round and tough to score, FPR has it 22-21 Abreu.

Final round and the first 3rd round of Keresh’s career.  Abreu once again opens with a level change and gets the clinch and drives Keresh into the cage.

After a minute of hand fighting and jockeying for position, Abreu again gets the fight to the ground.  Keresh looks to sweep but needs to be careful as he briefly winds up in the crucifix again.  Abreu maintaining heavy top pressure from half guard and it would appear Keresh is hoping the ref will just stand them up.

Halfway through the round and Abreu still heavy on top in half guard, and he’s able to pass and get to mount where he starts attacking a choke.  Keresh is able to slip out the back door but he’s unable to get back to his feet as Abreu swarms him and regains top control.

Abreu is now saying Keresh is trying to bite him from the bottom? Keresh not showing the urgency you would like to see from a fighter in this position and with about 25 seconds remaining in the fight Abreu is able to posture up and deliver some damaging ground and pound to secure what very well may be a 10-8 round.

Klidson Abreu ends the 3rd round on top. This should be a clear W for Abreu.

Klidson Abreu picks up 3 points and takes his place atop the heavyweight standings with a dominant win over Keresh.