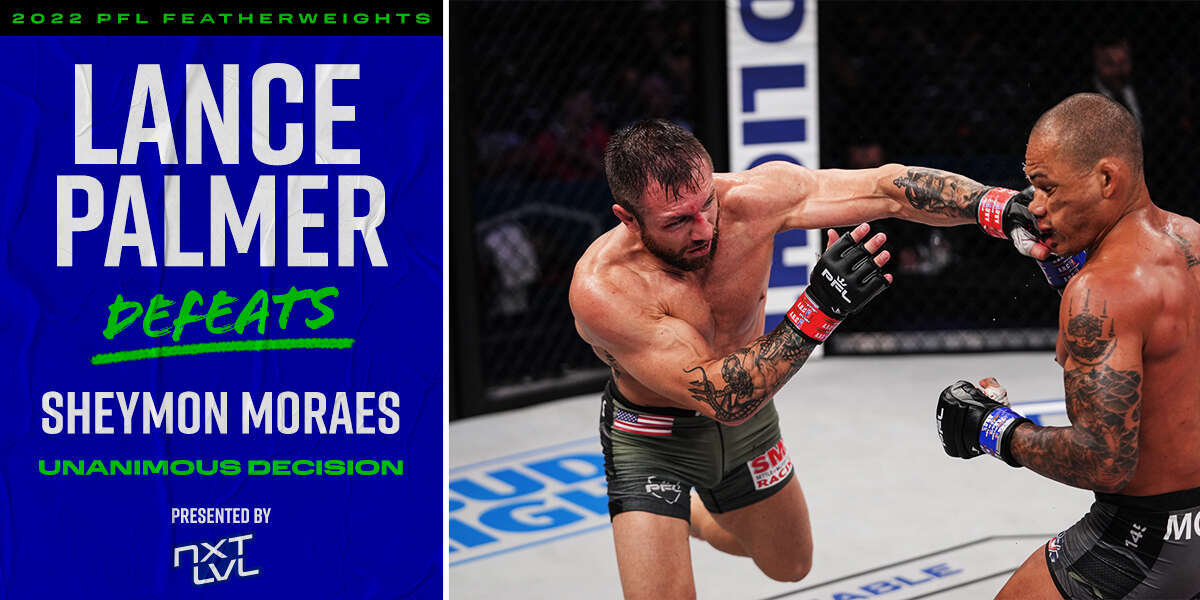 After a dominant run that saw him win 11 straight fights and 2 PFL World Championships, Lance Palmer (22-6) finds himself in unfamiliar territory as he enters this bout coming off his 3rd consecutive loss and is looking at missing the PFL Playoffs for the 2nd straight year. This bout will feature fighters trending in opposite directions as UFC vet Sheymon Moraes (14-5) rides a 3 fight winning streak into tonight, including a decision win over fellow UFC alum Boston Salmon in his 1st fight of the Regular Season.

A well credentialed wrestler, Palmer was a 4x All-American and Big-10 Champion in his college days at Ohio State. He dropped his opening bout of the season to Chris Wade and in evaluating his performance, said that his “sense of urgency just didn’t seem there”. Palmer will likely need a finish tonight to clinch a playoff spot in a crowded Featherweight division.

Moraes on the other hand has looked to be in excellent form in his last 3 bouts, earning 2 finishes and the aforementioned decision win in his opening bout of the regular season.  Incredibly, Moraes fought all of the 2021 Regular Season on a torn ACL, delaying surgery so that he could compete.  After healing up in the offseason, Moraes feels he is primed to make a deep run in the PFL Playoffs this time around.

The bell rings and we’re off.  As they feel each other out one wonders how long it will take for Palmer to shoot and try to get the fight to the mat and that question is answered quickly as Palmer shoots 30 seconds into the round and is able to drive Moraes to the mat and finish the takedown.

Palmer lands in top half guard as Moraes attempts to shrimp out and hip escape.  Moraes is doing a good job controlling Palmer’s wrist from the bottom and preventing him from getting off big damage.

Palmer is staying heavy on top here as he passes to side control and Moraes regroups. Palmer is eventually able to pass to full mount and Moraes might be in trouble here.  Moraes is almost able to hip escape and get back to his feet but Palmer recovers and regains half guard as Moraes works his way to the SmartCage and attempts to work back to his feet.

Once again Palmer briefly mounts Moraes but Moraes walks the cage, almost escaping out the back door before Palmer again winds up in top half guard.  This looks like a very different Lance Palmer than we’ve seen in his last 3 fights and conversely, Moraes hasn’t faced this much adversity early since he was knocked out by Loughnane.

Moraes is able to reguard, getting himself out of big danger as the round winds down and comes to an end.  Moraes will clearly need to keep this fight on the feet moving forward.

The 2nd round is underway and after a nice roundhouse to the body from Moraes, Palmer shoots again and again gets the fight to the ground.  This time however, Moraes is quick to get his back to the fence and start to build a base.

Moraes appears visibly frustrated as he attempts to work back to his feet, throwing small short punches off his back and something has cut Palmer open.  Moraes is finally able to get back to his feet and into the clinch where he is comfortable with his Muay Thai background.

Palmer appears a bit fatigued after all the top control and Moraes is starting to pick up steam, landing a big leg kick followed by a big body kick.

Halfway through the round Palmer is breathing heavy and Moraes is landing some big kicks, but Moraes overextends on a high kick and Palmer is able to secure a double leg takedown once again.  Moraes once again gets his back to the fence and starts building back up.  Notably, Palmer has not done a tremendous amount of damage when he has had dominant positions.

Moraes is again able to work back to his feet where Palmer presses him against the SmartCage briefly before landing another takedown. Again Moraes works his way back to his feet and the round ends in the clinch.

Moraes again opens the round with a heavy low kick before Palmer attempts a blast double.  This time however, Palmer doesn’t have the juice to get him down and Moraes is able to keep it on the feet, throwing some nice knees to the body in the clinch as they jockey for position.

Moraes breaks and circles out and he appears to have more in the tank at this point but again, Moraes overextends on a right cross and Palmer takes advantage, ducking underneath the punch and taking Moraes down once again.

Moraes attacks an armbar before settling into his full guard and throwing strikes off his back. Palmer postures up and lands a big strike but Moraes is defending well, not allowing Palmer to advance position or get off much damage and again using the fence to build a base and get back to his feet halfway through our final round.

Palmer lands a big left hand but doesn’t follow it up as he resets and again shoots and is able to secure the takedown.  With 2 minutes remaining Moraes will need to work urgently if he wants to secure himself a playoff spot.

And work he does as again gets his back to the fence but this time Moraes makes a mistake and allows Palmer to take his back where he instantly starts attacking the rear naked choke.  Moraes is attempting to get his hip to the mat to negate the submission threat and turn into Palmer and reverse position.  Palmer briefly attempts a Suloev stretch to keep the position on the back and that will take us to the end of the fight.

Lance Palmer snaps the losing streak and likely keeps Sheymon Moraes out of the playoffs.  With the Palmer win, Brendan Loughnane clinches a playoff spot.

Lance Palmer snaps a 3 fight losing streak and gets the nod over Moraes!#2022PFL5 pic.twitter.com/mplPCih9lc