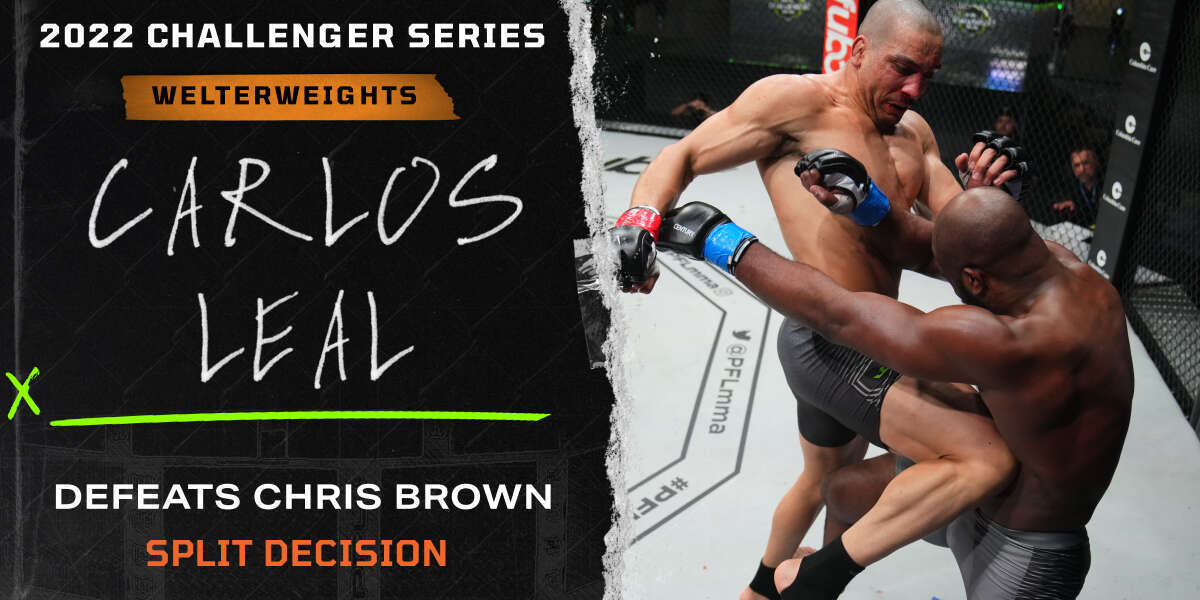 We’re off to the last fight of the evening, and either Carlos Leal and Chris Brown can seize a major opportunity right in front of them.

While three fighters –– Ali Zebian, Jeslen Mishelle, and Simeon Powell –– won earlier in the evening, all three won via decision, giving these two the chance to earn a finish and potentially steal the PFL contract in the process.

Who will get it done?

They touch gloves, and it’s showtime. Brown shows off some of his unorthodox striking early with a stomping oblique kick, backfist, and front kick all within the first 30 seconds of the fight. Now, a huge left lands.

Leal, however, remains unfazed. He looks for the takedown immediately, and he gets it, but Brown scrambles as soon as he touches the canvas and gets back to his feet.

Body kick lands from Leal, and he’s back on the clinch, pressing Brown against the cage. They separate, and Brown throws a crescent kick, followed by another oblique kick. Even if he winds up losing this one, there’s no doubt Brown’s making an impression with fans.

Unfortunately for him, Leal looks like he doesn’t care about any of this offense, and he wades forward with some huge power shots. Brown’s slowing big time with a minute and a half to go in Round 1, and Leal senses it.

He presses forward, gets the body lock again –– but Brown counters and wins up in mount. Because of course he does. Huge ground-and-pound from Brown to close the round, and there’s life once more from him as we head to Round 2.

OK, this is pure madness already. They open swinging, both men connecting with some massive shots in the process. This turned into an absolute slugfest between rounds.

Leal pressures forward, but Brown looks content to counter. Jumping switch kick from Leal glances, and Brown’s mouthpiece is out. There’s a quick pause, and they’re right back after it. Brown looks gassed again with 2:30 to go in the round, and Leal continues to stalk.

They’ve slowed a bit, but both men are still landing some big-time power shots. Leal is on an absolute mission to get the finish here, but Brown isn’t going down, nor is he slowing down with his commitment to counters.

Leal shoots, but Brown once again defends and reverses, landing briefly on top before they pop back to their feet. This fight is just insanity. Leal plods forward with punches, and Brown appears to stumble –– before instead countering with a wheel kick.

The round ends there. My goodness.

The final round is underway –– and they’re slingin’ leather again. It seems like somebody has to go down in this one, but neither man is giving an inch.

Spinning wheel kick from Brown just misses, and Leal uses the opportunity to rush in with punches before getting in on a body lock. He gets Brown to the mat … just for him to pop right back to his feet again.

Brown is a maniac in the best way inside the cage, and Leal is more than happy to join him in the dance of danger. Although Brown still looks tired, he’s there throwing kicks and punches from strange angles every step of the way.

Front kick-spinning back-kick combo from Brown now. Because that’s one thing to do, I guess. And yet, Leal’s right in it, marching forward and firing away with heavy shots of his own.

The commentators are losing their minds, and they all agree this one is going to be ridiculously tough to score. That said, the final bell sounds, and the judges have a job to do.

Let’s see who takes it.

I’m still not sure how that fight made it to the judges’ scorecards, but it did.