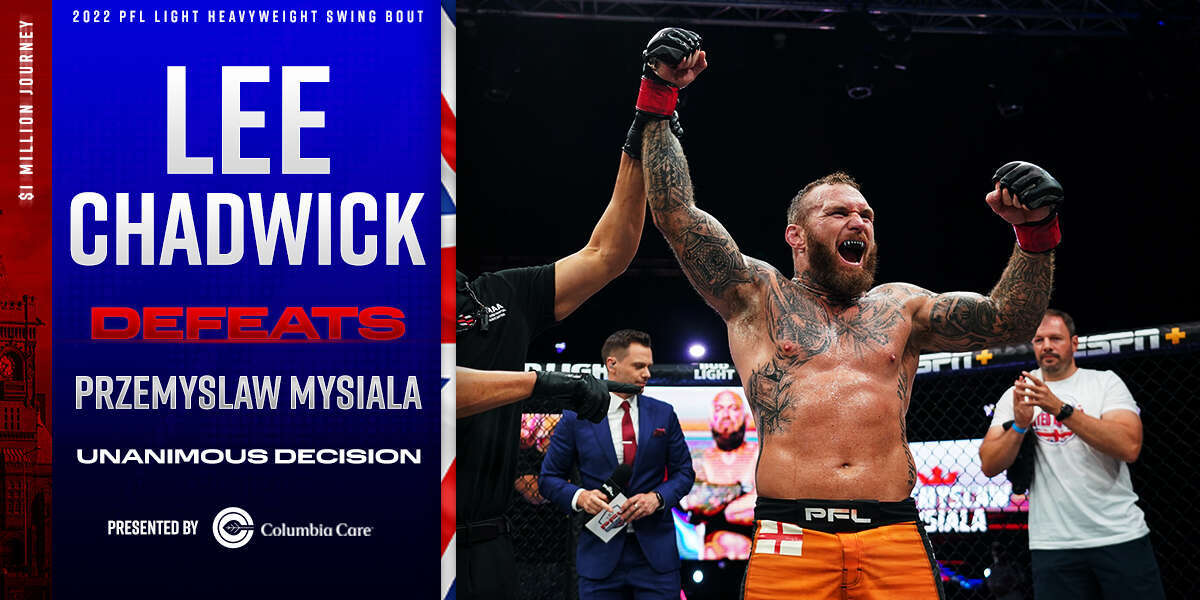 Our final bout of the evening features no shortage of experience, as former Cage Warriors Champion Lee Chadwick (27-16-1) takes on Przemyslaw Mysiala (24-11-1). A Showcase bout that features a staggering 82 professional bouts and 43 finishes between the competitors, it’s fair to assume this one will produce some fireworks!

Both fighters rush to establish control of the center of the SmartCage early as Mysiala loads up on a big spinning back fist to start before looking for and completing the takedown.

Mysiala now has the back of Chadwick and is staying heavy on top as he looks to get the hooks in and chase a finish.  Chadwick attempts to explode back to his feet and gives Mysiala the exact opportunity he wants as he gets the hooks in and rolls Chadwick over and starts hunting the rear naked choke.  Mysiala gets the second hook in and now has 3 minutes to work for a finish with dominant position.

Mysiala attempts to step over to mount but Chadwick defends well, though he can’t shake Mysiala off his back. Chadwick finally sees his opening and explodes back to his feet, using a kimura to transition well.

Chadwick senses his opening and starts unloading punches as Mysialia tries to push him away to create space.  This is turning into an all out brawl with both fighters swinging with reckless abandon and little concern for defense. Both fighters land a check hook and Chadwick is talking and smiling now, seemingly having fun in the SmartCage.

The round comes to an end after a wild closing 90 seconds that saw both men land big but Chadwick get the better of the exchange.  It’ll be interesting to see if these behemoths can keep this pace for 15 minutes.

The fighters touch gloves and the 2nd round is officially underway.  Mysiala seems to be more labored in his movement than he was in the first and one wonders how much energy he expended in those grappling exchanges.

Chadwick lands a nice right hook that gets Mysiala’s attention before they reset and Mysialia lands a nice left hook of his own. Mysiala looks to throw a right hand but was too slow to the punch and Chadwick perfectly times up the entry on a double leg, finishing the takedown with very little resistance.

Chadwick is now heavy on top in half guard posturing up and raining down the ground and pound.  Briefly, Chadwick disengages and looks to pass or for a good opening to strike but he can’t find it and dives back into the guard of Mysiala.

It appears Chadwick is trying to setup an arm triangle but the cage may prevent him from getting the proper angle to finish as Mysiala gets a foot on Chadwick’s hip and attempts to push off and create some space.  Chadwick instead uses this to pass back to half guard and continue doing damage.

Once again Chadwick is attacking the arm triangle but the fence is going to prevent him from passing off to the opposite side and tightening the choke.   Mysiala finally sees an opening and uses what energy he has left to pop back to the feet where he eats a nasty short uppercut from Chadwick as the round nears its end. Chadwick stalks Mysiala briefly before the round ends.

Our final round of the evening is underway and Mysiala seems to have caught a bit of a second wind, but we shall see how long it lasts as Chadwick is putting the pressure on and walking him down.

Mysiala shoots and briefly finds himself in a guillotine but pops his head out to establish top position. Chadwick briefly appeared in some trouble as Mysiala landed some heavy shots to the body but he’s able to create enough space to get back to his feet where he seems to have had the advantage all night.

Both men seem exhausted at this point as this is becoming a war of attrition.  Mysiala attacks a kimura but can’t finish, slipping to his back before popping back up and reengaging.

Chadwick lands a big 3-4 combo that seems to briefly stun Mysiala and he’s on the attack now, unloading a flurry of punches and dropping Mysiala with a left hook! Mysiala quickly recovers but he’s clearly still hurt bad as Chadwick lands another big right hand over the top.  Mysiala seems content to go out on his shield here as he’s still swinging big despite being hurt quite badly!

Mysiala nicely times up a double leg takedown as Chadwick looks for an uppercut but he only has 30 seconds to make something happen here.  Mysiala is getting off some ground and pound but there doesn’t seem to be much juice on his punches as Chadwick gets back to his feet and they finish the fight striking in the clinch.

Lee Chadwick wins a grueling war of attrition behind some excellent defensive grappling and massive strikes!