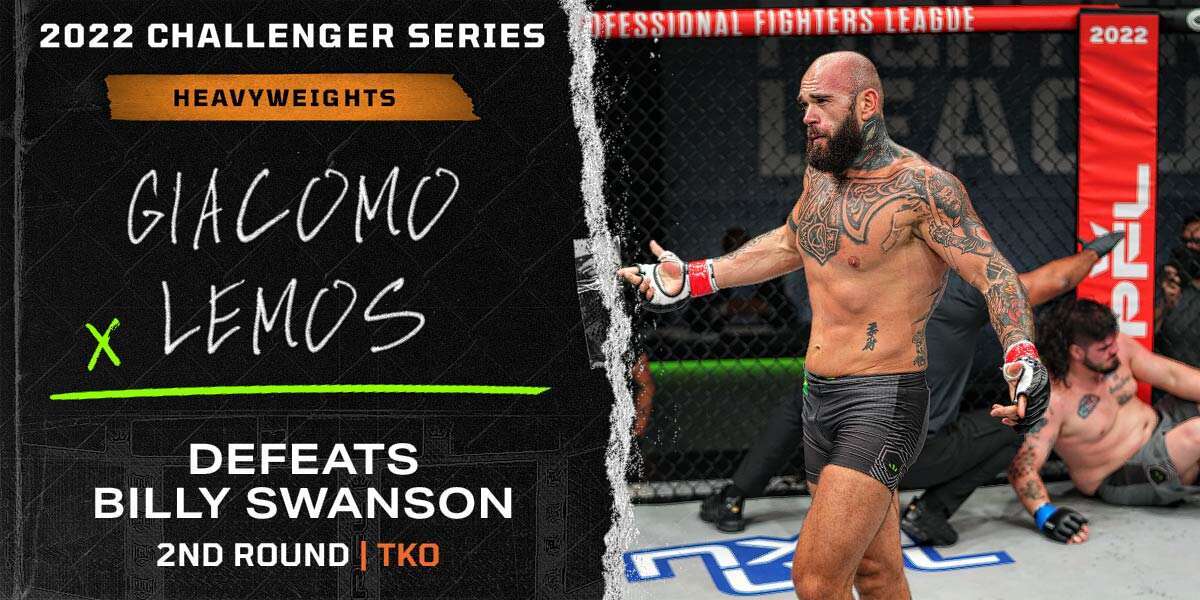 Week 6 of the 2022 PFL Challenger Series brought heavyweights center stage, which can only mean one thing: Knockouts. All the knockouts.

And through two fights? Yep. Two finishes. No fight’s seen the third round, and with Giacomo Lemos vs. Billy Swanson up next, that probably won’t change.

You see where this is (probably) going. Here’s what happened when the cage door closed.

They’re wasting no time here. Lemos with a nice front kick, followed by some quick hands. Swanson clinches immediately and they’re pressed against the cage.

Lemos reverses position, bullying Swanson against the cage here with a minute gone. Some knees to the thighs here –– and one goes low. Swanson is in major pain here, and there’s a break in the action to give him his time to recover.

Swanson takes his time, clearly feeling that low blow. But he’s OK, and we’re back up. They exchange on the feet, and Swanson looks for the takedown, briefly getting it before Lemos pops back to his feet.

This time, it’s Swanson landing low with the knee, and Lemos is down. Wow. That’s not how you want to see this fight begin.

OK, they’re back up (again) and we have a fight. Once again, Swanson pushes forward and initiates the clinch.

One minute left in the fight, and this largely has been a positional clinchfest, which would seem to favor the heavier Swanson (265 pounds). Lemos looks for a throw here, but it’s a beautiful counter from Swanson that gets the job done with 25 seconds to go. He lands directly in side control and is looking for a submission, but it’s not there.

Lemos out aggressively here, opening up with the hands. Swanson doesn’t seem to enjoy this too much. He’s backpedaling, and Lemos just powers forward, firing combinations at will.

A left hand sneaks through and drops Swanson, and this one is a wrap almost immediately. The referee’s seen enough.

3RD FINISH OF THE NIGHT! Giacomo Lemos gets the TKO in the 2nd round!#PFLonFuboTV LIVE NOW
🇺🇸 https://t.co/OS8jffgFqv
🌍 https://t.co/StPf5kcxnW pic.twitter.com/pYTATZAP9k