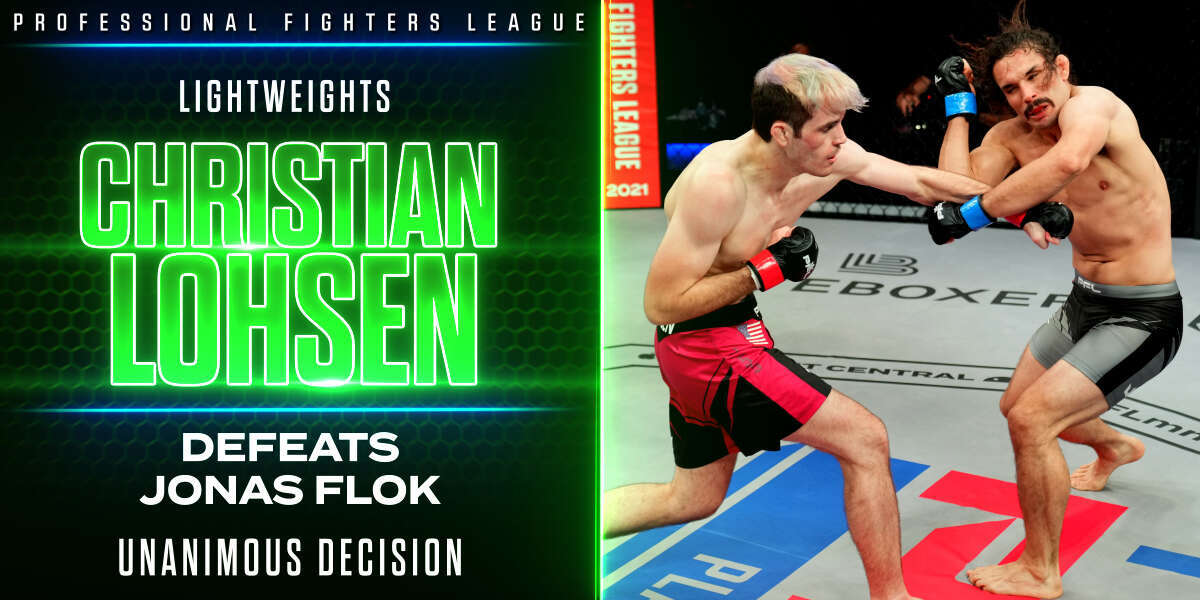 The August 19 PFL Playoffs fight card kicked off on ESPN+ with a lightweight showdown between Christian Lohsen and Jonas Flok.

A non-Playoffs affair, Lohsen and Flok fought for nothing but pride and experience –– and the crowd at the Seminole Hard Rock Hotel & Casino in Hollywood, Fla., certainly appreciated their efforts.

Here’s what went down.

Lohsen opens the action with a high kick, and Flok ducks under, firing back with a 1-2 of his own. Another kick from Lohsen, followed by a straight left, but neither finds the mark, and Flok punishes him with a solid counter.

Quick grappling exchange as Flok counters a takedown attempt. In the end, they’re back to their feet, striking it out inside the PFL Smart Cage. Now Flok clinches and looks to elevate with the body lock, but Lohsen shows off impressive balance and avoids the takedown.

Strong body kick from Lohsen lands, and it’s clear he’s looking for any and all kicks. Lohsen with the takedown now, right into a spladle. What a wild finish this would be … but he lets go and takes Flok’s back instead. A minute and a half left, and Lohsen’s going to work from the back.

Flok explodes and initiates a scramble, but Lohsen adjusts well and re-takes the back. Seconds left in the round, and Lohsen switches to a kimura, but nothing’s there. We’re onto Round 2.

Flok opens Round 2 with a series of low leg kicks. Lohsen feints, trying to get Flok to react. They clinch briefly but quickly return to the center of the cage to test each other’s stand-up. Lohsen looks for a question mark kick, but it’s blocked.

Flok looks a little confused here, opting to stand on the outside and react vs. initiating his game. Lohsen’s range and kicks in particular seem to be a problem for him here midway through Round 2.

Naked leg kick from Flok is met with a strong counter right from Lohsen. Now Lohsen ducks under for a takedown, and Flok looks for the guillotine, but Lohsen quickly passes, leg drags, and establishes top position from half guard.

Some insane grappling exchanges close out the round, with Flok searching for an arm-in guillotine, only for Lohsen to scramble, adjust, and look for an omoplata briefly. Flok rolls out nicely and ends the round with strikes. That got the announcers hyped.

Flok comes out with a low kick-high kick combo, looking to get Lohsen’s attention. Commentator/analyst Randy Couture says he has the fight one round apiece, and it’s tough to argue. This one could be going either way.

Now, Flok’s turning to thigh punches, as he lands a series without Lohsen offering any counter. Flok looks for the high kick, but Lohsen walks through it and catches the leg, taking Flok to the mat. He works briefly from Flok’s guard before passing to mount. Flok rolls out, and Lohsen takes the back for a moment before Flok again scrambles, giving up mount once again.

Lohsen’s on a triangle, which he switches to an armbar, and it looks close. Flok scrambles beautifully, turning back into his opponent and avoiding the submission. He’s on top with a minute and a half to work. What a sequence. These two came to put on a show.

Lohsen looks for the heel hook, which Flok counters with a toe hold of his own, but Lohsen escapes, and now he’s back on top. Madness.

Lohsen takes Flok’s back with 25 seconds to go in the fight. Flok, refusing to yield, lands a series of punches while Lohsen looks for the rear-naked.

It’s not there. The bell sounds, and we go to the judges’ scorecards. What a fight.

That’s how you open up a fight card. Lohsen and Flok put on a grappling clinic, offering nonstop action for fight fans in Florida and across the globe.

In the end, the judges turned in their scorecards, and they all saw it the same: Two rounds to three for your winner by unanimous decision, Christian Lohsen.