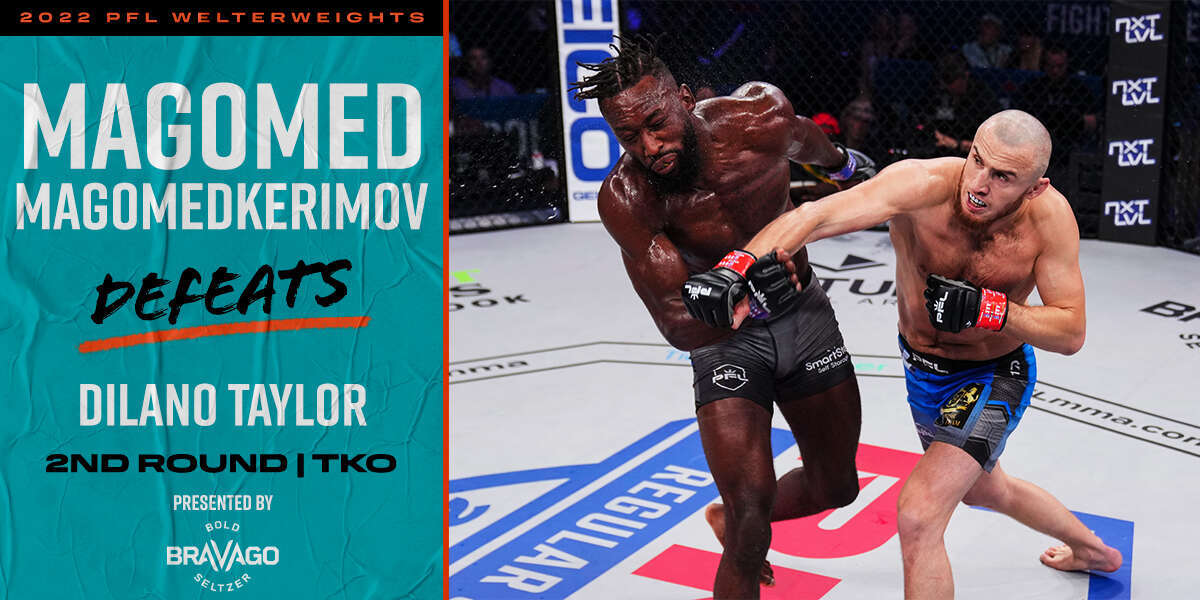 Magomed Magomedkerimov Makes His Return to the PFL in Style, Stopping Dilano Taylor in the 2nd Round

After being forced out of his 1st bout of the season because of visa issues, 2018 PFL World Champion Magomed Magomedkerimov (28-6) will have 1 chance to punch his ticket to the PFL Playoffs against short notice replacement Dilano Taylor (9-1).

The 2021 PFL Welterweight Championship between Magomedkerimov and Ray Cooper III saw Magomedkerimov lose his first fight in 6.5 years and 14 fights. Now, “Maga” finds himself in the unfamiliar position of fighting off a loss as he looks to finish Taylor early to keep his shot at a PFL World Championship alive. It should be noted that while he was not coming off a loss, Maga faced a similar situation last season, entering his 2nd regular season bout with -1 points after missing weight in his first bout of the regular season.  In that bout, Maga earned a 1st round finish to clinch a Playoff spot. He’ll need more of that tonight!

No slouch in his own right, “The Postman” Dilano Taylor carries an 8 fight winning streak into the SmartCage tonight, including a win in his PFL debut and 1st round TKO to earn a contract on the Challenger Series in February. Ironically, Taylor, an alternate for the 2022 PFL Regular Season, replaced Magomedkerimov in what was supposed to be his 1st bout of the 2022 season.  Taylor went on to defeat Joao Zeferino, earning himself 3 points before replacing Zeferino tonight as he looks to clinch a Playoff spot.

We’re once again underway and the desk notes that with a 1st or 2nd round finish, Maga can eliminate Ray Cooper III from Playoff contention.

Lots of feeling out early as there once again seems to be mutual respect for the power both fighters possess as Maga lands a nice roundhouse to the body of Taylor.

Maga is probing with his lead hand looking to set up the big right over the top but Taylor isn’t biting so far as Taylor lands a clean straight to the body.  With 2 minutes gone Maga fires a double jab and just misses on a big cross behind it, he clearly wants to land that big right and get out of here in a hurry.

Taylor is being measured and careful here as he deflects a big high kick from Maga as Maga closes distance and changes levels but Taylor fights it off without much effort.

With 2 minutes to go in the round, Taylor seems to be settling in and getting a bit more comfortable and Maga lands to the groin but Taylor elects to keep fighting.  Maga beautifully uses his jab to set up a level change and get the fight to the mat with 90 seconds to work. Maga is peppering the body now as he postures up and looks for some big damage but Taylor is defending well so far as Maga breaks and Taylor fires upkicks at the legs and body, preventing Maga from getting back on top.

Taylor briefly uses those upkicks to create enough space before Maga hits a perfect Uchi Mata throw and takes the fight right back to the mat where the round will end.

The 2nd round begins and Maga will need to show some urgency as he needs a finish in this round to keep his Playoff hopes alive. Taylor takes the center of the SmartCage and seems to have turned up the aggression a little, perhaps recognizing his best chance against Maga is leading the dance and throwing 1st.

Taylor again lands a nice right to the body and Maga lands a big right hand right after.  Maga is deceptively fast for such a large fighter and seems to be catching Taylor off guard when he explodes.

Taylor throws a low kick and Maga counters perfectly with a right hand over the top but Taylor is undeterred, continuing to march forward behind his jab and low kicks. Halfway through the round Maga lands a big right that staggers Taylor and he smells blood in the water, closing distance and keeping the pressure on as he walks Taylor into the fence and continues to throw and land that big right hand!

Maga keeps the pressure on and despite a tremendous showing from Taylor and his chin, the ref decides he’s seen enough after another big right hand lands and we have a stoppage on the feet! That’s 5 points for Maga and he will officially eliminate Ray Cooper III from Playoff contention.

Magomedkerimov gets the STOPPAGE!