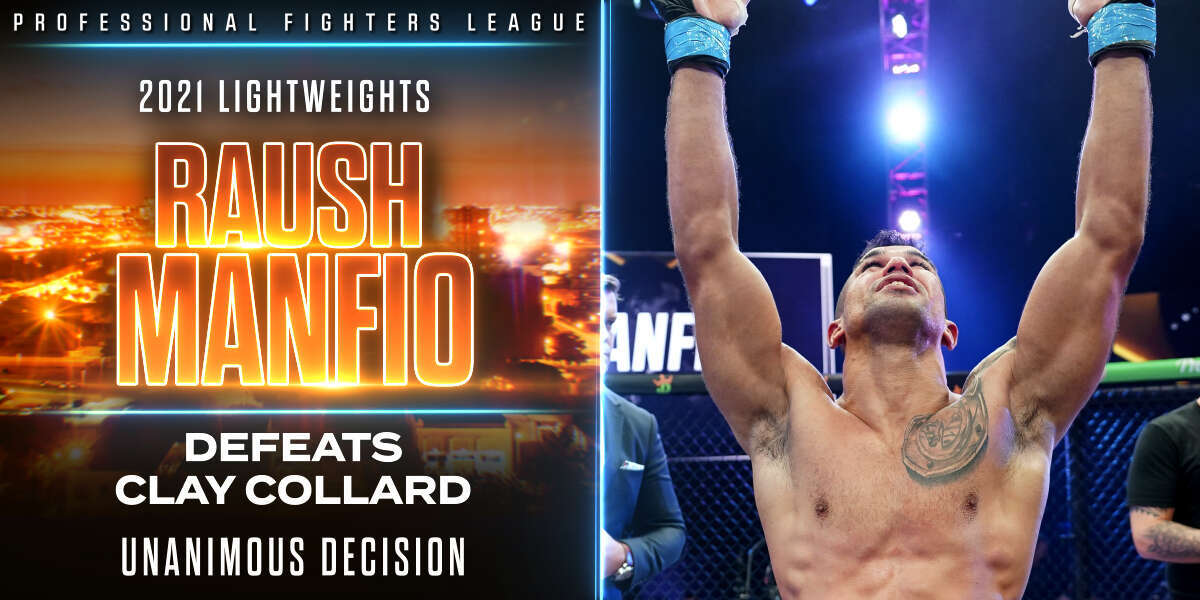 Lightweights took the spotlight on the PFL Playoffs 1, 2021 fight card Friday evening in Hollywood, Fla., as No. 2 seed Clay Collard took on No. 3 seed Raush Manfio on ESPN2.

With Loik Radzhabov earning a spot in the PFL World Championships one fight before Collard and Manfio squared off, the stage was set for one man to secure that final spot to compete for the $1 million prize.

Who rose to the occasion and seized the opportunity to fight Radzhabov in the PFL Lightweight Finals?

They touch gloves, and Manfio takes the center of the cage. Collard pumps a jab and throws a low leg kick which Manfio counters beautifully.

Collard gets back on the jab and works the body, moving his head nicely to avoid Manfio’s counters. Manfio explodes with a flying knee that just misses the mark, and Collard is right back on top of him, pushing the pace.

Thus far, Collard appears to be the one controlling the distance and the pace, while Manfio looks content to counter and look for the bigger, more explosive shots. That said, Collard connects with a powerful straight right that sends Manfio backward.

He pursues the finish, the Manfio recovers nicely, and they return to the center of the cage to trade strikes until the bell sounds, signifying the end of Round 1.

They come out quickly for Round 2, and Collard eats a strong shot from Manfio early. Collard hangs in the pocket and returns fire, though, connecting with a solid series of punches of his own. After the early onslaught, the two fighters settle down and return to range with four minutes left in the frame.

Collard’s looking comfortable here, cutting angles nicely and landing his shots while staying out of range from Manfio’s counters. Manfio catches a kick, and Collard rolls out of it, posing against the cage for a photo opp –– but Manfio pounces with a flying knee, nearly catching Collard in the process.

They clinch, and Collard lands a series of powerful body shots. Manfio drops to the mat as he attempts a knee, and Collard takes the back, looking for the rear-naked choke. It’s not there, though, and Manfio escapes. They return to their feet to exchange a few more blows before Round 2 concludes.

Did Collard take the round with the Submission attempt at end of the 2nd? We go to round 3!#PFLPlayoffs LIVE NOW
🇺🇸 ESPN+ & ESPN2
🌍 https://t.co/WfOt9XBfzk pic.twitter.com/Vloe64BhYY

Both men look a bit more tentative here in Round 3, content to feel each other out and look for their opening. Manfio finds it, cracking Collard with a massive right hand. Somehow, he eats it without flinching, but it gets his attention as they return to the center of the cage.

Manfio in on an anaconda choke attempt, but he lets go, cracking Collard with a right hand on the break. They return to the feet and swing away, ending the fight with a scramble that sees Collard searching for a kimura while Manfio peppers away with shots from the top.

The Fighter Performance Rating (PFR) gives Round 1 and Round 2 to Collard, with Manfio taking Round 3, as does the Verdict Global Scorecard.

We go to the judges for the official decision.

No easy decision here, as Collard landed with more volume but Manfio scored with more power.

In the end, the judges saw it for the No. 3 seed Manfio, setting up a No. 1 vs. No. 3 showdown against Radzhabov in the 2021 PFL World Championship.

While PFR and the PFL commentators sitting cageside expected Collard to take the decision, it’s Manfio moving on with the chance to secure the $1 million prize.