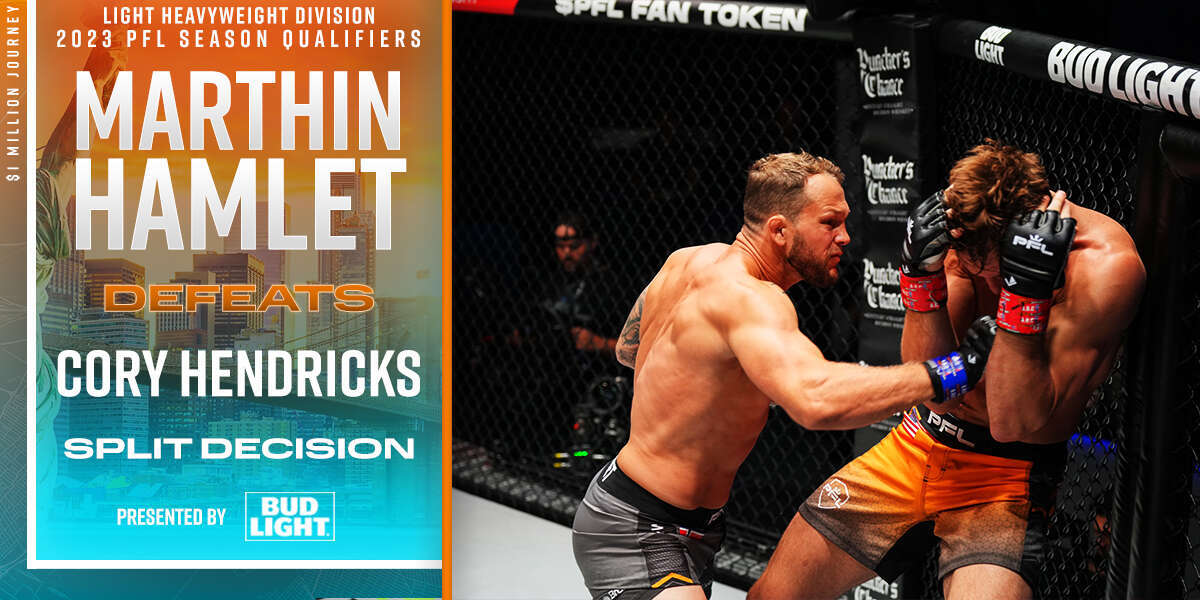 It’s the 2022 PFL Playoffs and it all starts right now!  Opening up the ESPN+ Card, Cory Hendricks (9-4) takes on 2021 Runner Up Marthin Hamlet (9-4). The winner of this bout will secure their spot in the PFL Regular Season in 2023, whereas the loser will be released from the promotion. It’s high stakes all night long here at the world’s most famous arena, Madison Square Garden, in the heart of New York City!

Hendricks began the 2022 season as an alternate following a 1-1 2021 Regular Season campaign. After finishing 2019 Champion Emiliano Sordi in April of this year, Hendricks was not awarded a 2nd Regular Season bout. He was very vocal about his displeasure not being booked for that bout, but now, he’s been rewarded with a direct path to competing in the 2023 PFL Regular Season.

Standing in Hendricks’ way will be Marthin Hamlet who finished as the Runner Up to Shoeface in last year’s Light Heavyweight World Championship. A well credentialed grappler, Hamlet is a 7 time Norwegian wrestling champion. After an up and down Regular Season that featured a win over Teodoras Aukstuolis followed by suffering a devastating TKO at the hands of Josh Silveira, Hamlet finds himself on the chopping block and in need of a win to keep his dream of becoming a PFL World Champion alive.

The fighters touch gloves and we’re off! Hamlet opens with a front kick to the body that Hendricks quickly returns with a body kick of his own.

Hamlet might be in trouble here early as Hendricks lands a couple of big hooks on the way in. Hamlet however is able to recover and get the fight to the mat before Hendricks sweeps back to top position. A scramble ensues and the fighters are back on their fight with Hamlet controlling Hendricks against the cage with double underhooks.

Hendricks attempts to break but is quickly shut down as Hamlet continues to grind on him against the cage. Halfway through the round and they’ve slowed down a bit after a frantic start, Hendricks continues to look to create space and strike but Hamlet won’t release the underhook and disengage.

Hamlet continues to maintain position but he’s going to need to do some damage if he wants to secure his spot in the 2023 PFL Regular Season. Hamlet secures the 2nd underhook and locks his hands but Hendricks is staying sturdy and not allowing himself to be taken down as the crowd voices their displeasure early.

Hendricks Is finally able to get off the cage and land a nice knee to the body before Hamlet presses forward and back against the SmartCage.

With 10 seconds remaining, Hamlet breaks and fires a big uppercut that just misses and that’s the round.

Round 2 begins with Hendricks landing a nice kick before getting hit hard and turtling up briefly as Hamlet swarms, but he weathers the storm. They reengage and Hamlet is able to secure the takedown and pass to side control where he remains heavy on top as Hendricks attempts to walk the wall and reverse position.

Hamlet appears to be attacking an arm triangle as he passes to half guard and starts trying to work his way to the opposite side of the choke. Hamlet is staying busier on top this round, peppering short little punches as he looks for the opening for a submission.

After some jockeying for position, Hendricks attempts to hip escape but can’t get back to his feet as Hamlet applies heavy top pressure. Hendricks is however able to recover full guard and mitigate some of the danger, but only briefly as Hamlet continues to work to improve position and eventually gets back to half guard.

With a minute remaining this round has been all Hamlet as Hendricks attempts a sweep with the whizzer but gets shut down once again. The round comes to an end with Hamlet maintaining top control for the majority of it.

A pivotal 3rd round begins with Hendricks barely missing a big high kick, the sense of urgency from him is clear. After a brief striking exchange where neither fighter landed anything significant, Hamlet shoots again and secures the double underhooks before driving Hendricks back into the SmartCage.

Hamlet cuts off the cage well but Hendricks gets his opening and explodes back to his feet, but he can’t shake Hamlet completely as the fighters clinch again. After some jockeying for position, Hamlet takes the back and drags Hendricks down to the mat once again.

Hamlet gets a little overzealous trying to take the back and Hendricks is able to slip out the back door and back to his feet once again, but Hamlet is just glued to him and not giving him any space to strike. Hamlet takes the back once again and Hendricks starts attacking a kimura to create space, eventually getting that space and firing an uppercut up the middle.

Hendricks executes a beautiful sweep and starts unloading on Hamlet, this is easily Hendricks biggest moment of the fight as he starts dropping heavy ground and pound, stunning Hamlet before the final bell rings. One would assume with another 20 seconds to work Hendricks would have finished there.

Marthin Hamlet gets the split decision win and earns his spot in next year’s regular season!