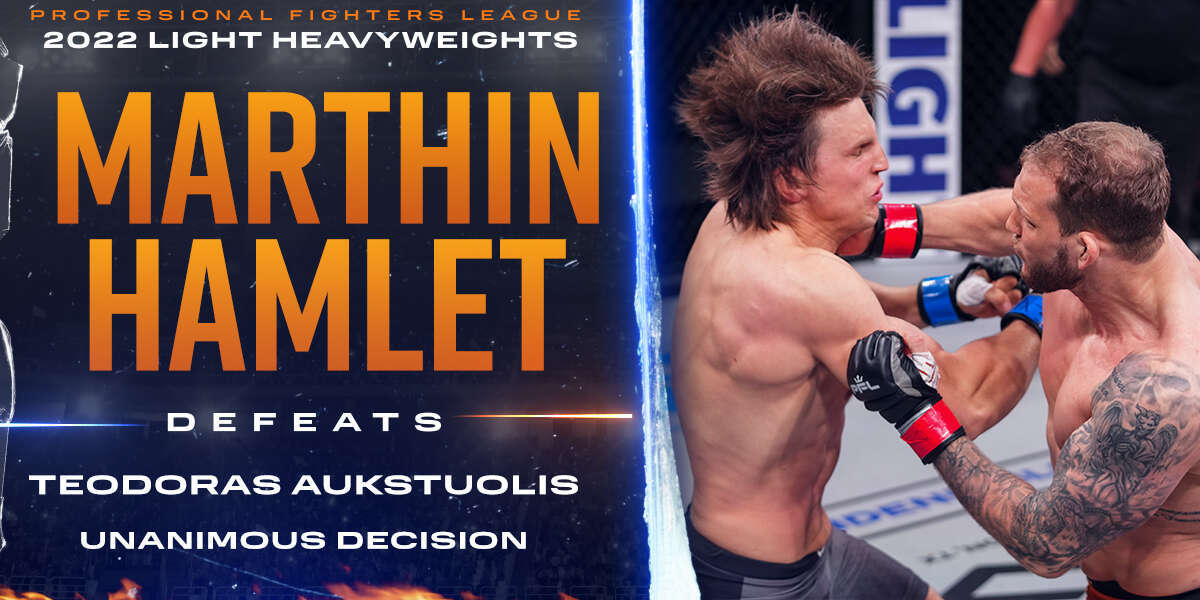 Marthin Hamlet wrestles his way to a dominant victory

Time for our first look at 2021 Light Heavyweight Runner Up Marthin Hamlet who has spent most of this offseason working with nutritionists and trainers to hone his body as best he can.  Hamlet takes on PFL newcomer Teodoras Aukstuolis.  This will be Auksuolis’ first MMA competition in 4 years, but he has stayed busy competing in combat sambo during that time

Wasting no time, Hamlet comes out and lands a big right and then engages a bodylock.  Hamlet hits a gorgeous sacrifice throw and winds up on top in the closed guard of Aukstuolis.  Auksuolis is doing a good job controlling Hamlet’s right hand and preventing Hamlet from getting big damage off, but he also isn’t doing much to get back to his feet or advance position.

Hamlet wisely cuts off the cage and slowly scoots Aukstuolis into open space as he grinds his hand and forearm into Aukstuolis’ face to disrupt the breathing.

With 2 minutes left in the round, Aukstuolis’ strategy pays off and the ref stands them up. Hamlet will have to be more active if he wants to keep these positions.

No matter though, Hamlet wins a quick striking exchange and instantly gets the fight back to the mat.  Aukstuolis is leaking now, I believe an elbow from Hamlet sliced him open next to his left eye.  Hamlet uses head position and posture to keep Aukstuolis where he is and the round concludes with Hamlet getting off some small ground and pound.

Very likely a 10-8 first round for the Norweigian.

Right off the rip, Hamlet comes out swinging and lands with a big hook.  It’s noticeable how much better a job Hamlet is doing using his striking to get to his dominant wrestling, there have been no naked shots in this fight so far, everything is being set up very well.

Speaking of setting it up well, 1 minute in Hamlet gets the fight back to the ground again and is grinding Aukstuolis out with heavy side control.  Hamlet passes to full mount with little resistance and a full 3 minutes to work and this might be all she wrote for Aukstuolis.

Hamlet appears to be setting up an arm triangle but Aukstuolis is able to shrimp to his hips and recover half guard and mitigate some of the danger.  Both men appear content to catch their breath for a second until Hamlet again starts working to pass back to full mount.

Aukstuolis successfully fights off the pass for a few seconds but Hamlet once again passes to mount.  Aukstuolis is attempting to control Hamlet’s wrist and prevent big damage, but that was another dominant round for Marthin.  You’d like to see a little bit more damage from Hamlet, especially in that last 30 seconds with such a dominant position, but he’s fighting smart and doing what he needs to do to win the fight.

We begin our final stanza and Aukstuolis actually lands a nice quick right straight, easily his most effective strike of the fight so far.  Hamlet has a little more trouble getting inside this time around and might be slowing down a little as the fight progresses, but nevertheless, he’s able to hit the single and get the fight down to the mat.

Hamlet once again applies heavy top pressure and tries to drag Aukstuolis into open space and away from the cage.  He’s peppering little strikes but nothing particularly damaging.  With 2:45 to go in the 3rd round, the ref decides he’s seen enough and stands them up again.  The lack of activity is really the only thing hurting Hamlet at this point.

As soon as they get up, Hamlet again feints the overhand right and initiates a clinch exchange.  Aukstuolis fights it off fairly well for a few seconds, but Hamlet doesn’t relent and eventually just powers him down to the mat.

Hamlet attempts to get the crucifix, but is unable to secure Aukstuolis’ arm and settles for heavy side control.  Aukstuolis attempts to walk the cage but doesn’t seem to have the juice to get off his back at this point.  Hamlet hears the 10-second bell, postures up, but still doesn’t really throw anything.

No question who won this one, but Hamlet will have to do more damage with his wrestling if he wants to stay competitive in a division full of finishers.

It may not have been pretty, but that’s a dominant win for Marthin Hamlet as he looks to set himself up for another run at Light Heavyweight gold and a million bucks.

We go to the judges scorecards for the first time tonight!