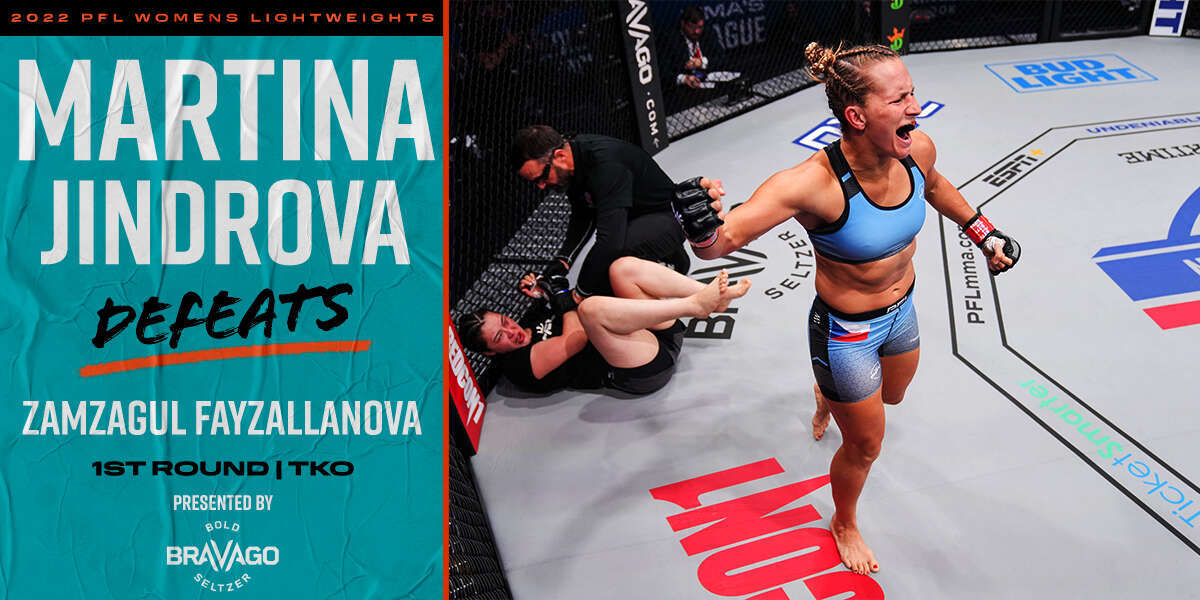 Martina Jindrova Dominates and Clinches Her Spot in the PFL Playoffs

In our 2nd bout of the evening, former World Champion kickboxer Martina Jindrova (5-2) puts her 2 fight win streak on the line against Zamzagul Fayzallanova (7-2-1). Coming off opposite results in their respective first bouts of the season, Jindrova looks to clinch a playoff spot with any finish while Fayzallanova will need an early finish to have any hope of making the Playoffs.

Jindrova earned her spot in the PFL Regular Season with a hard fought decision on the PFL Challenger Series in March, earning the celebrity panel vote and the tiebreaker vote from Ray Sefo. An extremely credentialed striker, Jindrova has won multiple European championships in Karate, Kickboxing, and Muay Thai.

On the other side of the SmartCage, Fayzallanova fell to Larissa Pacheho in her PFL debut.  She was knocked out in just 1:25, good for the 3rd fastest finish in PFL Women’s Lightweight history. Fayzallanova describes the loss as “a trial and a lesson” and hopes she has learned enough to right the ship in this bout and keep her playoff hopes alive. A 5 time medalist and 2 time Kazakh national Judo champion, Fayzallanova hopes she’ll have a chance to better showcase her skill tonight.

The fight begins and Fayzallanova has 1:30 to finish the fight and guarantee herself a playoff spot, though she will not necessarily be eliminated if she cannot finish in that time.

A lot of feeling out through the 1st minute as Jindrova looks to establish her striking without clinching with the Judo champion.

Jindrova lands a nice high kick that seems to stagger Fayzallanova as she begins to really establish her striking, landing a nice traditional dutchie (hook low kick combo) before going upstairs for another high kick with a right hand behind it!

Jindrova is landing big so far as Fayzallanova drops to the canvas briefly! Fayzallanova is able to clinch up and end the onslaught, at least temporarily before Jindrova lands a knee before that belt and the referee stops the action temporarily.

Halfway through round 1 and so far it’s all Jindrova as the fighters reset.  Fayzallanova is able to clinch but Jindrova defends beautifully before a hard sprawl sees Jindrova land on top and start raining down punches. Fayzallanova gets back to her feet and seems to be in survival mode, turtling up as Jindrova pours on the damage and the ref looks very closely at stopping the bout.

Jindrova now winds up on top, postures up, and lands some big ground and pound before the ref decides he’s seen enough!

That’s a Quick Six for Martina Jindrova as she clinches a playoff spot!

Martina Jindrova clinches a playoff spot with a dominant TKO win and a 1st round finish!