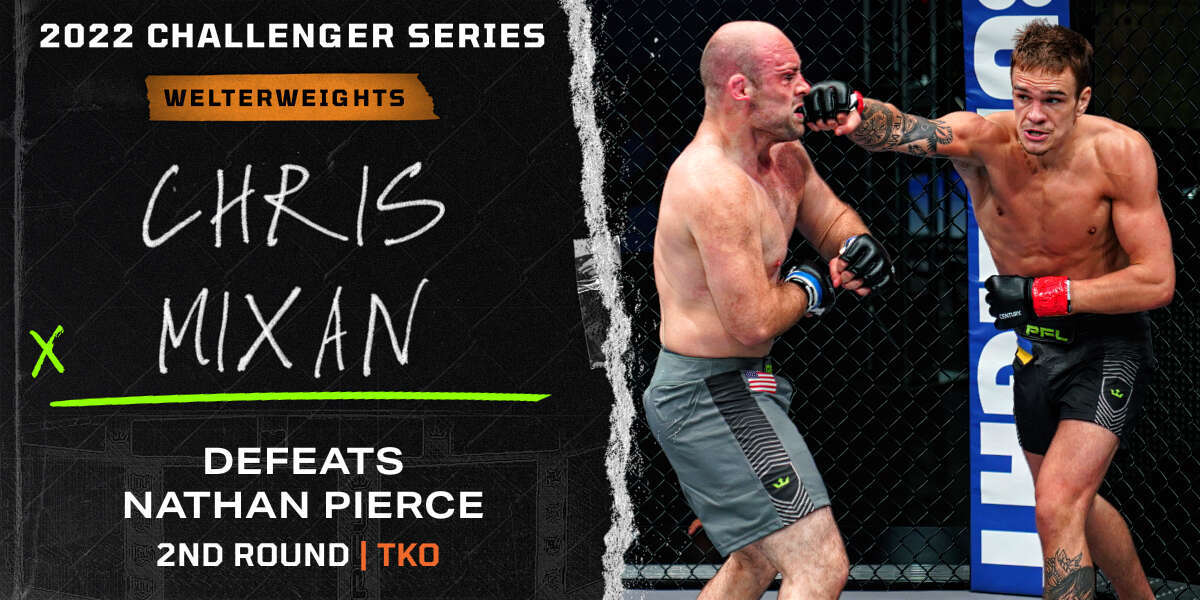 Mixan Puts on Clinic for TKO Finish Over Teammate Pierce

Yes, you read that correctly: Teammates.

Which welterweight would get it done Friday evening to cap off Week 2 and earn a similar reward?

With Mixan vs. Pierce, fans were treated an interesting matchup from the jump, as two teammates squared off for a chance at glory.

Both fighting out of Pete White Boxing and MMA in Port Orange, Fla., Mixan and Pierce understood the assignment. One man would win. One man would lose. And that winner would enjoy a unique and special opportunity to capture a PFL contract.

In the end, a surprising finish took center stage, as the then-2-0 Mixan overwhelmed the more experienced Pierce with body shots, earning the TKO finish in Round 2.

Chris Mixan gets the first W of the night! That performance was 🔥🔥🔥#PFLonFuboTV pic.twitter.com/IS4Zrfdvve

While the finish was sweet for him, Mixan acknowledged the two knew each other well from the many sessions inside the gym, and he remained humble during his post-fight interview.

“I knew my range,” Mixan said after the fight. “He’s a scrappy dude. He’ll make any [fight] ugly. We train a lot, as you guys know… My strength in any fight is my boxing. I go into every fight looking to scrap, and my advantage [is] my length, my boxing, like I said.”

The celebrity panel of Ray Lewis, Tyron Woodley, and Jeremy Piven acknowledged those skills as well, lauding Mixan’s discipline and composure while also complementing his ability to stay humble throughout the fight.

“I’mpressed’ is an understatement. He peppered the steak before he fried it,” Woodley said of Mixan’s surgical finish.

“This kid is so humble, he has so much going on in the Ukraine and he was focused, and his striking was beautiful,” Piven said. “... He has an incredible future.”

With the win, Mixan moves to 3-0 and puts himself one step closer to an official PFL contract.