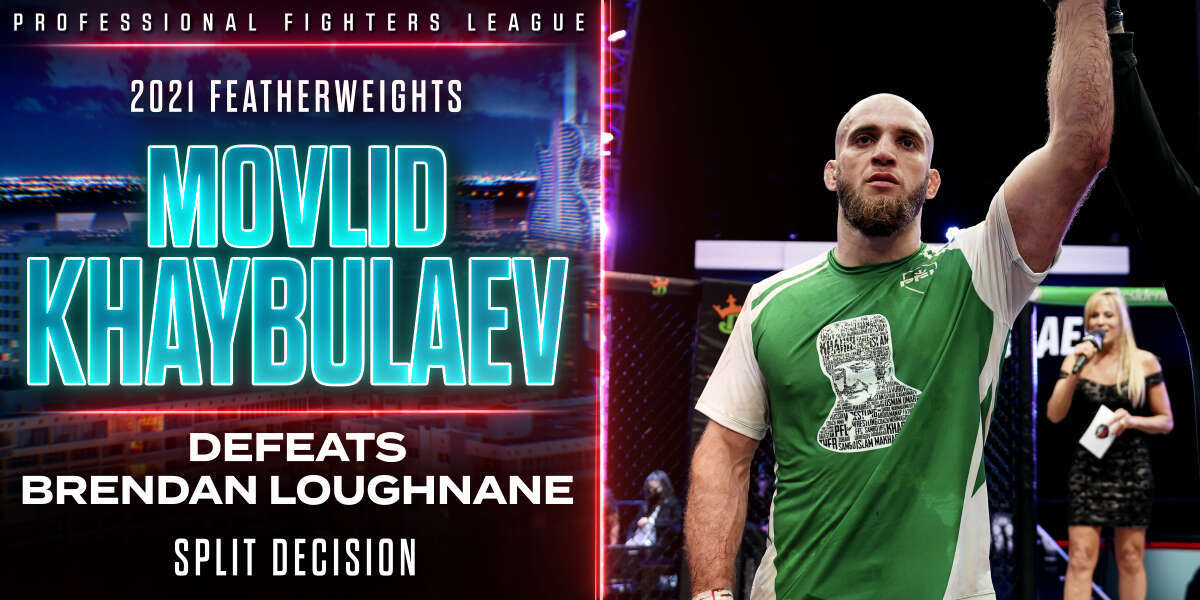 Wrapping up a thrilling night of action in the PFL Playoffs was a matchup in the featherweight semifinals between No. 4 seed Movlid Khaybulaev and No. 1 overall seed Brendan Loughnane.

The winner takes on Chris Wade, who dominated Bubba Jenkins in the co-main event, for the $1 million championship on October 27.

Khaybulaev (17-0-1, 1 NC) entered the bout with an undefeated record. Appropriately nicknamed "Killer", the Dagestan native trains with former UFC Lightweight Champion Khabib Nurmagomedov. Throughout the PFL Regular Season, Khaybulaev honored Khabib's father, Abdulmanap who died of COVID-19 complications in the summer of 2020, with a shirt featuring his face before and after bouts. Khaybulaev, who is the owner of the fastest knockout in PFL history thanks to a 10-second flying knee against Damon Jackson in 2019, is fresh off of a win over two-time PFL Featherweight World Champion, Lance Palmer and will look to keep his unbeaten streak alive.

Loughnane (21-3) entered the main event on an impressive seven-fight winning streak. The Manchester, England native is the top seed in the Season thanks to two Regular Season wins over Tyler Diamond and Sheymon Moraes. In the Regular Season opener, Loughnane put all of his opponents on notice with a first-round knockout.

Loughnane continued to throw kicks to start the second frame while Khaybulaev continued his patient approach. Loughnane fired off a nice right hand, but found himself with his back to the fence as Khaybulaev picked a leg and quickly worked for his back. Khaybulaev got in one of his hooks as Loughnane attempted to make his way back to his feet, using it to break Loughnane’s base and again asserting his power and control. Loughnane attempted to break free from Khaybulaev’s grip with some hand fighting, but ended up being on the receiving end of some vicious ground-and-pound from the Dagestan native.

Loughnane knew he needed a finish entering the final round of the fight and took the center position in the cage while stalking Khaybulaev. Wade was setting the pace and stunned Khaybulaev with a heavy uppercut followed by an overhand right. The strikes busted open Khaybulaev’s nose. Khaybulaev was looking to circle away but Loughnane stayed in pursuit of the finish. Khaybulaev eventually regained his wits and went on the offensive with a strong flurry that sent Loughnane retreating. Unfortunately for Loughnane, he ended up with his back to the cage and was quickly put on his back by the Nurmagomedov training partner. Once on top, Khaybulaev regained control of his opponent and held Loughnane against the fine as the clock wound down. Loughnane would make one final attempt to return to his feet, but he was pulled back to the mat as the final buzzer sounded.

Two semifinal bouts, two dominant performances. With his strong showing over Brendan Loughnane, Khaybulaev’s ticket to the PFL Championship is officially set in stone. Khaybulaev will be taking on Chris Wade, who earned his spot in the final after three consecutive years of semifinals, in the main event of the night. All eyes will be on the undefeated rising star as he looks to cap off an impressive Season with the $1 Million prize on October 23.