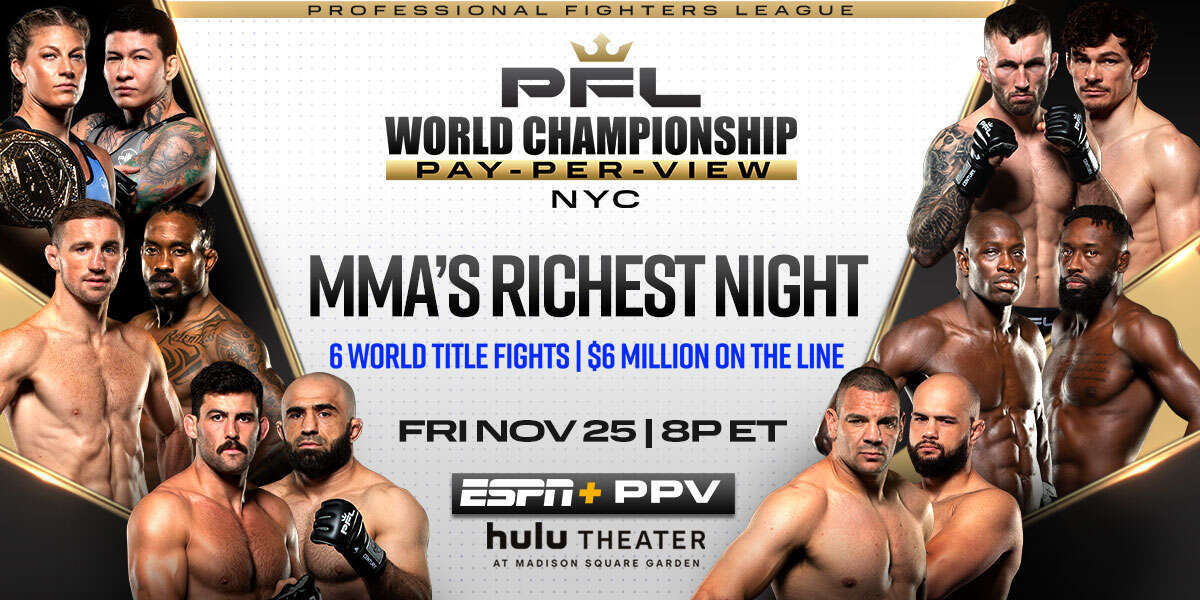 ESPN+ Available on ESPN.com and ESPN App for Mobile and Connected TV Devices

The evening’s main event will see MMA superstar Kayla Harrison face off against knockout artist Larissa Pacheco for the PFL Women’s Lightweight World Championship. With a win, Harrison will become the first person to win three PFL titles and further bolster her claim as the best female fighter in the world. It won’t come easy as Pacheco enters the matchup on the best run of her career, with her last five wins coming by way of first round knockout. These two last met in the 2019 PFL Finals, with Harrison earning her first World Championship via unanimous decision after five rounds.

British Featherweight Brendan Loughnane put on the performance of a lifetime in a one-sided drubbing of top-seeded Chris Wade in the semifinals, clinching his first appearance in the PFL World Championship. He’ll face another wrestling standout in American Bubba Jenkins, a former Division 1 NCAA champion, with a life-changing opportunity on the line.

One of the most significant signings in PFL history, Shane Burgos will make his highly anticipated debut in his hometown when he steps into the SmartCage on November 25. A rising star in the featherweight division, Burgos will face Marlon Moraes as he looks to build momentum heading into his first Regular Season in 2023.

“I am excited to announce the 2022 PFL World Championship is set for Friday, November 25 and the stage doesn’t get any bigger than ESPN+ PPV in primetime staged live from New York City at Hulu Theater at Madison Square Garden,” said PFL CEO Peter Murray. “This special pay-per-view holiday event is stacked with star talent and championship drama as PFL will deliver fans six world title fights with six belts and $6 million on the line headlined by undefeated superstar Kayla Harrison in the biggest fight of  her career against Larissa Pacheco, who has five consecutive first round knockouts coming into this epic season finale. The PPV card will also feature “Hurricane” Shane Burgos and Marlon Moraes facing each other in their PFL debuts.”

Tickets for the biggest night in MMA are available here with prices ranging from $70 - $195 with VIP tickets available for $600.

PFL is the first and only MMA league with a true sports-season format where elite fighters from around the world compete in a Regular Season, Playoffs and Championship. The four competitors in each division who earn the most points in the Regular Season advancing to the win-or-go-home Playoffs, followed by the biggest night in MMA – the PFL World Championship – with each winner going home with the $1 million prize.

Professional Fighters League is the No. 2 MMA company globally and features an elite talent roster. PFL has live event coverage in 160 countries on leading distribution platforms and delivers a unique, innovative product to MMA fans around the world.

PFL airs in the U.S on ESPN and ESPN+ and is broadcast and streamed worldwide to 160 countries, with partners including Channel 4, DirecTV, RMC Sport, Eurosport, Sky Sports, and more. The PFL roster is world-class, with 25% of PFL fighters independently ranked in the top 25 in the world. The PFL proprietary SmartCage data and analytics platform powers real-time betting and provides next-gen viewing experience.

About ESPN+
ESPN+ is the industry-leading sports streaming service that offers fans in the U.S. thousands of live sports events, original programming not available on ESPN’s linear TV or digital networks and exclusive editorial content from dozens of ESPN writers and reporters. Launched in April 2018, ESPN+ has grown to more than 22.8 million subscribers. Fans sign up to ESPN+ for just $9.99 a month (or $99.99 per year) at ESPN.com, ESPNplus.com or on the ESPN App (mobile and connected devices).